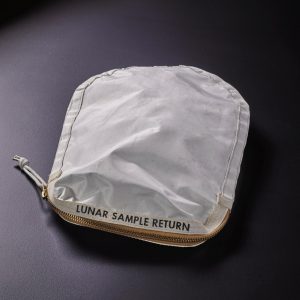 This is the Apollo 11 Contingency Lunar Sample Return Bag used by Neil Armstrong to collect the first lunar dust sample taken on the Moon. The final sale price is expected to reach seven figures, but if you want to place a bid, check out the listing on eBay on July 20th.

Sothebys has announced that it will auction off highly collectible memorabilia on Ebay Live Auctions. The auctions will occur on July 20th and include valuable space-flown artifacts that include the sample bag that Neil Armstrong used to gather moon dust during the Apollo 11 lunar landing. This item, which has been authenticated by NASA and is formally labeled the “Apollo 11 Contingency Lunar Sample Return Bag” in NASA records, is expected to sell for between $2 million and $4 million.

Space enthusiasts won’t miss the fact that July 20th is the anniversary of the Apollo 11 lunar landing, which saw men walking on the Moon for the first time. The Contingency Lunar Sample Return Bag was included by mission planners due to concern that something might go wrong during the first EVA on the moon. Neil Armstrong used it to get a sample of fine dust that massed 500 grams within the first few minutes of the moonwalk so that the crew wouldn’t return empty-handed if they had to abort during the EVA.

Other highly collectible items that are up for auction on July 20th include a Lunar Globe signed by Alexei Leonov and eight American astronauts, a 1961 signed official records file of USSR cosmonaut Yuri Gagarin from Sputnik Vostok, a mission flown Apollo 9 altimeter cover, Apollo 10’s official Snoopy the Astronaut mascot, one of the earliest ever Space Shuttle Orbiter computer processors, and a Gemini G1c spacesuit thermal cover layer made to fit Gus Grissom.

Although Sothebys vouches for the legality of the sale of items like these, some have questioned the legality and the ethics of auctioning off artifacts from the height of the Space Race for private profit. A nonprofit organization called For All Mankind, which is dedicated primarily to preserving the Apollo landing sites, especially criticized Sothbys for selling off items like the Contingency Lunar Sample Return Bag for private gain.

For All Mankind co-founder and space lawyer Michelle Hanlon said in a statement, “We formed For All Moonkind with a mission to ensure the Apollo landing sites be recognized by the United Nations for their outstanding value to humanity and protected for posterity. The decision by Nancy Lee Carlson and Sotheby’s to auction off an Apollo 11 Lunar Sample Return Decontamination Bag is a sobering wake-up call. The bag belongs in a museum, so the entire world can share in and celebrate the universal human achievement it represents.”

A federal judge, however, has denied NASA’s request to have the bag returned to NASA’s custody. In this light, a best case scenario is that the Lunar Sample Return Decontamination Bag and other valuable artifacts be sold to a museum or a collector who can truly appreciate what they have purchased.

This is a rare chance to bid on some unique and hard-to-find space collectibles and artifacts that have been used on actual Gemini and Apollo missions. If you aren’t already a member of eBay, don’t forget to sign up so that you can bid on these items on July 20th.