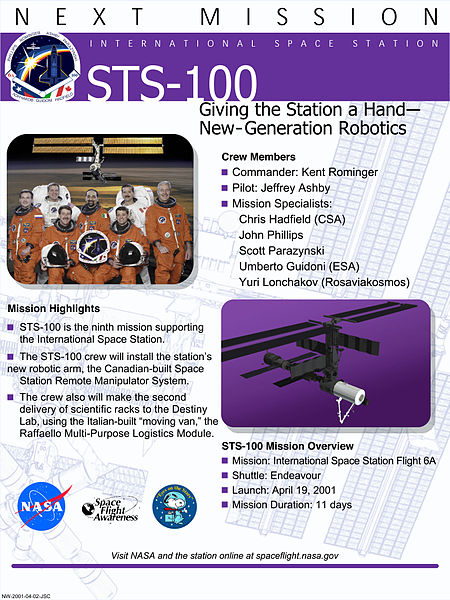 The Canadian-built Canadarm2 is installed and goes into action. 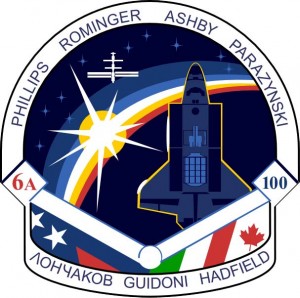 STS-100 featured a crew representing several of the major partners of the International Space Station, including Chris Hadfield from Canada, Umberto Guidoni from the European Space Agency, Yuri Lonchankov from Russia, and Shuttle Commander Kent Rominger, Pilot Jeff Ashby, and Mission Specialists Scott Parazynski and John Phillips from the United States of America. Cargo included the final components for the SSRMS “Canadarm2”, the Raffaello Multi-Purpose Logistics Module (MPLM) which contained experiments and experiment racks and an Ultra-High Frequency communications antenna.

Endeavour launched on April 19, 2001 and docked with the International Space Station on April 21. Expedition 2 provided a battery-operated drill for the first EVA on April 22. Hadfield became Canada’s first spacewalker. He and Parazynski installed the UHF antenna on Destiny. Guidoni used the RMS to retrieve the Canadarm2 and mount it on Destiny. The two spacewalkers attached cables and extended the two booms. In the space station, Helms and Voss performed tests to verify that the Canadarm2 was functional. 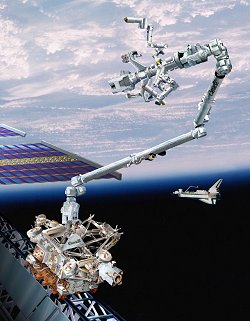 The next day, the two crews opened the hatches to transfer cargo. Canadarm2’s joints were tested and moved it off its pallet. It could move end-over-end using end-effectors on each end to grasp Power and Data Grapple Fixtures on Destiny. Parazynski used the RMS to transfer Raffaello to the Unity’s nadir CBM. Over the next few days, Raffaello would be unloaded with supplies remaining on the space station and loaded with items going back down. Two more EXPRESS experiment racks were transferred to Destiny. Rack 1 had to be moved quickly due to experiments that couldn’t go for very long without power. These experiments included studies of plant growth, biological crystal growth, drug fermentation and vibration measurement systems. Rack 2 didn’t have to be activated until after STS-100 had left, so its transfer was a little easier.

Once the initial transfers were complete, the shuttle crew returned to Endeavour and began preparations for the second EVA. Hadfield and Parazynski connected power and data cables to the Power and Data Grapple Fixture that Canadarm2 was currently attached to. When a backup power supply failed, the two spacewalkers removed a panel and adjusted some cables to bring it back online. Then, Hadfield removed a now-obsolete Early Communications System antenna. When the spacewalk was over, Canadarm2 moved its first cargo with Helms at the controls. It lifted an 1,360-kilogram pallet from Destiny and tested its ability to handle the load with a series of maneuvers.

Problems with the Command and Control Computer 1 (C&C-1) forced the combined crews to shelf plans for work with Canadarm2 the next day. Meanwhile, work to transfer cargo from Rafaello continued. Most were experiments sponsored by the Centers for Commercial Development of Space. When another Command and Control Computer failed, the station was down to one controlling computer. Houston suspected a software issue. Working with a laptop, Helms coordinated with controllers to troubleshoot the problem. She was able to get C&C-1 back up and running and sent data from the computer down for study. C&C-1 was removed to be returned to Earth and replaced with a backup computer. The mission was extended for two days to compensate for time lost while dealing with the computer issue.

With transfer of cargo complete, Parazynski retrieved the Raffaello module and replaced it in the Endeavour’s bay. The Endeavour and station crew performed routine maintenance and installed new hardware. On April 28, Helms performed another series of maneuvers with Canadarm2, which was still holding the pallet, and finished with the pallet over Endeavour’s bay. Hadfield used the RMS on Endeavour to grip the pallet and Canadarm2 released its hold for the first “hand-over” between two remote manipulation systems in space. With a tight schedule due to the planned arrival of a Soyuz, the shuttle crew finished up their planned activities and closed the hatch for the final time on April 29. Two days later, Endeavour landed at Edwards Air Force Base. 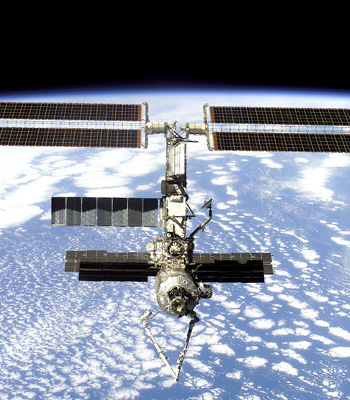