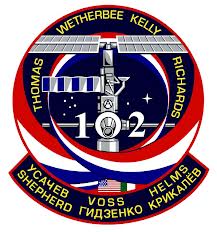 When the launch of STS-102 was delayed, Expedition 1 was forced to extend their stay into March. Discovery launched on March 8, 2001, with the Multi-Purpose Logistics Module “Leonardo”, which contained six systems racks and two storage racks for the Destiny module. Also on board was components for the Space Station Remote Manipulator System (SSRMS), an enhanced 17-meter-long version of the shuttle’s Remote Manipulator System that would become more widely known as Canadarm2.

The Expedition 2 crew consisted of James Voss, Yuri Usachev and Susan Helms. Yuri Usachev would be in command of this Expedition. He had served on Mir twice as a Board Engineer and also flown on STS-101. Voss had previously flown four times on the space shuttle, including the STS-101 mission to the ISS, and had been a backup crewman for Mir. Susan Helms had previously flown four space shuttle missions. As Expedition 1 prepared for the handover, Discovery spent the next couple of days making rendezvous maneuvers and caught up with the space station on Day 3. Docking was delayed while Houston tried to verify that some photovoltaic arrays on P-6 were in the correct attitude to prevent contamination from the shuttle’s thrusters. Finally, they were given the “Go” for docking at 0138. After a welcoming ceremony, Usachev transferred his seat from Discovery to Soyuz-TMA 31 while Gidzenko performed the same procedure with his seat in reverse. When the Discovery crew retreated to the shuttle, Usachev stayed behind for an update on the state of the station.

In the meantime, Susan Helms and James Voss began preparations for an EVA scheduled for Day 4. The EVA began with the two spacewalkers disconnecting cables from PMA-3 on Unity. Then, they went around to the port CBM and removed an antenna that was part of the Early Communications System. Mission Specialist Andrew Thomas used the Remote Manipulation System on Discovery to remove PMA-3 from the nadir CBM and attach it to the port CBM. Voss and Helm stood by to render assistance if necessary. Thomas experienced no difficulties and the spacewalkers returned to Discovery after an EVA of 8 hours and 56 minutes, a new record for the space shuttle program.

At the beginning of Day 5, Krikalev and Voss switched their seats on the Shuttle and Soyuz. Mission Specialist Andrew Thomas used the shuttle’s RMS to lift Leonardo out of the bay. A misaligned camera on the CBM caused a delay with berthing it on Unity’s nadir port. Once William Shepherd aligned the camera, Thomas maneuvered it into place and shuttle commander James Wetherbee engaged the bolts.

On Flight Day 6, Andrew Thomas and Paul Richards made the second EVA of the mission. This EVA would take them across a lot of the space station, so James Kelly used the Remote Manipulation System to move them from one location to another. They began by connecting electrical cables between Destiny and the Cradle Assembly. This would provide power for the SSRMS once it was installed. Inside the station, Shepherd checked the power converters on Leonardo and verified that the Cradle Assembly was functional. Richards and Thomas maneuvered their way to P-6 and tapped at a strut that had failed when it had been connected to the Z-1 Truss Structure until it fell into place. They also checked the malfunctioning Floating Potential Probe, which still wasn’t downloading any data, and reported that its status lights weren’t lit up. Next, they retrieved the External Stowage Platform from Discovery’s payload pay to install on Destiny’s exterior. They hooked up electrical cables that provided enough power to activate its heaters. They took photographs of vents on Unity and Zvezda and then returned to Discovery.

While their comrades were working outside, Shepherd, Usachev and Voss unloaded equipment racks from Leonardo to install in Destiny. These included the Human Research Facility for medical research and the phone-booth-sized EXPRESS rack, which housed a computer workstation and laptop interface for storing and downloading data to Earth along with expanded facilities for experiments. Unloading continued the next day and Shepherd and Helms performed their seat swap. During Day 8, Voss and Helms installed a workstation for the space station’s RMS inside Destiny and the now-empty Leonardo was loaded with trash and unwanted items from the space station.

During a news conference on Day 9, Shepherd expressed his satisfaction with what Expedition 1 had accomplished. “We basically put the station in commission. We have taken something that was an uninhabited outpost and we now have a fully functional station where the next crew can do research. I think that is the substance of our mission.” The last of Leonardo’s cargo was transferred to the station and Leonardo was closed up. On Day 11, Thomas used the RMS to transfer Leonardo back to its bay on Discovery. Some of the shuttle’s systems had become cold enough for water to freeze in the water lines and two of the onboard computers were powered up in the hope that it would generate enough heat to thaw it out.

On March 18, 2001, William Shepherd transferred command of the space station to Yuri Usachev and the crews said their farewells. Discovery undocked at 2332 that day, performed fly-around maneuvers, and made the separation burn at 0048 on March 19. Discovery landed at the Shuttle Landing Facility at 0231 on March 21.

What did shuttle astronauts use to train for these missions, anyway? Well, they have simulators for the shuttle, a Neutral Buoyancy Tank for EVA, and centrifuges for training to withstand the acceleration of launch. Here’s a look at the Space Shuttle Trainer.