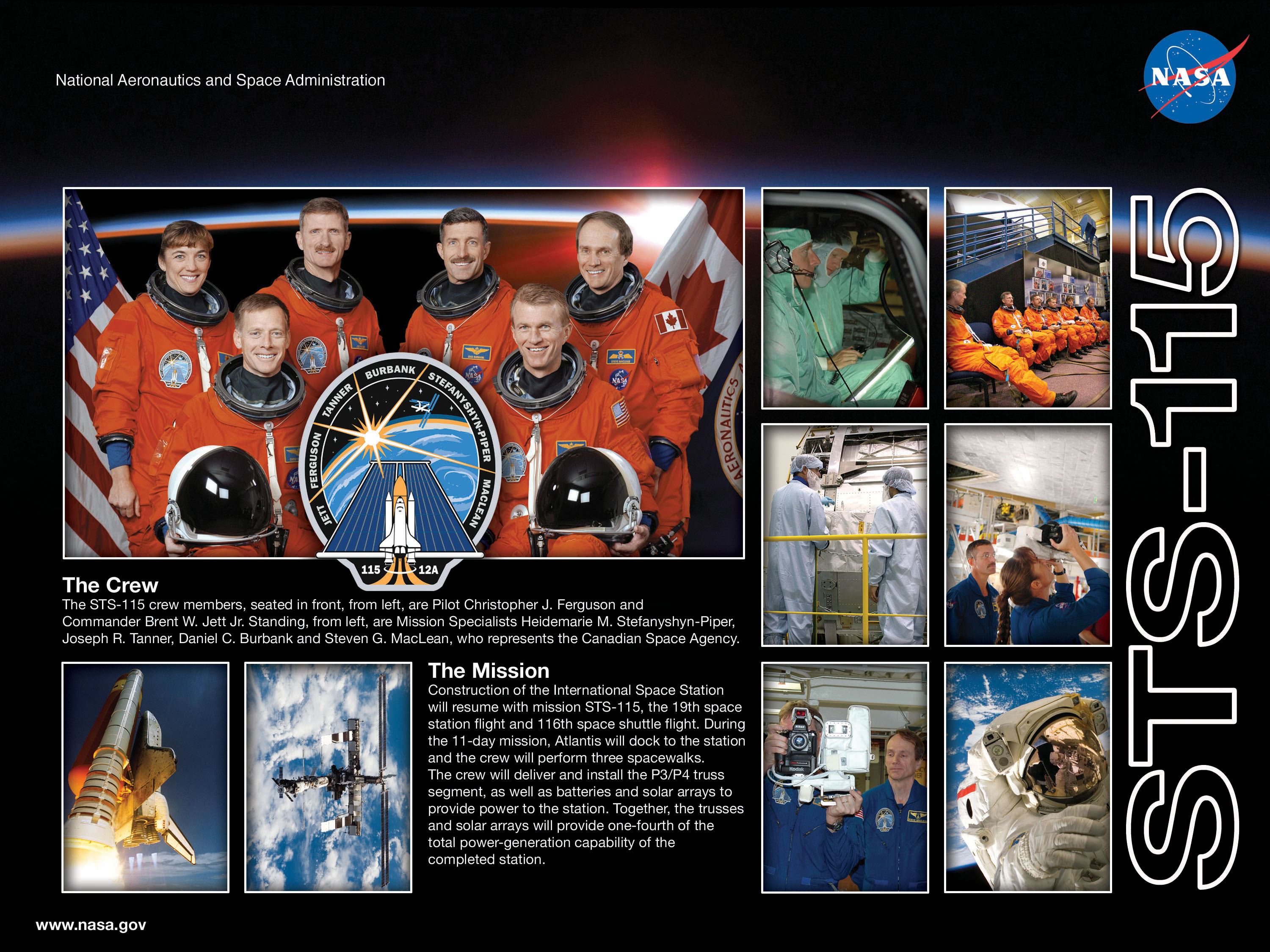 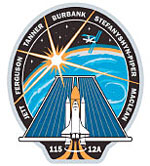 A series of delays plagued STS-115, including foul weather that included a lightning strike on the conductor on the top of the launch structure tower. That pushed back the launch until August 28 so that ground crews could carry out systems checks. Then, Hurricane Ernesto threatened the area around the Kennedy Space Center. Rather than risk the Atlantis, ground crews began to roll it back to the Vehicle Assembly Building. Then, Ernesto changed course, so they rolled it back to the launchpad. Lighting adjustments had to be made to fill the requirements of cameras that filmed the External Tank during launch. NASA management was starting to get a little exasperated. Although the launch could continue to be postponed until the end of the window on September 13, they wanted to launch by September 7 so that the Soyuz schedule could proceed smoothly.

Things finally pulled together enough for the launch to go off at 11:15 on September 9. Brent Jett commanded the STS-115 mission with Christopher Ferguson as pilot. The Mission Specialists were Joseph Tanner, Danial Burbank, Heidemarie Stefanyshyn-Piper and Canada’s Steven MacLean. The External Tank did lose a few pieces of foam in the upper atmosphere and mission managers believed that they didn’t have enough energy to do any critical damage. Tanner and MacLean got some good images of the External Tank as it was jettisoned.

Atlantis rendezvoused with the International Space Station on September 11. Capcom Pam Melroy joked, “Station, we see you have visitors. Tell them to give us a wave.” The Shuttle crew performed the R-Bar Maneuver while the Expedition crew took pictures for analysis, and then the Atlantis docked to PMA-2. Ferguson and Burbank activated the Shuttle’s robotic arm (RMS) and lifted the P-3/P-4 truss structure out of Atlantis’ payload bay. He maneuvered the truss structure to a position where it could be handed over to Canadarm2.

Pressure and leak checks between the space station and Atlantis went smoothly and the hatches opened at 08:30. The combined crews went through the usual greetings and safety briefs, and then MacLean and Williams used the Canadarm2 controls to complete the handover of the new truss structure and move it over to its permanent position at the free end of the P-1 Truss. It was left overnight while it thermally stabilized in its new environment and the final preparations for STS-115’s first EVA were made. Tanner and Stefanyshyn-Piper spent their sleep period in Quest with the pressure reduced to cut down on the amount of time needed to remove the nitrogen from their systems. 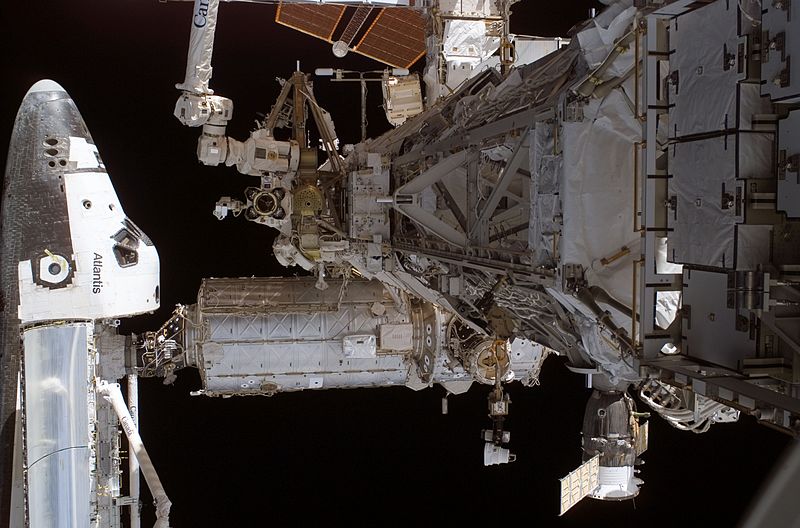 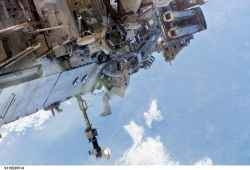 The first EVA of the STS-115 assembly mission began at 05:17 on September 12, 2006. This was the first EVA for Heidemarie Stefanyshyn-Piper and sixth for Joseph Tanner, who was described by crewmates as “the king of EVA.” The spacewalkers collected tools and maneuvered to the new truss structure, which included new solar panels. They connected power cables and released launch restraints on the Solar Array Blanket Box and Beta Gimbal Assembly. They also configured the Solar Alpha Rotary Joint (SARJ) so that it could move with the sun’s position.

They had gotten ahead of schedule, so they took care of removing the covers from SARJ’s launch lock bars, which had been slated for the second EVA. A washer and a bolt had worked themselves loose and drifted off to join the collection of space litter. After that, they returned to Quest after an EVA duration of 6 hours and 26 minutes.

Also known as, “How many astronauts does it take to unscrew a bolt?” 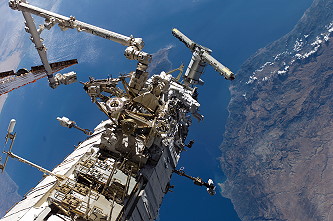 Burbank and MacClean during a spacewalk. Image credit Space Facts

Daniel Burbank and Steven MacLean began their EVA on September 13. Planned activities were entirely devoted to activating the SARJ. While releasing the launch locks, they had to wrestle with a stuck bolt with plenty of complaints about the lack of torque. They managed to get it free with a little teamwork. Then, they prepped the truss structure for installation of new equipment for the Mobile Base System (MBS).

With that done, they got a head start on tasks planned for the third EVA, which included removing a keel pin and drag link. They also removed a Space Vision System target used to insure the alignment of the Atlantis’ robotic arm and the International Space Station’s Canadarm2 during transfer of the truss structure. They also installed a temporary rail stop for the Crew and Equipment Translation Aid (CETA).

The two spacewalkers returned to Quest after an EVA lasting 7 hours and 11 minutes. The Houston control center spent the next four hours activating and checking out equipment on SARJ. The only fault found was the lack of talkback in one of the Drive Lock Assemblies, DLA-2, which indicated that it hadn’t engaged properly. They delayed the deployment of the P-4 Solar Array Wings (SAW) while they proceeded with troubleshooting and worked around it with a software update. Early in the morning of September 14, they ordered the SAWs to deploy, an operation that would take nearly five hours. 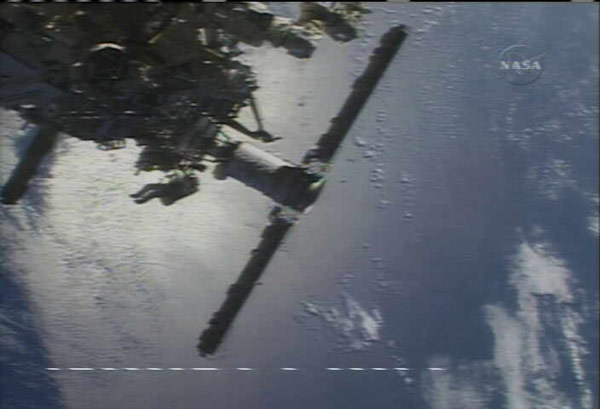 September 14 was a light day for the STS-115 crew while the Expedition 13 crew continued transferring cargo between the Atlantis and the space station. Canadarm2 was moved from the MBS to Destiny. The SAW units began producing power though it would only be used by systems on the new truss segment until the electrical system was rewired and cooling system activated during a future space shuttle flight.

During the pre-breathing ritual in preparation for the third EVA, a power controller tripped out, causing a loss of power to the depressurisation pump in Quest. Wearing face masks, Tanner and Stephanyshyn-Piper transferred to the Unity module while troubleshooters on the ground determined that the cause was a momentary power spike. Once the breaker was reset and the pump rebooted, the two EVA astronauts began their EVA with a delay of only 45 minutes.

Tanner moved to the P-6 Beta Gimbal Assembly that helped control the pitch orientation on the solar arrays and installed shoulder bolt retainers. He also worked with a four-bar hinge that had failed to engage early on in the space station’s construction. Stefanyshyn-Piper recovered the MISSE-5 experiment samples. Both astronauts removed hardware that had protected the Space Radiator on the new truss segment during launch and a new S-band antenna support assembly on the S-1 Truss to replace an old one that had failed. The old antenna would be returned to Earth eventually. For the time being, they just deployed a shroud to cover the failed antenna. Stefanyshyn-pyper set up a new base-band signal processor and transponder on S-1. Tanner installed a new heatshield to protect an antenna group interface tube from exposure to the sun. They installed an external wireless TV antenna, and then captured infrared video of Atlantis’ wings for analysis on the ground.

The EVA ended with a duration of 6 hours and 42 minutes with both astronauts joking around. “Kind of nice to be up here on top,” said Tanner.

Stefanyshyn-Piper, who had been an EVA rookie before the mission, commented, “Yes, but I didn’t get to look around much. At least I can say I’ve been here.”

Tanner said, “Not too many people have.” 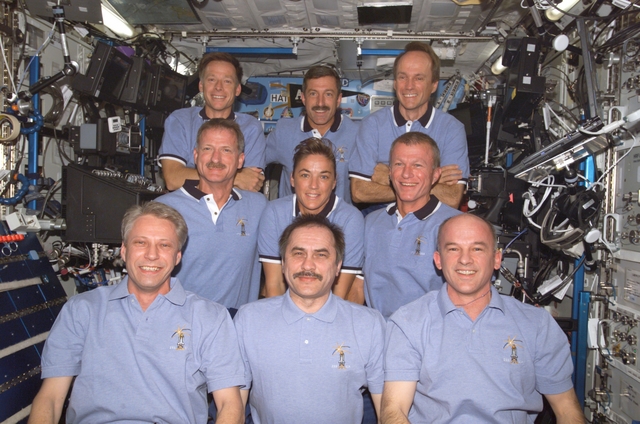 September 16 was a light day for the Atlantis crew that included a joint press conference, individual interviews and a joint crew photograph. At some point, the STS-115 crew got a photograph of Hurricane Gordon. The combined crews took care of a few final equipment transfers. Jett commented, “We are off to a good start. … We had a few small problems, but the team did a wonderful job of resolving them. I think it bodes well for the future.” 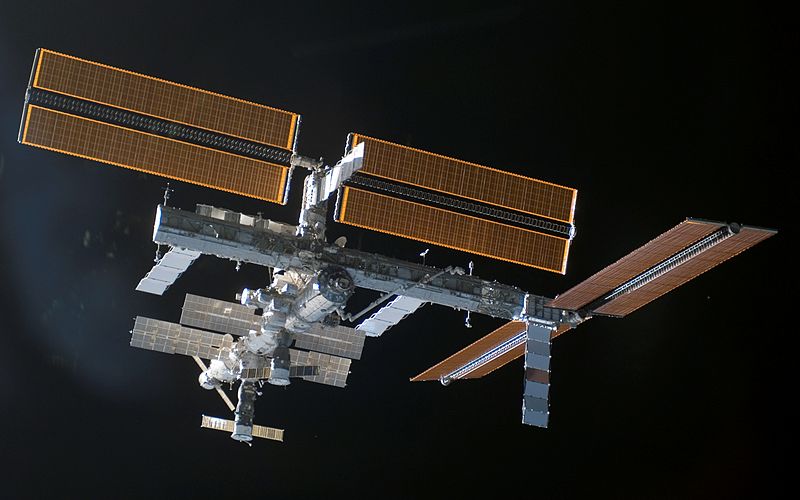 A view of the International Space Station with the new P3/P4 Truss. Image credit Online-Utility