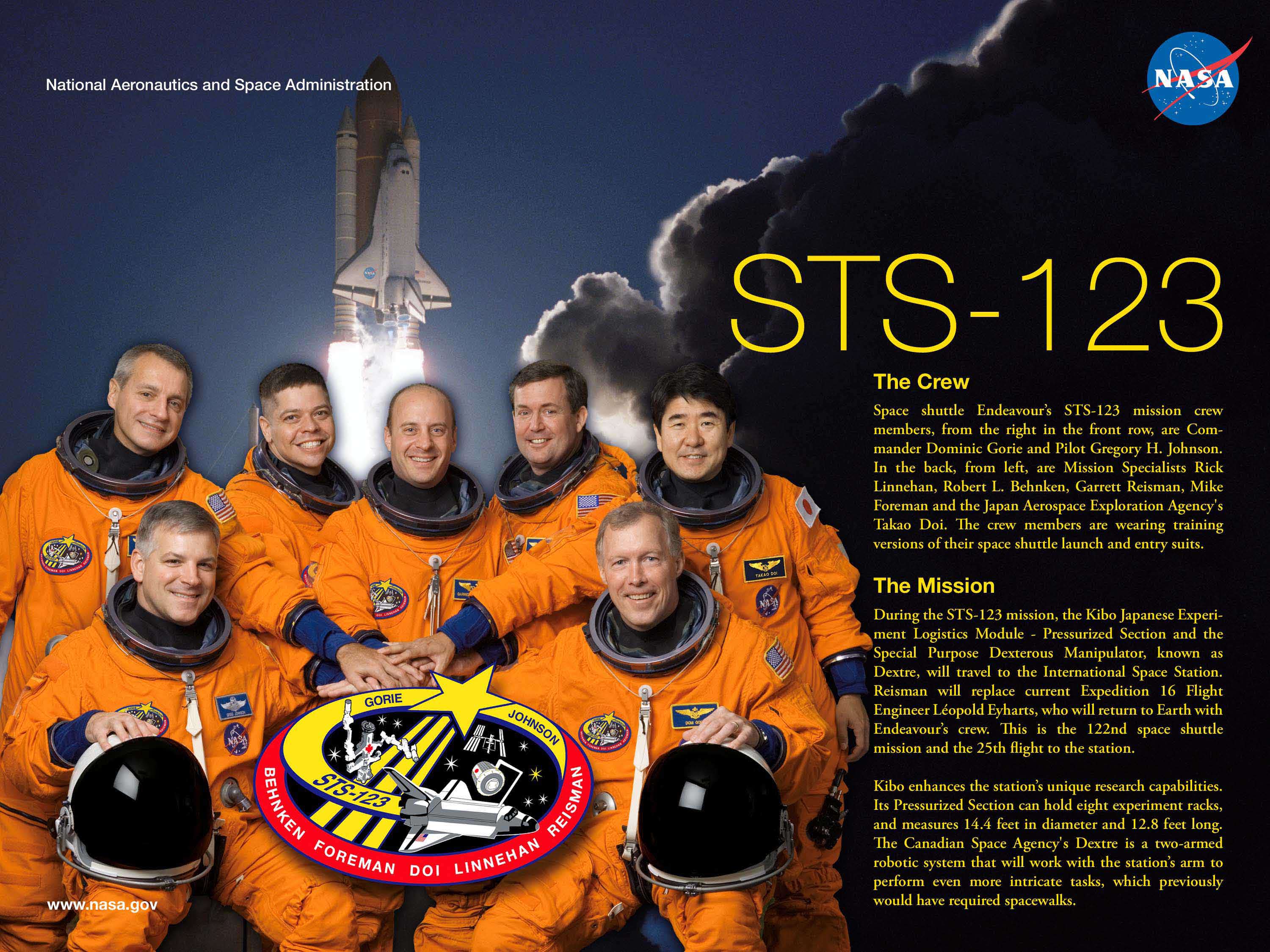 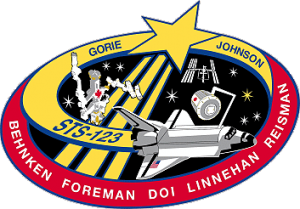 When astronaut Garrett Reisman applied to NASA as a potential astronaut, he had to appear before a panel headed by John Young, who had flown two Gemini, two Apollo, and two of the early Space Shuttle flights including the very first one. In pre-flight interviews, Reisman commented on how tough it was to appear in front of an accomplished national hero and figured that if he could make John Young laugh, maybe he had a chance. He succeeded, and now he would be joining the Expedition 16 crew on STS-123.

The Space Shuttle Endeavour was also slated to deliver the Canadian-built Special Purpose Dexterous Manipulator, nicknamed “Dextre”, along with components for the Japanese-built Kibo laboratory. Kibo was one of the largest modules for the space station and too large to conveniently fit in the Shuttle’s payload bay, so it had to be delivered in sections. STS-123 was delivering the Japanese Experiment Logistics Module, Pressurized Section, which contains critical avionics and serves as a storage location for experiments.

The delivery of the first components of Kibo was referred to as the climax of the mission, but the installation of Dextre was much more complex. Mission planners spread the installation process across four of the five EVAs planned for STS-123. Dextre consists of two “arms” and a central “torso” capable of rotating on command and can hitch a ride on either Canadarm2 or the Mobile Transporter. Originally designed to be operated by astronauts inside the space station, Dextre later received a software upgrade that allowed controllers on the ground to operate it.

This video, filmed in 2011, shows Dextre beginning the process of replacing a defective part on the International Space Station. 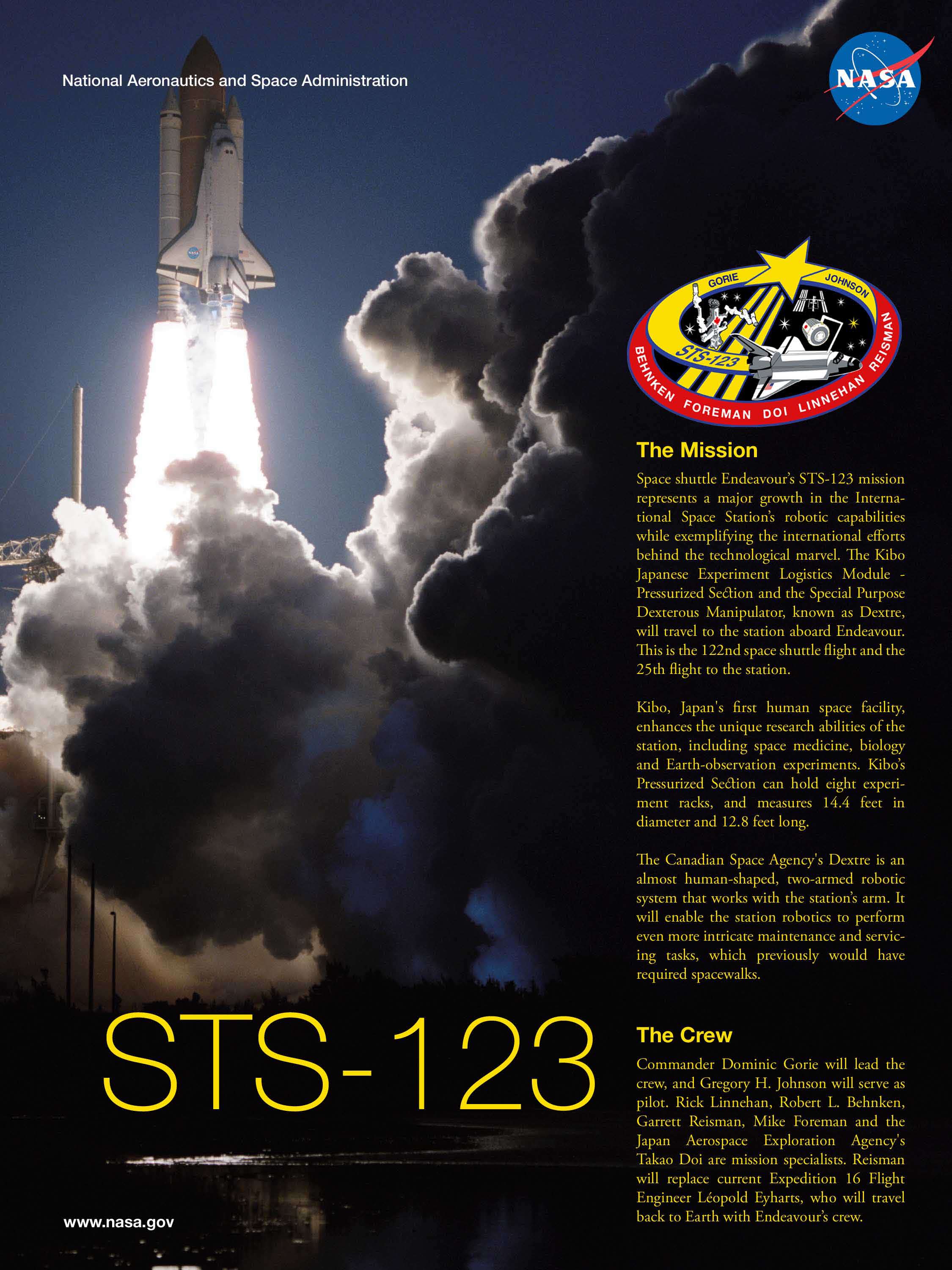 The Atlantis launched at 2:23 AM on March 11, 2008 and docked with the International Space Station on March 12. It was an ambitious record-setting mission with 12 days docked to the station and a total of five EVAs.

Once the hatches were open, the combined STS-123 and Expedition 16 crews took care of the usual greetings and safety briefings. Garrett Reisman transferred his couch liner from Endeavour to the Soyuz, thus officially joining the Expedition 16 crew. He was replacing Leopold Eyharts, who officially joined the STS-123 crew by performing the same transfer in reverse.

Garrett Reisman and Richard Linnahan began their preparations for the first EVA of the mission. The crew woke up on March 14, 2008, to the tune of the Bay City Rollers’ “Saturday Night”. After breakfast, the two EVA astronauts donned their EMUs and exited through Quest. Their task was to prepare the pressurized portion of the Kibo module for installation on the “Harmony” Node 2 module. They removed eight thermal blankets and unplugged a cable that transferred power from the shuttle to Kibo components that needed to be kept heated. The actual installation started with Japanese astronaut and STS-123 Mission Specialist Takao Doi and Shuttle Commander Dominic Gorie using Endeavours Robotic Manipulation System (RMS) to lift the new module out of its payload bay and over to its new home on the Harmony module. The EVA ended with a duration of 7 hours and 1 minute.

As the Japanese astronaut, Takao Doi was designated to be the first one who actually entered the pressurized Kibo module. “That’s going to be a very exciting, rewarding part of the flight,” Dominic Gorie had said of it before the mission. As a commemoration of the event, he presented the Expedition 16 crew with some chopsticks and had fun watching them use the chopsticks for meals in microgravity. The crew continued outfitting Kibo for use throughout the mission.

Richard Lennehan and Michael Foreman performed the second EVA of STS-123 on March 16, 2008. They worked on assembling the components for Dextre, primarily removing covers meant to protect it during launch and installing its two arms. One of the arms gave them a little trouble and the astronauts described it later as “the humans vs. the robots, and the humans won.” It was like manually assembling a Transformer and Dextre began to look like a three-dimensional stick figure of a human by the time they were done. The EVA lasted seven hours and eight minutes.

On March 17, Robert Behnken and Richard Lennehan began the third EVA of the mission to complete the assembly of Dextre. Shuttle Pilot Gregory Johnson and Garrett Reisman operated Canadarm2 during the spacewalk to give them a place to stow gear. The EVA astronauts installed a materials exposure experiment, and then proceeded to Dextre and installed a tool platform and tool holster assembly. This gave Dextre a place to keep its tools until it needed them. The EVA lasted 6 hours and 53 minutes.

March 18 featured Dextre’s first ride on Canadarm2. Dextre was moved from its pallet on Endeavour to a power and data grapple fixture on Destiny. Canadarm2 moved the pallet into Endeavour’s payload bay, and then moved Dextre to a point where it would be protected during a test of a tile repair method during the next EVA.

Robert Behnken and Michael Foreman began the fourth EVA on March 20, 2008. Proceeding to the shuttle, they applied a substance known as Shuttle Tile Ablator-54 (STA-54) using a tool similar to a caulk gun to evaluate its effects as a repair technique. They also replaced a circuit breaker on the exterior of the space station. The EVA ended with a duration of 6 hours and 24 minutes. 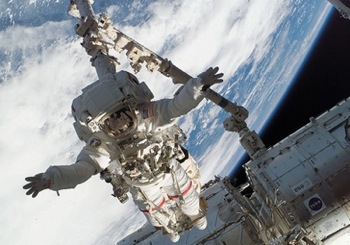 A sense of humor is practically required in the Astronaut Corp. Image credit Neon Tommy

Robert Behnken and Michael Foreman also participated in the fifth and last EVA of the mission on March 22. In this EVA, they moved the Orbital Boom Sensor System (OBSS) from the end of Endeavour’s robotic arm to a temporary place on the space station. This was part of preparations for STS-124, which wouldn’t have room for both the OBSS and future Japanese-built components of Kibo. They also replaced a new trundle bearing assembly on the starboard Solar Array Rotary Joint (SARJ), which had been showing signs of wear and tear that concerned ground controllers enough to assign multiple inspections during Stage EVAs, or EVAs without a space shuttle present. They inspected the SARJ and collected samples for analysis on the ground. The EVA ended with a duration of 6 hours and 2 minutes.

Sometimes robots are like some people I know. They just don’t want to wake up and go to work. Ground controllers did some troubleshooting and finally managed to wake it up.

The remaining joint operation duties took place during a slow day on March 23. They made the final cargo transfers, participated in a joint news conference and checked out rendezvous tools. The next day, the two crews said their final farewells. The Endeavour undocked on March 24. After a wave-off due to bad weather, the STS-123 crew performed a nighttime landing early in the morning of March 27, 2008. 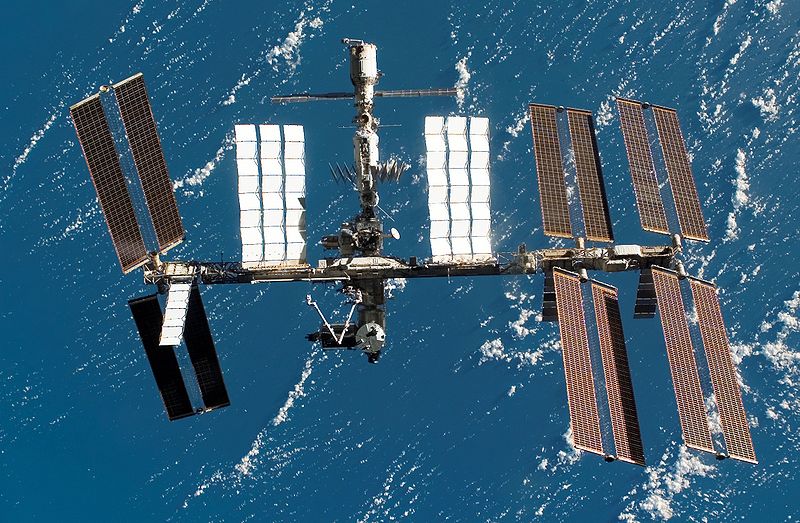 The International Space Station as seen from the departing STS-123. Image credit Wikimedia