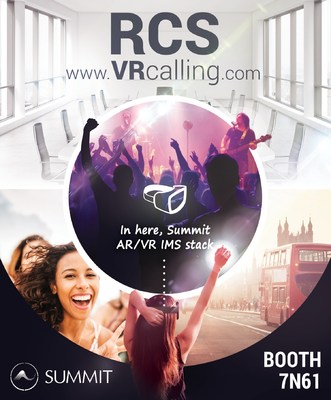 Summit Tech already has the capacity to enhance VoLTE- and CS Voice-based calling with the sharing of images, video and slideshows during calls made on mobile devices. Now Summit Tech is upgrading those capacities to make use of Virtual Reality technology for a more immersive experience with VR Calling. This solution enables wireless carriers to add support for RCS services such as IR.92/94 from within VR/AR environments.

Instead of isolating Virtual Reality users from real life, VR Calling can connect people to a 360-degree live video stream of a remote location and includes support for virtual environments. Users connect through globally standardized communication services such as RCS and VoLTE, ensuring mass reachability by allowing VR users to share their experience with, well, virtually anyone with a smartphone.

Oculus Rift, HTC Vive or Gear VR users connect to live VR streams, then by simply VRcalling their friends on RCS or ViLTE enabled devices, users share their experiences in real-time – no app required. Additionally, while connected to streams, users can publish their social presence allowing for communication between any user connected to the stream.

Some Use Cases for VR Calling

RCS is the next generation communication and conversation platform being deployed by operators with services ranging from enriched calling to chatbots. Not limited to RCS smartphones, users access VR calling through VR headsets or AR glasses for immersive experiences. Tablets and web browsers are easily accessible alternatives.

Alido Di Giovanni, President of Summit commented: “We want to empower operators to rapidly launch VR/AR services and secure new revenue streams.” Meaning that you may still have to pay for a ticket to that sporting event, but at least you won’t be competing for a limited number of seats and you can immerse yourself in the experience in a way that isn’t possible from watching it on a flat screen when you use VR Calling.