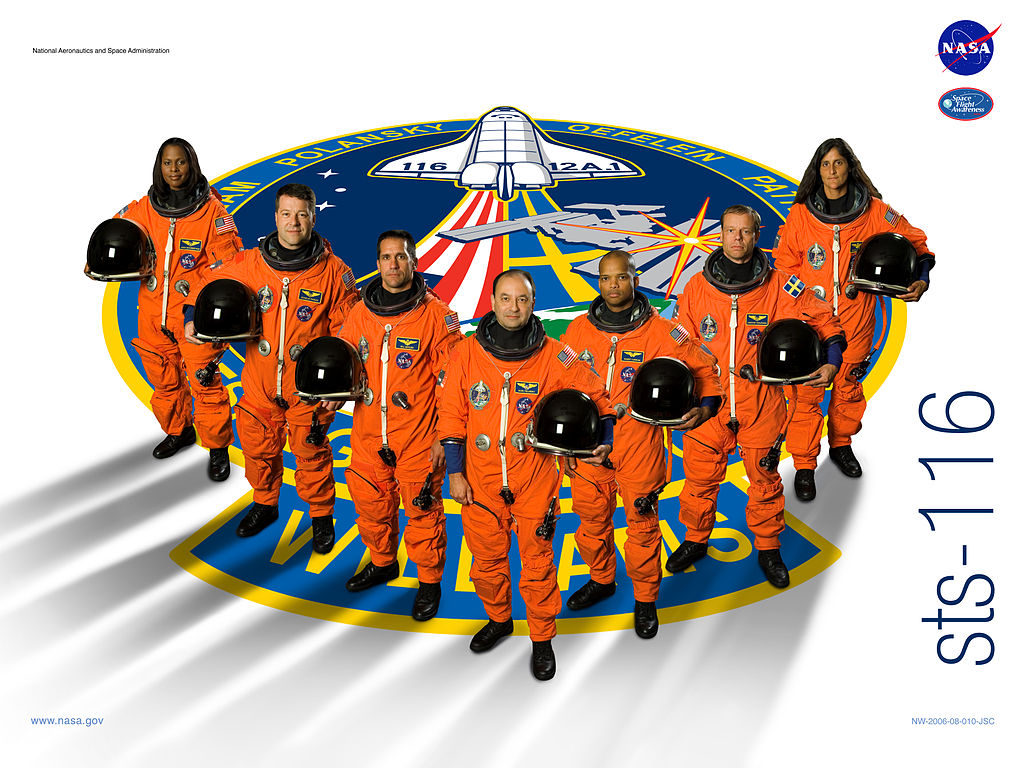 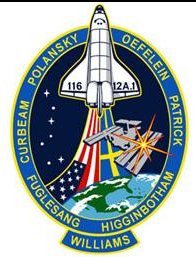 STS-116 was to be an important and complex shuttle flight for assembly of the International Space Station. Project manager Mike Suffrendi told reporters, “Many of us consider this the most challenging Space Station flight we’ve done. … When the Shuttle leaves, ISS will not look much different than when Discovery got there, but it will be a dramatically different vehicle inside.”

After being pushed back twice, once due to clouds on December 7, the Discovery lifted off with a spectacular night launch on December 9, 2006. The Mission Commander was Mark Polansky with William Oefelein serving as Pilot. Mission Specialists included Nicholas Patrick, Joan Higginbotham, Robert Curbeam, and the European Space Agency’s Christer Fuglesang from Sweden. In interviews, Christer Fuglesang expressed the hope that his mission would encourage interest in space, science and technology in his home country. 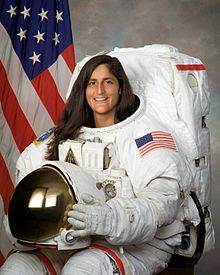 Sunita Williams would be joining the Expedition 14 crew as a flight engineer. During a press conference, Lopez-Alegria admitted that he was looking forward to seeing a fresh face: “[S]ix months with the same two faces all the time, if you don’t like one of those two faces, it could get old. At least, in this fashion, we will have the opportunity to change those faces once in a while.”

Once in orbit, Discovery was reconfigured for orbital maneuvers and spent the next two days going through the routine of catching up with the space station and using the onboard robotic arm (RMS) to inspect Discovery’s exterior for damage. Sunita Williams expressed her enthusiasm when the space station came into view: “Tally-ho on my new home. It’s beautiful. The solar arrays are glowing.” Discovery performed the R-bar pitch maneuver so that the station crew could take pictures and then talked to the station on December 11.

A vibration had been detected by Discovery’s port wingtip sensor after docking and the crew used the cameras on the RMS to inspect the area. Once this was done, the Discovery crew used the RMS to lift the P-5 Truss segment from the payload bay. The RMS handed off the truss segment to the Canadarm2, where it was left just over Discovery’s port wing overnight. This truss segment, along with the S-5 segment that would be delivered on a later flight, was an important precursor towards installing two larger solar array wings to help insure that they were properly spaced for optimum performance.

Sunita Williams transferred her couch liner from Discovery to Soyuz TMA-9 and brought her Sokol pressure suit on board, thus officially joining the Expedition 14 crew. Reiter transferred his couch liner and gear to the Discovery and was now part of the STS-115 crew. For the first couple of weeks, Williams would get some time each day to familiarize herself with life on the space station.

In the meantime, the entire STS-116 crew prepared for the first EVA. Curbeam and Fuglesang would make the actual EVA and Williams operated the RMS and Joan Higginbotham operated the Canadarm2. The two spacewalkers camped out in Quest overnight as part of pre-breathing procedures.

Sunita Williams called this one a “tricky installation.” Both the Discovery’s RMS and Canadarm2 were involved in this spacewalk and they had to watch out for electrically charged black boxes that could cause problems if hit. Clearances were pretty tight, about three inches. During training, the entire crew had spent a lot of time rehearsing this EVA. 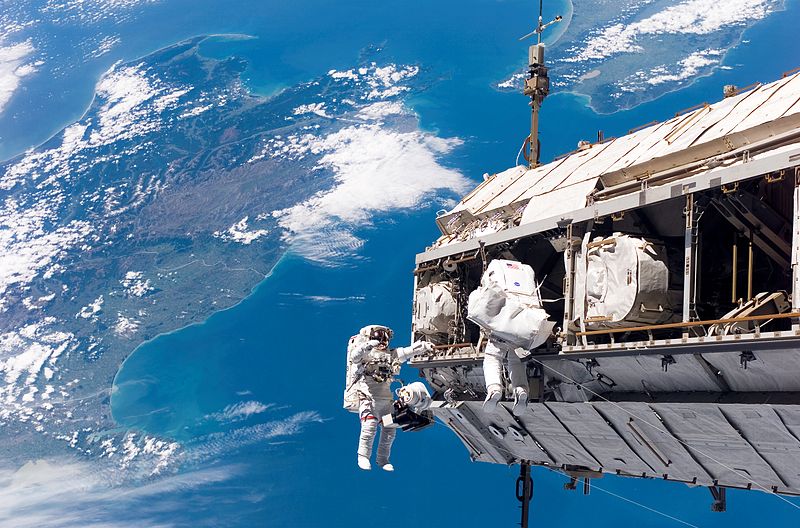 On December 12, Christopher Fuglesang and Robert Curbeam began the first EVA of the mission, exiting through the Quest module. The two spacewalkers made their way to the P-5 Truss and acted as extra pairs of eyes for Higginbotham as she used Canadarm2 to maneuver it into position. The two EVA astronauts bolted it into its final position.

Fuglesang and Curbeam replaced a failed camera meant to support assembly tasks and removed locks that had held the P-5 Truss in place during launch. Then, they got a start on preparations to move the P-6 truss segment from its current position on the Z-1 Truss to its final position at the open end of the P-5 truss. They removed a cover and an RMS grapple fixture, and then returned to Quest after an EVA duration of 6 hours and 36 minutes. 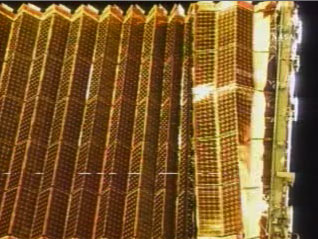 December 13 began with an attempt to retract the port Solar Array Wing on the P-6 Truss. The attempts didn’t go smoothly and repeated attempts failed with only 17 of the 31 panels retracting. The guidewires were becoming snagged. It finally improved enough for retraction to continue for three minutes. Terry Virts flippantly quoted Charles Duke, the astronaut who had acted as Capcom for the Apollo 11 landing phase: “You’ve got a bunch of guys about to turn blue here.”

Controllers finally decided that the SAW was retracted enough to continue the day’s work. The Solar Array Wings on P-4 began to rotate to their operational position. Ammonia was allowed to flow into the truss structure and its radiators, checking off another item on the list towards providing permanent cooling for the avionics and electronics on the International Space Station. While Houston discussed options for completing the retraction of the P-6 SAW, the crews continued transferring equipment between Discovery’s SpaceHab and the space station. 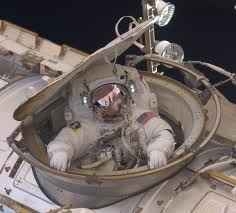 On December 14, ground controllers powered down many of the International Space Station’s systems in preparation of the second EVA. During this EVA, Discovery would be responsible for controlling the space station’s orientation by firing its thrusters as needed. Curbeam and Fuglesang began their second EVA a half hour early and rerouted cable connectors to switch power circuits from the P-6 SAW to the P-4 SAW. Ground controllers routed power through Channels 2 and 3 for the first time.

Curbeam and Fuglesang also relocated CETA handcarts on the rails of the main truss, installed a thermal cover on Canadarm2 and installed bags of tools for use by future EVA crewmen. The EVA ended after a duration of about five hours.

Most of December 15 was devoted to transferring equipment between Discovery and the International Space Station, press conferences, and continued efforts to retract the P-6 SAW. On December 16, Robert Curbeam and Sunita Williams began the third EVA of the STS-116 mission. They began by rerouting electrical connectors along the truss. With this done, controllers applied power to Channels 1 and 4. Now the only changes to the electrical configuration would be new connections added whenever the Shuttle brought up new truss segments.

Moving on, Curbeam and Williams attached a grapple fixture to Canadarm2 and positioned bundles of radiation shielding on the Russian part of the station to be placed on their final location on a future EVA.

The two spacewalkers moved on to the P-6 SAW in the hopes of solving the problem of apparently misaligned guide wires. During a visual inspection, Curbeam reported, “It’s definitely hanging up.” The two astronauts took turns shaking the array in an effort to clear the “grommet” rings that were causing the hangup. In the end, they were able to free enough rings to retract it by about 6.5 more panels, bringing the SAW to about 35% retracted. Finally, controllers decided to save the final effort to retract the SAW for another day and the two EVA astronauts ended their EVA after a duration of 7 hours and 31 minutes. 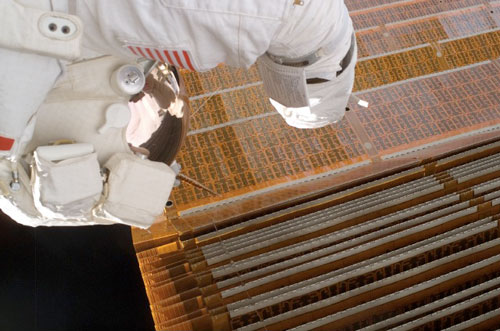 Curbeam does some work on the P6 solar array. Image credit Collect Space

The fourth EVA had been added to the schedule after the difficulty with the P-6 SAW developed. Curbeam and Fulglesang began their EVA on December 18 and made their way to the P-6 Truss segment with Curbeam riding Canadarm2 and Fuglesang making his way hand over hand. Curbeam worked with the stuck guidewires and hinges to insure that they were folded correctly. Fuglesang pushed on the box that the SAW was being retracted into in an effort to encourage retraction. Controllers sent up commands to retract the SAW a little bit at a time and it was finally retracted. The EVA astronauts ended their spacewalk with a duration of 6 hours 38 minutes. Curbeam was the first astronaut to make four EVAs in a single spaceflight.

Meanwhile, duties like the transfer of equipment between Discovery and the Space Station were completed. During the farewell ceremony, Shuttle Commander Mark Polansky said, “It’s always a goal to leave a place in better shape than it was when you came. I think we have accomplished that.”

Suni Williams told Thomas Reiter, “I hope Discovery takes you home as smoothly and safely as it brought me here.” 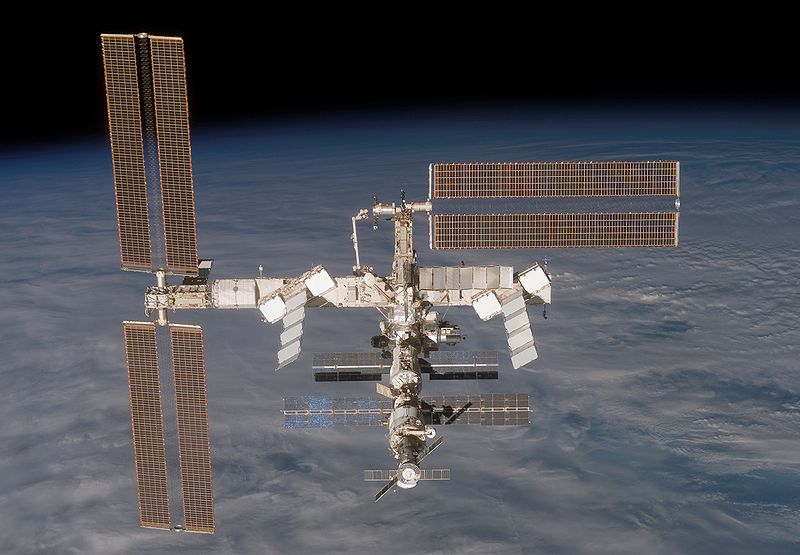 The International Space Station is photographed by the departing Discovery. Image credit Wikimedia