Did you serve time in the military? If so, I bet it wasn’t exactly fun, especially if you got deployed somewhere. You’re living on lousy rations, you know you could be facing the enemy at any time, you hear all kind of stories about retired veterans being treated lamely by the Veterans Affairs office, and what’s going on with a shooting at Fort Hood AGAIN?! This is the sort of thing that is going to give people second thoughts about serving our country.

Don’t get me wrong, military experience can be a good thing. The Army has been curing immature twenty-somethings of their undisciplined habits for centuries. You’re out there toting a gun and you’re scared and you wish you had listened to your parents when they told you to apply for scholarships. You learn skills that can transfer over to the civilian work force if you know how to translate what you picked up into a resume that can be understood by most employers. (And, to all employers out there, veterans are very employable if you don’t mind setting up a booth at the local veterans’ job fairs.) In fact, I can’t necessarily say that mandating a couple of years’ worth of military service the way Israel does is really a bad thing when you consider that they’re a little country with enemies on all sides and their crime rate is lower than you see in the U.S. Apparently, you see fewer people getting killed by gun violence because they have armed guards at the entrances to all the schools and because most people know how to use guns safely (Yes, Israelis can get a license to own a gun) besides the fact that they probably had all the immature behavior knocked out of them during their military service. Heads up, America – all those stories you see about some psycho getting into schools and killing children has only happened twice in Israel in the past forty years because there are people in uniform with guns who can stop them and Israel is tough on crime.

Is mandatory military service for everybody? Probably not. In America, we don’t really need it and the draft has been unpopular since Vietnam anyway. If we need more people in the armed forces, we just ramp up recruiting and expand the budget to suit. The downside is that people in the 18-to-25 bracket with no military service have an unfortunate tendency to hold on to their undisciplined immature years longer and they can still get themselves killed for no more reason than that they were dared to do something. The upside is that people have more choices about which branch of the military they go into when they voluntarily sign up for the armed forces than they would have if they were drafted.

And why did so many people get killed in every American war since World War II? Blame the politicians if you want. A lot of the people who write the rules of combat have no connection with the realities of the battlefield. In Vietnam, our combat personnel had to put up with rules that you couldn’t go after an enemy fighter plane if it crossed the Chinese border and it was almost impossible to disrupt enemy supply lines because people in Washington sat around drinking tea and worrying about what would happen if we provoked the Chinese and the Russians. This was during the Cold War era when everybody was freaking out about potential nuclear war, so in some ways it was understandable that we didn’t want to upset the Soviets too much. Containment policies don’t help much when you’re shackling your own men and you aren’t in those little countries to just win this police action and go home. Nobody wants to be drafted when you know you’re going to be stuck in a hellhole for years because the Politically Correct movement doesn’t want to get tough with the enemy.

That’s why you start seeing all those cases of PTSD. It’s not just people whining about what they went through in places like Afghanistan. Their minds get stuck in the “fight or flight” response to danger. Fourth of July fireworks can trigger a flashback to that time they had missiles going off all around them. Some veterans come back nearly unrecognisable to their own families. If you draft a scared kid who is barely out of high school, give him a gun and send him off to kill somebody who is trying to kill him, there should be some way to hold you responsible for picking up the pieces when it’s over.

I probably shouldn’t get into whether Mars is going to have a military, but it would kind of make sense considering it’s named for the Roman god of war. Inevitably, Earth is going to have to respect the fact that it’s tough to enforce laws from an average distance of 225 million kilometers. At first, we’ll probably be thumbing our nose and saying, “If you want us, come and get us.” If somebody decides to get macho and try to enforce their way with us, well, by then we’ll probably have worked up enough expertise with surviving on Mars to basically do what the original American colonies did. We know the landscape and we’ve built up enough technical know-how to have fun with your space hardware. We’ll take over your spacecraft’s computer while it’s still in orbit and laugh at you as we listen in on you explaining to your version of Mission Control how you ended up landing in the wrong place. There might not be need for a war and all the unpleasantness that goes with it at all. You respect our independence and we’ll respect the fact that you finally made it to Mars. Here’s my reaction when somebody suggested that somebody outside Mars One might want to join our colony (from the Aspiring Martians Forum): 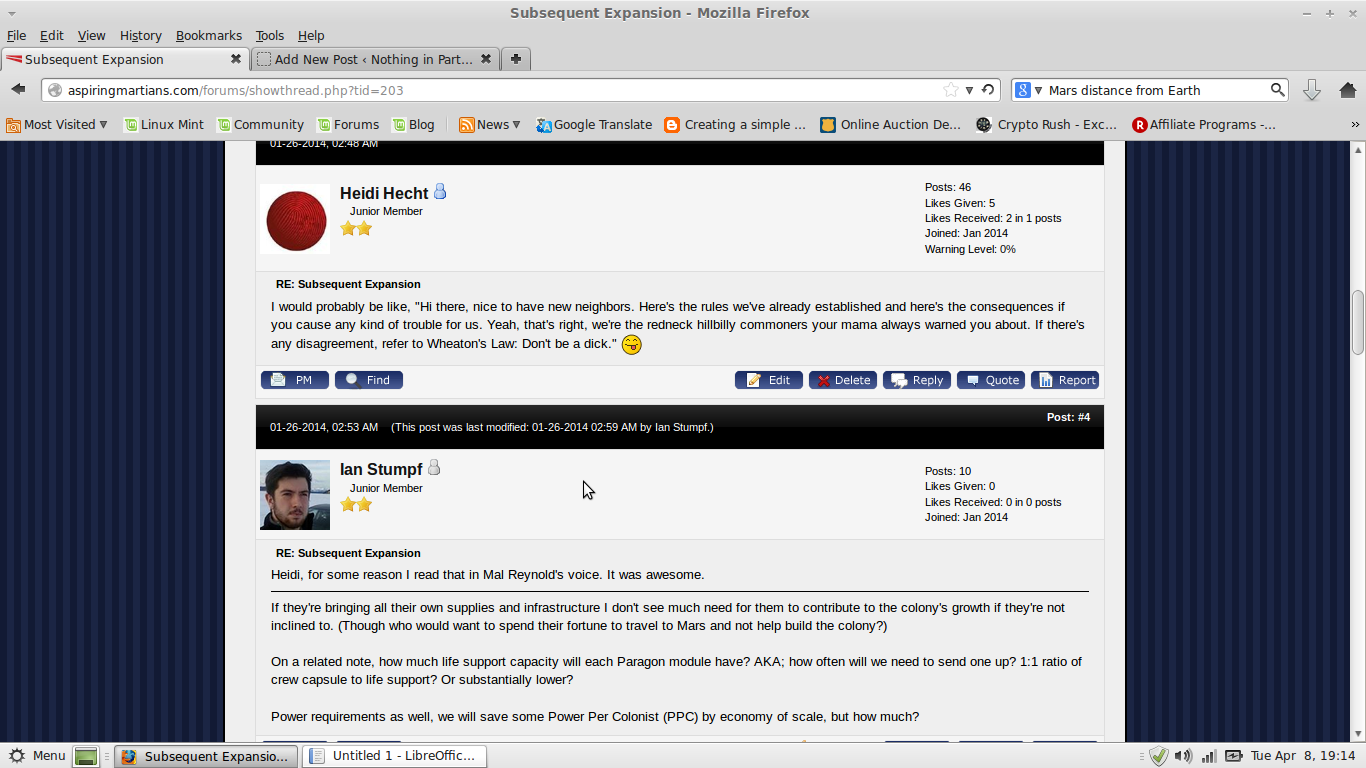 You may notice that the person who commented below me thought I sounded like somebody out of “Firefly.” While I don’t follow that show, I can see where he was coming from. I’m not a big fan of starting a fight, but I’m no pacifist, either. If somebody tries to pick a fight and actually manages to corner me, I have a mean right hook. And I’m no fan of the idea of involuntary military service, either. I simply believe that people have the right to join their nation’s armed forces and it’s great for teaching discipline, but they shouldn’t necessarily be made to do it.