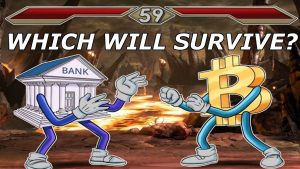 How much do you hate your bank? Anyone who has ever had a checking account or taken out a loan knows the feeling. Somebody at the bank miscalculated something and then tried to blame you for it. You just got socked with an overdraft fee. You might have heard good things about credit unions and decided to check a few out.

There are some indicators that doing banking the same old way may be on the way out. Peer-to-peer lending sites like BTCJam, which works mostly with Bitcoin but gives you the option to convert to your preferred fiat currency through CoinDesk, are gaining traction. If you need extra cash to cover expenses or expand a business, you can get a loan without having to put up with the high interest rates of credit cards or the banks’ drawn-out approval process. If you have money to invest, you can decide exactly how much risk you’re willing to take on instead of trusting your bank to do it for you. We saw in 2008 how well that worked.

Considering that Bitcoin was released only a few months after the financial crash that came to be known as the Great Recession, I’m surprised that there aren’t conspiracy theories that Satoshi Nakamoto was a banking insider who saw it coming. It would seem to address some of the problems that led to the crash. Cryptocurrencies can be used to move money from anywhere to anywhere without international financial institutions even knowing it’s being moved. The Blockchain can be used to encourage greater transparency and accountability in record-keeping systems along with being very difficult to tamper with. Overdraft fees could theoretically be a thing of the past when you can’t spend money you don’t have in your wallet – which, BTW, is very easy to download on a cheap Android tablet with no photo ID card required. When you use Bitcoin, no banker is going to take unwarranted risks with your money. Blockchain applications like Bitcoin are called “trustless” systems because you don’t have to trust a third party to hold your assets or handle the record-keeping.

Many experts have called the Blockchain the really interesting part of Bitcoin. It’s a ledger and a fairly dumb one for all that the smart contract is one of the first post-Bitcoin applications to come out of it. Fundamentally, it doesn’t know if you’re dealing in cryptocurrencies or securities as long as it can create new records called “blocks”. Developers build their applications around it to suit their needs and might even be able to create applications for banks in which important financial decisions are being made in satellite offices. Could repeated financial meltdowns be avoided if a Blockchain application made it impossible to hide exactly who is making too many risky loans? Can decentralized Blockchain applications that can be customized for specific uses make it so that nobody is truly “too big to fail?” This kind of activity could end up being a little like watching the Infamous Bitcoin Fork of 2013: Will centralized banks with their control over ordinary people’s money or decentralized financial systems in which anyone, anywhere in the world can do business directly with one another win out in the end?

Some financial institutions like the Bank of England have unbent enough to admit that cryptocurrencies could be useful, but this isn’t always the case. Even when the big banks and their politician friends don’t like it very much, they still have to live with the fact that 40% of the human population is unbanked and that’s going to be where Blockchain applications are going to find their attack vector when they’re ready to become serious contenders. The mobile minute exchange system MPesa has already found enormous success in Kenya and Bitcoin is poised to take its place beside this system among people who would have to walk miles to the nearest bank. Imagine being able to do business with someone halfway around the world even if PayPal doesn’t work in your country and there’s no Western Union in town. You don’t have to wait days for the remittance to come through and the financial institutions involved aren’t taking 3% of your money. You can even sign a contract knowing that your assets will return to you if the other party flakes on the deal or create a notarized document with fewer worries that document might be disputed later. There are no real losers in this scenario when the inclusion of the unbanked creates a feedback loop described in the words of my favorite fictional capitalist, Deep Space Nine‘s Quark: “Earning money – and spending money!” The 40% of the population that banks pretty much ignored become relevant to worldwide economic systems when an alternative that helps them participate as people who can bring something of value to the table becomes available.

You don’t need to hate your bank. Really. They’ve got costs to cover and, like most businesses, they’re in it to make a profit. However, like most businesses, they shouldn’t be surprised if they get a little competition or consumers decide to switch to an alternative that just works better for them. The existence of Blockchain applications will force banks to rethink how they do business and customized applications might work their way into the banking industry whenever it’s forced to rethink the way it does business. Beyond that, centralized financial institutions will still have a decent market share with people who like to keep things simple and let other people handle the money. Blockchain applications can handle the rest.