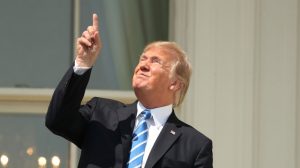 Trump demonstrates what not to do during a solar eclipse. Image credit Mother Jones

So I’m one of the millions of people who traveled to the path of totality to see the Great American Solar Eclipse on August 21, 2017. My dad and I basically sacked out in a Wendy’s parking lot in Anderson, South Carolina, because we couldn’t find the spot where we were originally going to watch the eclipse. It was awesome, it was cool, and I wish it was possible to take better pictures of a solar eclipse with an iPhone without frying the camera. Maybe it didn’t imperially change my life – I am, after all, still a blogger and content writer who likes to hang out with my cat – but this definitely falls into the “10/10, would do again” category.

The highlights for me were answering questions shouted at me by people going through the Wendy’s drive-through and chatting with someone who was unprepared for the event. He asked a fairly basic question about how solar eclipses even work. Life Pro Tip for that kind of situation: Don’t act like they’re idiots if they have a basic question about astronomy and should have known it was coming because it was all over the news – or, at least, it was when the mainstream media wasn’t talking about the latest crazy thing that Trump said. Just answer the question and give them an extra pair of solar eclipse glasses so they won’t fry their eyes.

I’ve seen a few people try to politicize the eclipse on Facebook and, if anything, others did the right thing by generally ignoring them if not outright banning them from Facebook groups where the admins will shut down on political discussions. These people were being somewhat unfair to eclipse watchers because most of us are already aware that the world is a messed up place. We just don’t think that the latest nutso thing that Trump said should be thrown in our faces 24/7, so a lot of us just turned on some live coverage of the solar eclipse on our radios while watching the event.

It’s probably just as well that Trump didn’t try to have that rally at any point along the path of totality because you can be sure that protesters would have ruined the event for everybody else who just wanted to enjoy the eclipse. Maybe that mayor in Arizona did us all a favor by asking Trump not to come. I think we all know by now that Trump doesn’t like being told what not to do. So his stubbornness had the fringe benefit of drawing the attention of hardcore activists who look for any opportunity to make a scene away from the path of totality. That way, activists could spend their time and energy protesting a Trump rally while leaving the rest of us alone to enjoy the first eclipse with a path of totality that ran across the entire continent in 99 years.

Yes, we all know how much you hate Trump and everything he stands for and you’d rather see him impeached. I’m not a huge fan of him either. I just know that sometimes people like to take a mental time-out from all the screaming about politics and this solar eclipse was a chance to do exactly that. So thanks for not ruining it for us.

The most important thing is that people could take a moment out of their busy lives to enjoy the eclipse and forget about all the crazy stuff that goes on in the world. NBC actually didn’t need to make such a fuss about the eclipse possibly costing businesses $694 million in lost productivity because, while I haven’t yet seen the numbers, the sheer number of people who were traveling for the event would have more than made up for that. Some businesses didn’t even seem to expect their employees to miss the event. The employees at the Wendy’s I was parked at used the excuse of taking the trash out to the dumpster to take a peek at the moment that the total eclipse happened. If your boss made a fuss about you taking your afternoon break to pretty much do the same thing, you seriously need to consider getting another job because seeing the eclipse is so totally worth it.

So yeah, I’m looking forward to 2024, when I can do it all over again and maybe snag some better solar photography gear beforehand. Call me an eclipse chaser if you like. Just don’t expect me to wave a sign and chant political slogans while chasing eclipses.