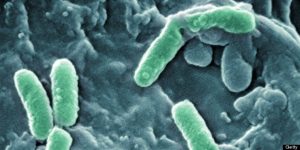 Microbes such as the Pseudomonas aeruginosa bacteria shown here have demonstrated an ability to survive, if sometimes act differently, in the space environment. Image Credit: HuffPost

HOUSTON, June 27 – In Professor George Fox’s lab at the University of Houston, scientists are studying Earth germs that could be contaminating other planets. Despite extreme decontamination efforts, bacterial spores from Earth still manage to find their way into outer space aboard spacecraft. Fox and his team are examining how and why some spores elude decontamination. Their research is published in “BMC Microbiology.”

To gain access into the uber-sanitized clean rooms at NASA’s Goddard Space Flight Center in Greenbelt, Maryland, the world’s largest clean room, or the Jet Propulsion Laboratory in Caltech, California, employees pass through a series of lobbies. One, with adhesive floor mats, traps dirt carried on shoes. Another, about the size of an old phone booth, delivers a forced-air shower where dozens of air jets blow away dirt and debris. Only after these sterilization measures can they don the bodysuits, head covers and other disinfected regalia.

And still, bacteria survive and have been carried onboard the International Space Station and found on the Mars Rover. The ability of bacteria to survive extreme conditions could potentially lead to a process called ‘forward contamination.’

“The search for life elsewhere is impacted by the possible transport of organisms from Earth to solar system bodies of interest,” said Fox, Moores Professor of Biology and Biochemistry and Chemical and Biomolecular Engineering at UH. Fox is no stranger to microbiology. In the 1970’s, along with fellow scientist Carl Woese, he revolutionized the field by discovering that archaea are a separate domain of life.

As with natural selection, the cleaning process inside clean rooms will eventually kill off the weaker bacteria while a stronger strain adapts and is unphased by the cleansers.

“No matter what we do, some bacterial spores appear to be finding ways to escape decontamination,” said Madhan Tirumalai, a post-doctoral biologist in Fox’s lab. “I’m trying to understand what makes these spores so special at their genomic level and relate these features with their ability to evade decontamination measures.”

It starts with sequencing

The Fox team studied non-pathogenic (non-disease-causing) bacteria that belong to the genus Bacillus and produce highly resistant spores. They were isolated from cleanrooms and spacecraft assembly facilities at the Jet Propulsion Laboratory.

They sequenced the complete genome of two strains resistant to peroxide and radiation:  B. safensis FO-36bT and B.  pumilus SAFR-032. Then they compared the genomes of those strains and that of another strain, B. safensis JPL-MERTA-8-2, with bacteria known to produce spores that are vulnerable to peroxide and radiation, such as the strain B. pumilus ATCC7061T. The B. safensis JPL-MERTA-8-2 strain was isolated from the Mars Odyssey Spacecraft and associated facilities at the Jet Propulsion Laboratory and later also found on the Mars Explorer Rover (MER) before its launch in 2004.

“The genome blueprint gave us the basic clues of what the organism might be harboring,” said Tirumalai.  By comparing the blueprints of the four strains, they found 10 genes that are unique to the FO-36b, that are not found in any other organisms (including other Bacillus strains). That is 10 genes whose functions are unknown – or 10 suspects for why spores of B. safensis FO-36bT are resistant to peroxide and radiation, although it is not immediately obvious that the presence or absence of any specific gene or combination of genes is responsible for the variations in resistance seen.

“It is quite possible that distinctions in gene regulation can alter the expression levels of key proteins thereby changing the organism’s resistance properties without gain or loss of a particular gene. These are potential genes of interest with respect to the resistance of the spores of this strain” said Tirumalai.

As it turns out, four of these genes are found on phage elements of the bacterial strain. Phage, short for bacteriophage, is a virus that infects bacteria. Phages are major facilitators for transferring genes between microbes.

“The task to eliminate microbes in clean rooms, where spacecraft are assembled, or aboard spacecraft, will continue to be a challenge for NASA and other space agencies,” said Tirumalai.

About the University of Houston

The University of Houston is a Carnegie-designated Tier One public research university recognized with a Phi Beta Kappa chapter for excellence in undergraduate education. UH serves the globally competitive Houston and Gulf Coast Region by providing world-class faculty, experiential learning and strategic industry partnerships. Located in the nation’s fourth-largest city and one of the most ethnically and culturally diverse regions in the country, UH is a federally designated Hispanic- and Asian-American-Serving institution with enrollment of more than 45,000 students.