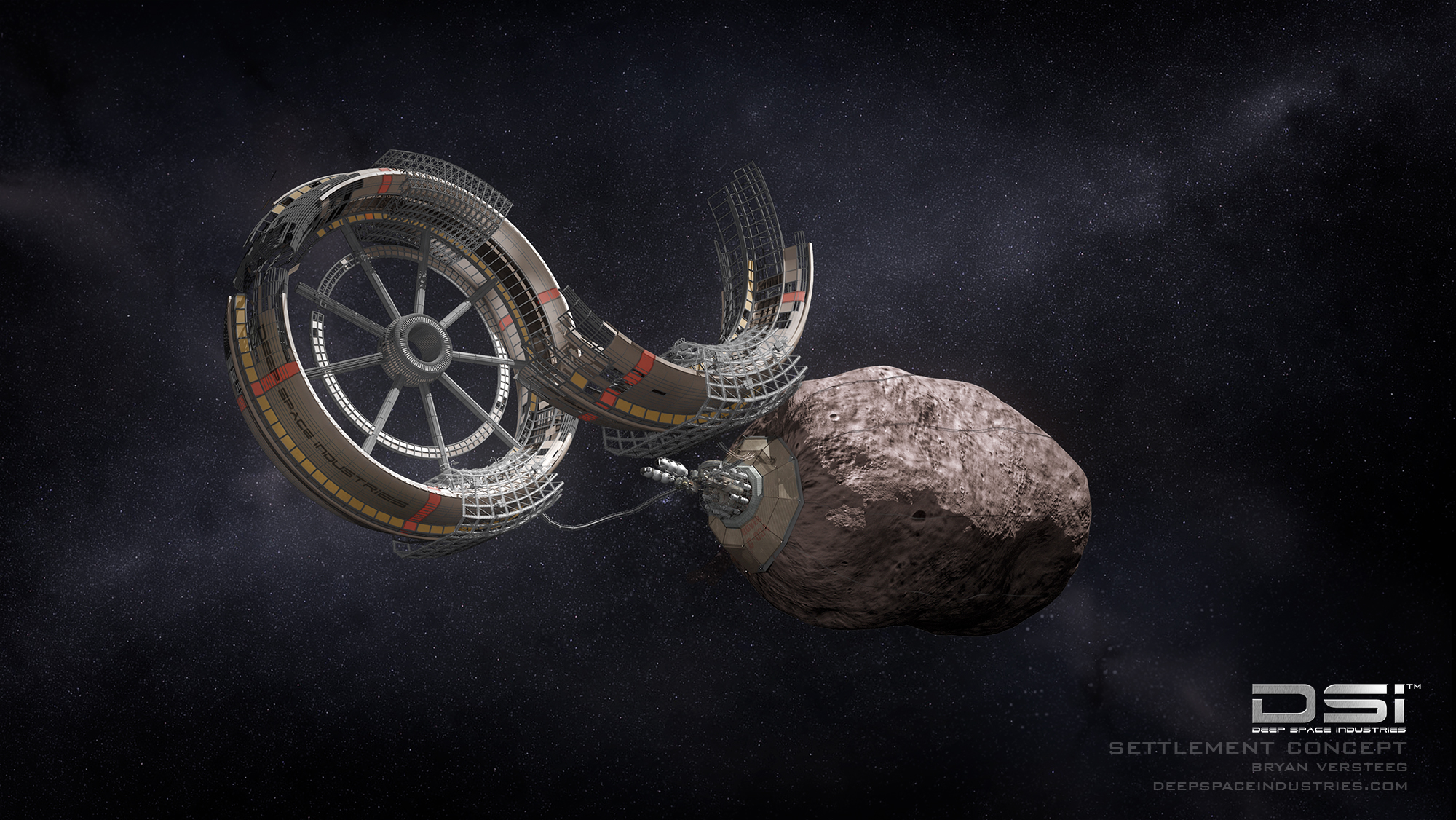 Construction of a large revolving space station, as proposed by Deep Space Industries.

What’s it worth to stop large asteroids that are going to pass close to Earth and possibly hit it hard enough to cause the next mass extinction event? I mean, beyond the fact that this is currently the only planet with Homo sapiens living on it. This apparently is not a hot enough issue to catch the attention of world leaders and I seriously have to give credit to the Sentinel Mission for its goal of launching an asteroid-hunting telescope into solar orbit on the theory that you can’t stop something that you can’t see.

If saving Earth from the next mass-extinction-causing asteroid isn’t incentive enough, one should consider the idea that Asteroid 2012 DA2014 passed within 27,700 kilometers of Earth in 2013 and is estimated to contain resources worth a total of $195 billion dollars. The metallic content of 15 asteroids the size of DA2014 would have been equal in value to the annual metals and mining industry right here on Earth. That’s resources that could have been injected into the Terran economy if we could have harnessed and harvested it. Wasted opportunity? Sure it was. It was a good reminder of the economic value that serious space industries could have if we’d just get out of our own way.

There are actually individuals and organizations that want to solve this problem. Deep Space Industries is one. By harvesting and making use of resources found on near-Earth asteroids, Deep Space Industries (DSI) and its main current competitor, Planetary Resources, Inc., aim to kick the space economy into high gear.

The challenges aren’t just technological. The legal issues basically boil down to questions of who owns what. The 1967 Outer Space Treaty forbids its signatories to stake claims but allows private enterprises to operate in outer space. However, organizations that are interested in “space mining” would very much like to see greater clarification of what happens to resources extracted in space when they reach Earth’s surface.

At their best, legal property rights are attempts to impose civilized attitudes towards exactly who has the right to exploit any given resource. When created and enforced on a completely fair basis, property rights can protect the interests of vulnerable landowners in the face of organizations with more power and more resources. If you are inclined toward a more cynical attitude – and, indeed, if you look at a lot of world history – you could say that the entities that are most capable of taking and holding resources are the owners. I’ve heard tales of powerful mining corporations bullying communities that are sitting on top of valuable land that the corporations wish to exploit, and very often the corporation wins because it can afford to pay off corrupt officials and thinks nothing of bulldozing the landowners’ homes and livelihoods out from under them. Here’s one example:

Considering the circumstances, I would not be very happy if space miners flooded the market with valuable metals brought in from the asteroid belt. At least they would not be pushing out local farmers. However, attorneys could still make trouble by tying up the court system and running up the legal bills of organizations like DSI with lawsuits aimed at shutting them down. In that type of scenario, nobody really wins except the attorneys because it diverts money that is needed for innovation. It’s a case where DSI would be well-advised to choose the friendliest possible place to operate from on a legal basis, where corrupt judges are very much the exception rather than the rule and the loser of a lawsuit has to pay the legal fees of the winner.

Whenever new concepts shake up the system, the old established concepts usually don’t give up without a fight even when they’re wrong. The idea that Earth revolves around the sun is older than Copernicus but didn’t last long the first time around because more influential minds prevailed. Completely Earth-bound mining corporations are not going to like the idea of competing with miners that can easily bring in billions of dollars’ worth of resources in a single run and may try to make life miserable for the new kid on the block. This is about where free-market economics usually comes in handy. Who’s going to want those billion-dollar shipments of platinum-group and rare-Earth elements badly enough to tell corporations that are stuck in the past and their attorneys to go stuff themselves?

Until that happens, it may actually be beneficial in the long-term if the supporters of heavy-duty space work quietly focus on building infrastructure using raw resources from asteroids that include water ice, carbon, magnesium, silicon, nickel, iron and calcium – to name a few of the resources found in asteroids that are interesting from the standpoint of industry and long-duration space missions – while they wait for either these legal precedents or friendly trade agreements with future colonial governments, whichever comes first. By that point, property ownership rights in space could boil down to, “I won’t interfere with your operation if you don’t mess with mine,” combined with a relatively fair and peaceful way to settle disputes when somebody inevitably steps on somebody else’s toes.