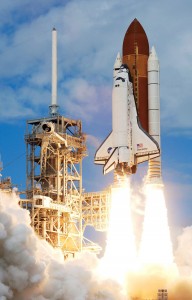 Discovery launches for the STS-120 mission. Ethics was probably the last thing on the crew’s minds. Image credit Wikipedia

Y’know, I respect astronauts. They’re the people who have seen the footage of what happened to the space shuttles Challenger and Columbia and can sit on top of a rocket full of combustible fuel anyway. Some of them have called launch a “controlled explosion” because of what happens several stories below them. They can laugh at the cowardly astronaut character because, on some level, they’re probably also laughing at the butterflies they get before launch. However, none of them have ever aborted a launch simply because they chickened at the last second.

One thing I’ve never heard them complain about is the ethics of sending meatbags that have been optimized for life on Earth into a microgravity environment. They knew they were going to be lab rats from the moment they were chosen for their astronaut class – not exactly a fun experience, but not a deal-breaker. They know they could die in any number of unpleasant ways if critical hardware fails. They voluntarily signed up for this and they could quit at any time if the whole thing gets to be too much for them – though, naturally, you’d be considered a total heel if you quit while you’re assigned to a crew or actually serving an increment on the International Space Station. If they were going to be all Jose Jimenez about it, they probably would have never signed up for this in the first place.

When you can inspire songs, you’re doing something right.

Where does ethics count when it comes to space travel? Ideally, no one would ever be forced to go into space, not even for a brief jaunt. Anyone who signs up for anything from a Virgin Galactic suborbital hop to permanent residency in a future space settlement should do so completely voluntarily with eyes wide open about the risks and benefits. On the flip side, no artificial obstacles should ever be placed in people’s way if they are willing to do what it takes to hitch a rocket ride to anywhere but Earth. 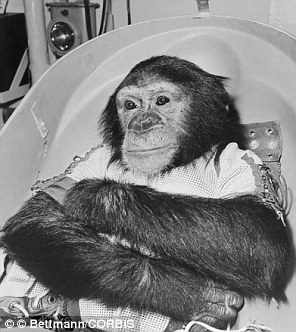 Ham, one of the American “Space Chimps,” had a reputation for being a pissed-off little primate. But at least he had a good reason for it. Image credit Daily Mail

If the ethics of space travel comes up in the conversation, I might be the one asking the tough questions from the standpoint of someone who supports space efforts. Is it ethical to deny space enthusiasts the chance to colonize Mars or establish a really big floating space colony if that’s what they genuinely want to do? In this case, one must always remember the fine line between objecting on ethical grounds and projecting your fears onto everybody else. The Mercury astronauts who complained about the chimps that preceded them weren’t wrong from an ethical standpoint because at least human astronauts could choose to take the risk. Those poor chimps never had the option of “opting out” of the project. And now there’s talk that Russia is working on sending some manaques, a type of monkey, to Mars. Which would you prefer to send to Mars first, monkeys who don’t understand the risk and can’t opt out, or humans who are capable of making an informed decision, know the risk, and decide to go to Mars anyhow? When discussing any project that involves risk, it’s not only the chance to opt out that matters. The chance to opt in for risks that individuals believe are worth taking is equally important when discussing the ethics of the situation. Anything less than letting humans make their own decisions about how much risk they are willing to take on, even if it means we have instances of space colonists dying in unpleasant ways, should be considered not only a serious violation of ethics, but also a violation of personal liberties in cases where they don’t need a lot of negative Nancies hanging around to understand the risks involved.

Is mining the asteroids for valuable rare-Earth elements any less ethical than mining activities on Earth that use methods that leave a big gaping hole in the ground, harm the environment with toxic chemicals, and sometimes even displace communities that had the misfortune to live above valuable raw resources? Many powerful mining companies have been known to engage in intimidation tactics if landowners in a region where they want to establish a mine stand up for their rights and ignore environmental regulations in their quest for greater productivity when extracting valuable resources. Bringing home resources from the asteroid belt might not solve the problem overnight, but the fact that any decent-sized asteroid could contain as much as $1 trillion in rare-Earth resources makes space mining a little hard to ignore as a possible competitor for Earth-based mining and its harmful environmental practices.

What are we going to do with the millions of workers in industries that are stepping up efforts to automate their positions without trying to slot them into meaningless make-work jobs? The talk of automating jobs that require only the ability to perform repetitive tasks calls to mind the same recognizable pattern that farm workers must have went through when many of the jobs that used to be done through manpower and horsepower started transitioning to heavy farm machinery. They had time to retrain for other job opportunities because it didn’t happen all at once. When discussing “jobs programs,” it’s easy to ignore the future opportunities that having a comprehensive space program can bring. Any time the topic of eliminating poverty comes up, it should never be made out to be a choice between reducing poverty and expanding into space when every engineer and technician who works for NASA or one of its many contractors is one who isn’t collecting a welfare check. These are the ones who likely feel the greatest frustration when a program gets cancelled due to lack of funding. Is it ethical to tell them that their means of making a living in a way that also allows them to keep their dignity is invalid because there are people living on the streets? And is it ethical to shut down possible future opportunities that the impoverished might benefit from simply because they happen to be down on their luck now but could get a boost through the chance to help work on and possibly join a space colony if they are willing to go through this training program first?

Mars ain’t the kind of place to raise your kids. Or is it? Maybe, if you can get used to the idea that it’s a frontier world where if you make one wrong move (or run afoul of the Sisterhoods), you might gain the honor of being displayed as a frozen statue in the cemetery.

Anyway, the most clever space colonists are going to keep their eyes peeled for any opportunity they run across. On a frontier world like Mars, a sorta-smart luckhead could make a fair amount of quid just by taking a closer look at an interesting boulder and whacking off a chunk. Think of it as the Martian Gold Rush if you like. The Forty-Niners were mostly people who might have been considered uneducated rednecks and could have even run afoul of the law a few times back home, but they’re willing to take all the risks and camp out at a promising site where there might be precious metals in the hope of striking it rich. It wasn’t even just the gold panners. Where the gold panners and other frontier types went, medics, blacksmiths and other skilled tradesmen usually followed once there was a decent market for their services. Basically, they were employed by the gold panners who might have appreciated having someone around who could tend the injuries and illnesses that came with life in an untamed land. I would not be very surprised if some of the camp cooks found the occasional gold nugget on their own. How ethical would it be to deny people like them the opportunity to, as Robert Zubrin put it in How To Live On Mars, “get rich while running errands for the boss?” Even when they don’t find much more than a smattering of gold flakes, it beats putting up with all the high society types who look down their noses at people like them simply because they can’t find a steady job back home.

And possibly the most important question: What would you be willing to do to support human expansion into space even if you’re unwilling to ride that rocket? You might be really good at organizing events and fundraising, or blogging and creating new videos to put on your Youtube channel, or working a complex engineering problem under pressure. A century from now, you might be remembered as the next Chris Kraft, Wernher von Braun or James Webb if you work yourself into a good position to support our future Buck Rogers types now. If you want to discuss ethics at all, you might consider the ethics of making sure that Buck Rogers has the best possible chance of survival if he is really, truly determined to go.

The important thing here is that you should never underestimate how far people are willing to go to get what they want. Even when other people raise moral and ethical objections and find ways to slow them down, a truly determined individual or group of individuals will find a way to make it happen. Elon Musk’s idea of landing a rocket on a barge and then relaunching it may not have been created out of whole cloth. There have been actual attempts to launch rockets from the sea, including a failed attempt to launch a V-2 rocket from the aircraft carrier U.S.S. Midway in 1947. Any successful attempt to use a barge like the ones belonging to SpaceX to land or launch rockets would be promising for anyone who worries about the legalities of private space efforts and may be tempted to make use of a launch platform in international waters despite the added trouble and expense. From an ethical standpoint, it’s better to remove as many artificial obstacles as possible for people who genuinely want to go into space – even allowing that it’s expensive and it’s risky and some people might chicken at the last minute or make the one boneheaded move that turns them into a frozen human statue – than to make it more expensive and risky for them by completely forbidding it just because some people are dithering about the ethics.

Some Good Books to Read