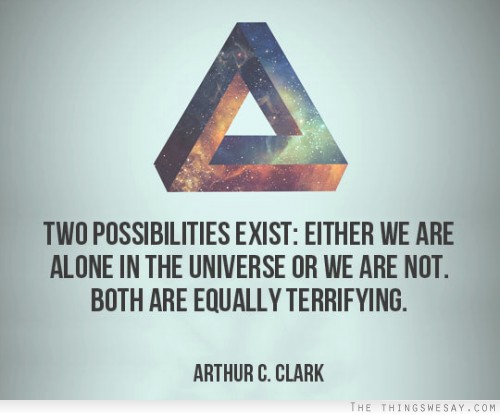 Image Credit: The Things We Say

There was a time when people thought Earth was the center of the known universe. Then Earth got pushed out of the center by the Sun. Now we know that the Sun is not even the center of our galaxy and, in fact, is a fairly average G-class star. The interesting part is that we still measure distances by saying that Alpha Centauri is 4.37 light-years from Earth and Antares is 600 light-years away from Earth. That doesn’t tell me how far Alpha Centauri is from Antares, something that interstellar navigators will probably need to know at some point. We still act like Earth is something special in the universe when it may well be that the only thing that’s “special” about our little mudball is that it’s the only planet that currently has the species known as Homo sapiens on it.

Are we alone in the universe? Some people genuinely hope so. They say that, if intelligent alien life actually existed, surely we would have detected their radio signals by now. These people are assuming that either intelligent extraterrestrials are fairly close to us, or they have had the power to transmit powerful radio signals for a lot longer than we have. We simply aren’t picking up very many “Wow!” signals like the one that Jerry R. Ehman picked up in 1977. However, that is not proof that no alien life exists. Potential alien civilizations may be so far away that any signal they transmit could well be drowned out by the cosmic background noise that may be an echo of the Big Bang.

Stephen Hawking on “The Wow! Signal”

E.T. may be staying home because he might not see why he should bother with an insignificant bunch of talking monkeys on an insignificant mudball. He may also have tried to leave a message on our interplanetary answering machine and we never called him back. E.T.’s friends may have already visited the planet as carefully disguised tourists or adolescent pranksters. If a real-life equivalent of Men In Black actually exists, they may have their hands full or they may all be sitting around making up tall tales that get turned into science fiction movies out of pure boredom.

There is also a pesky little thing called the Fermi Paradox. Essentially, an Italian physicist named Enrico Fermi had one of those lunchtime discussions in which he told friends that a spacefaring civilization could theoretically colonize every habitable planet in the Milky Way within ten million years if that civilization is extremely motivated, very patient and doesn’t destroy itself first. Avid fans of science fiction might recognize the overdone cliché that an advanced alien race deposited some form of life into a primordial Earth just to see what would happen. Some people even claim that contact with interplanetary if not interstellar civilizations would explain certain elements of our mythology although I would like to see real proof like an abandoned alien outpost before I make any judgment calls on that one. So why isn’t there a Galactic Empire?

The most likely reason is that most species don’t last ten million years, let alone most civilizations. Rome rose and fell in a couple of millennia. It’s estimated that Homo sapiens existed as a distinct species for 100,000 years. If an extraterrestrial species were to spread across the galaxy over the course of ten million years, it would probably branch off into several species in the process even without the benefits of bioengineering. A one-planet species might not last beyond the next mass extinction, but have you seen those pictures of what we could look like in 100,000 years? We might still be recognizably human, but we’ll have changed to adapt to whichever environments we find ourself in as we expand into space. A Galactic Empire could have ripped itself apart simply because the residents of each planet didn’t have much in common with all the other member planets anymore.

Cue all the crazy half-baked hypotheses, right? Well, I’ll leave those up to the conspiracy theorists and the science fiction writers who don’t mind putting a new spin on an old cliché. Extraterrestrial civilizations may have some very valid reasons beyond the Fermi Paradox for not contacting us. A theory called “The Great Filter” is one. Basically, this theory states that most civilizations are capable of going one of two ways at one certain point in their history. Either they could become an interstellar civilization, or they could destroy themselves. This is the case we’re seeing right here on Earth, where we possess both the basic technology needed for space travel and the means to destroy ourselves in the form of enough Weapons of Mass Destruction to cause another mass extinction. According to the Great Filter, most civilizations will destroy themselves and that’s why the cosmos appears to be so empty of intelligent life.

Another theory is that carbon-based life, AKA life as we know it, is not very common in the universe. You may be familiar with the Drake Equation, a theoretical way to estimate the number of worlds on which intelligent life capable of communicating via artificial electromagnetic transmission evolves. The exact equation is:

Dr. Frank Drake himself estimated that there may be about 10,000 civilizations advanced enough to broadcast communications over the electromagnetic spectrum within our own galaxy. I consider this to be on the same level as the fellow who estimates that there are none simply because we have never intercepted a radio transmission that we’ve actually been able to decipher from any of them. Both may be completely wrong.

I actually believe that we’re never going to find evidence of extraterrestrial intelligence by sitting back and waiting for them to send a transmission. We’ll have to go out and look for them. While this might not be Star Trek where people cruise around in what real interplanetary explorers would probably consider a luxury liner, serious efforts to find extraterrestrial life will mean ramping up development of serious spaceships that can handle the job. Becoming an interstellar civilization ourselves would make for a neat side effect in this case.

Some Solutions to the Fermi Paradox