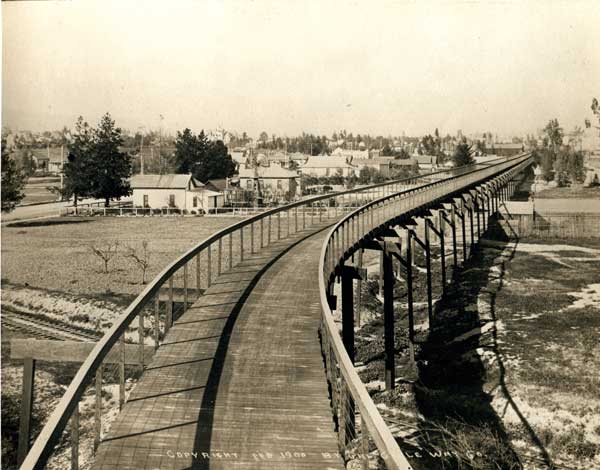 This is what the California bicycle highway would have looked like.

Do you have trouble affording your monthly car insurance premiums? I’m not here to sell you a cheaper alternative or even offer any advice on how to save on your premium. Considering that a certain amount of car insurance is required in most states, there aren’t many ways to save on your car insurance except to either make sure you shop around for the best rate the next time your policy comes up for renewal, or ditch the car and all that hassle in favor of a less expensive mode of transportation.

Not an option, you say? I get that. You have to get to work somehow and some towns have lame public transportation. We’ve all heard those stories about bikers who got ran down by drivers who claim that they never saw the bicycle. I honestly think it would help if more corporations would simply allow their cubicle-dwellers to telecommute so they don’t have to fight that morning rush hour every day and those commuters who simply have to be on-site to perform their jobs can enjoy reduced congestion and less wasted gas. Better yet, ideas like this proposed bicycle highway from 1897 deserve to be resurrected for the sake of people who are going places but want to lose all the trouble of paying for gas, insurance, maintenance, and everything else that goes into driving a car.

Chill about the pork spending already. That bicycle highway was supposed to be a tollway for cyclers, which means not much would have come out of tax revenue. Anyway, you should take a moment to imagine what it would be like to get into a collision with someone who doesn’t have car insurance and it was the other person’s fault. You file a claim with your car insurance and before you know it, your rates are going up because the insurance company couldn’t collect from the person who was at fault. That’s unfair to you when you were just minding your own business and being a safe driver, and then suddenly you got T-boned by somebody who ran a red light.

Car insurance is required for specifically this kind of scenario. I know people who can’t seem to wrap their heads around actually enforcing the insurance requirement even when it’s meant to protect the rights of people who got into a rather horrific wreck through no fault of their own. If somebody can’t afford the monthly premiums, obviously they can’t afford the fines. The other problem is that they also can’t afford to compensate the other party when they’re at fault in a wreck, which is the actual point of having insurance in the first place. I’ve actually heard stories of people who filed for bankruptcy because they didn’t have insurance and they got sued by an insurance company for damage that was their fault. If you think the fines are bad enough to make impoverished people’s lives miserable, losing the few assets you do have to a bankruptcy court is even worse. So spending the public funds to build infrastructure for alternative forms of transportation seems like a reasonable compromise. I could even get into all the reasons that we should build more bike trails and encourage people to use them, including:

Until that happens, people who complain about the car insurance requirement really ought to rethink their arguments because they sound like people who want to dodge responsibility in the event that they are at fault in a serious car wreck. The fines are really quite minor compared to what people go through when they’ve been in a serious accident, now the bills are piling up, and it was the fault of a driver who is uninsured and unlikely to ever compensate the other parties involved for what happened. These people should focus on support for improved public transportation and some safe bike trails instead. That way, people will at least have choices that don’t involve bicycles competing for road space with large vehicles or uninsured drivers shoving up costs for people who actually have some sense of responsibility.