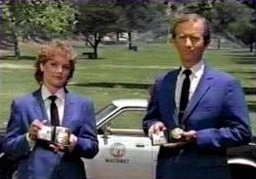 Concepts Used in the Mathnet Series

Some of these might go over elementary school student’s heads, but can lead to discussions of how math and science is used in everyday life and careers. These concepts include:
More Mathnet Episodes

Using Math Can Be Exciting.

If you think Mathnet was just two stiff detectives punching on calculators, think again. The main characters faced all kinds of problems ranging from nearly getting blown up to being accused of theft. They were also believable people who had hobbies like SCUBA diving and model airplanes and also enjoyed occasional appearances by friends and family. They’re pretty much retired now but who knows. Maybe, someday, they’ll have a reunion to relive old times.