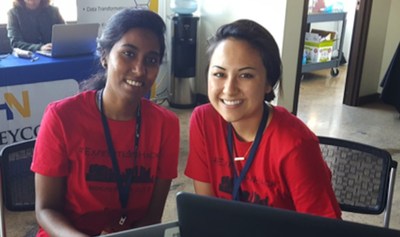 The University of Southern California’s Science and Engineering School, University of Wisconsin, US Geospatial Intelligence Foundation (USGIF), Descartes Labs and the National Geospatial Intelligence Agency have announced that they will be sponsoring a hackathon called ExpeditionHacks, which will focus on the topic of Food Security and Regional Stability. This event will be held in Los Angeles on March 25-26. The National Geospatial Intelligence Agency (NGA) aims to improve the relationship between innovators and the federal government by cutting red tape and sponsoring hackathons like this one is part of its strategy to embrace new and diverse sources of information, techniques, and tools. The NGS recognizes hackathons as a good point mechanism for five reasons:

Can Innovators Trust The Government, Though?

Look at it this way: Bitcoin creator Satoshi Nakamoto’s true identity was never reliably confirmed. Satoshi Nakamoto probably used the alias in the first place because he, she or they didn’t want a ton of attention from the authorities and mainstream financial industry. Challenging the status quo can simply be that risky even when someone creates a new technology that could theoretically lift economically disadvantaged populations worldwide up by their bootstraps. (I must say that the creator of Bitcoin sure knows how to set up a good mystery though. Part of the fun is trying to figure out whether people like Craig Wright are just throwing up smoke — and there really is a guy named Satoshi Nakamoto who swears up and down that he is not the creator of Bitcoin!)

If hackers participate in the NGA’s hackathon, they should be aware that it is a government agency that might (at minimum) steal their concept without compensation. Even if the innovator holds a patent or a patent is pending, the government has given itself the right to use the technologies described in patents without getting permission from the holder of that patent under two very specific circumstances described here — probably because it got sick of paying the widows of innovators like Robert Goddard for the right to use the technologies they had developed.

There’s also the fact that the government has a habit of taxing productive people. That’s what taxes become when they are applied to things like earned income and employers’ payrolls. They’re a tax on productivity and many business leaders will tell you that payroll taxes actually have more of an impact than innovation on the decision of whether they should even take on a new employee. For this reason, people like Bill Gates are often criticized for suggesting putting taxes on innovations that could make industries such as manufacturing more efficient. Innovations are often called “disruptive” because they could cause some short-term economic reshuffling that includes eliminating some jobs and creating others when they enter the market.

However, disruptive new technologies are not necessarily a bad thing in the long run because they can make each individual laborer more productive. Henry Ford paid his workers well because he famously said that he wanted them to be able to afford the cars he made. He could afford to do that because he also employed technologies that made his workers more productive. Would he have done that if the government had taxed the conveyor belt to the point where it wouldn’t have mattered whether he made the investment or not? It’s just as likely that he would have slashed his workers’ salaries and grumbled that he felt like he fought a court battle against the Association of Licensed Automobile Manufacturers for no good reason. This is what happens when the government punishes employers for finding innovations that could increase the number of cars rolling off the assembly line every day without increasing the number of employees working on those cars.

These ladies were not intimidated by things like prejudice, rocket ships or new innovations like that IBM computer.

What interested me about the scene in Hidden Figures where the group of women are marching down the hall to take a look at this new IBM computer was that they weren’t really intimidated by it. They just knew that they were gonna have to learn how to program that thing (and John Glenn, at least, recognized the value of having someone around who could check the numbers) so they didn’t lose their jobs. They just did a slight turn toward learning to program, which requires enough skill at math to make sure their programs are generating correct answers anyway. The computer made their jobs more efficient with only the added caveat that they would have to learn a new skill that built on what they were doing anyway.

So you might be asking, “What has new innovation that might take my job done for me lately, and why should I have to be the one to learn new skills to stay relevant in the job market?” The truth is that no one is making you do anything except consider the fact that a robotic burger flipper is not going to piss on the grill or spit on somebody’s burger just because it’s mad at the boss. It’s not going to cost employers a lot of money in payroll taxes. It can work a sixteen-hour shift without complaining or demanding overtime pay. At worst, it might malfunction and burn a few burgers, at which point the manager is probably going to turn it off and call the technician who bothered to learn more about maintaining a burger flipping machine. So it makes sense to at least look into the possibility of opening a burger joint of your own and running it well enough that people want to come to your restaurant instead of the one that replaced its burger flippers with a mechanical monstrosity.

Of course, you could be the one who takes the lead at hackathons that are sponsored by corporations or government agencies (or any rich fella who is interested in actually solving problems by creating spaces where innovators can work in peace). You could be the one who positions yourself to be on the leading edge of innovations like the ones that could get their start at the NGA’s ExpeditionHacks, even if you’re just one of the many anonymous people who makes sure the screws are tightened correctly on a SpaceX Falcon 9. Like the ladies in Hidden Figures, you could be the one who steals, ahem, borrows a book on programming at the local library so that you can learn how to do anything from create new mobile apps to join a team at the NASA Jet Propulsion Laboratory that develops the software for its robotic probes. And if all else fails, one can always start advocating for the creation of new space colonies so that those who are displaced by new innovations but still have the blue-collar skills that these colonies are going to need have somewhere to go.

It may be that the NGA deserves credit for trying, though. No government agency is going to be immune to innovation-killing bureaucracy. This includes NASA and its bureaucratic reluctance to take risks despite the positive move of forming public-private partnerships through programs like the Small Business Innovation Research program and the spinoff of its technologies into private industry through NASA’s technology transfer program. Anything that comes out of it may turn out to be the quality level best known as, “Good enough for government work,” even if the innovator doesn’t wind up getting the short shaft. However, both the NGA and NASA deserve credit for their attempts to encourage and enable small businesses and individual hackers to create and utilize new innovations.

The Hackathon Finder (powered by Alexa)