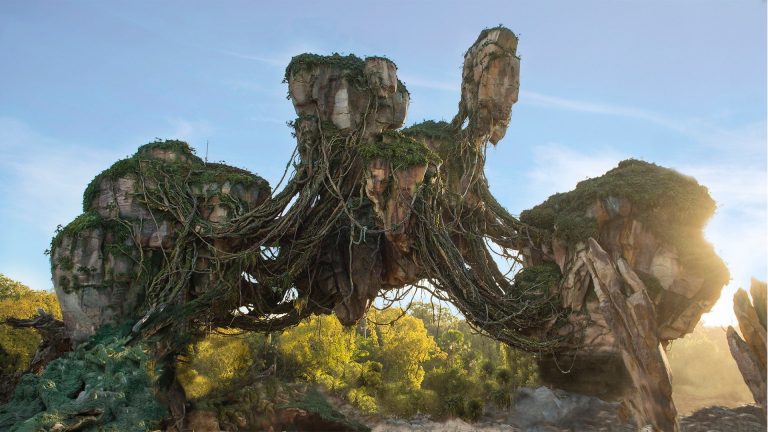 You may know by now that Avatar 2 is set to be released in 2018 after a delay from its originally planned December 2016 release date. However, Disney isn’t waiting to bring a piece of Pandora to Earth so that people can explore the impressive landscapes without getting into a fight with a Na’Vi. Disney CEO Bob Iger recently announced at a shareholders’ meeting that Pandora — The World of Avatar is set to open at Animal Kingdom on May 27.

Don’t forget to pick up your copy of the movie Avatar to watch on your way down to Florida and Disney World.

This 12-acre simulation of the Na’Vi homeworld shows what Pandora could look like a generation after the events in Avatar. Guests can experience a ride on a Mountain Banshee over a variety of landscapes like bioluminescent rain forests and floating mountains on Avatar Flight of Passage. The family-friendly Na’Vi River Journey will take you down a hidden river to an encounter with a Na’Vi Shaman. When your Pandoran adventures make you hungry and thirsty, you can dine at Satu’li Canteen or grab a drink at Pongu Pongu. The souvenir shop Windtraders features toys, “cultural” souvenirs and science kits.

The expansion completes the transformation of Disney’s Animal Kingdom into a theme park that families can end their day at Disney World at before returning to the Disney Resort or local hotel for the night with captivating nighttime offerings and extended entertainment. Pandora – The World of Avatar is a creative collaboration by Walt Disney Imagineering, James Cameron and Lightstorm Entertainment to bring the mythical world of Pandora to life. If you are one of the handful of people who hasn’t seen the movie Avatar yet, it’s definitely recommended to pick up a new or used copy on Amazon or eBay for the sake of context (and to keep the kids entertained during the trip down to Florida) before you visit this new addition to Disney’s Animal Kingdom.

Book Your Flight to Florida with CheapFlightsNow