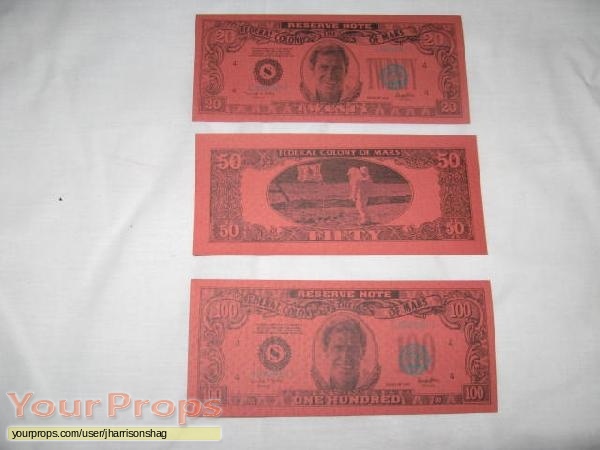 Martian money as imagined by Total Recall. Thankfully, we have cryptocurrencies.

How often do you get into conversations about the future of economics? I’ve seen a few lately where people were considering the economic models of a future Martian colony. It’s a good thing to think about in advance so we can weed out the obviously ill-considered concepts, actually. Talking about economics on a space-minded forum isn’t going to stop somebody from trying one nutbrained idea or another when colonization actually takes off, but it’ll be good to know that they’re out there so we can steer them into a situation where their proponents won’t hurt anyone but themselves when they inevitably have a meltdown.

I have reminded people that any future space colony should plan for the inevitability of trade between colonies or get left behind. Interplanetary traders will ignore a colony that uses the Resource-Based Economy (RBE) model and failed to plan for the need for a medium of exchange that can be used for trade. Then what’s going to happen when something goes seriously wrong on that particular colony and they can’t fix it on their own? For quite a while yet, most other colonies are going to be just barely holding their own, nobody’s going to have any resources to spare for a charity case, and they’ve already ticked off the traders by not being able to pay for what they need to make repairs. That’ll be when they start realizing how idiotic they were for not making use of a medium of exchange that can be used for trade.

People are going to make the journey to Mars because they want access to more opportunities than they have on Earth, not because they really care about somebody else’s attempt to create Utopia. Think of it as the first interplanetary gold rush if you like. A lot of people are going to get wiped out by local hazards, some will give up and go home before they get very far, and some will come out of it with more wealth than they had before. Economic theories like RBE are going to be utterly incomprehensible to these people and they aren’t going to hang around a colony that isn’t going to compensate them for the work they do in a way that they can understand. That’s how you’re going to see the formation of colonies that end up looking like a cross between the half-tamed frontier world full of opportunists and criminal syndicates presented in Robert Zubrin’s How To Live On Mars and every gold-prospecting camp you ever saw. If you’re an RBE supporter on Mars, don’t be surprised if you suddenly find yourself outnumbered by the prospectors who look at you like you’re weird and then ignore you.

Fortunately for the rest of us who don’t see a pure RBE economy happening, there is such a thing as cryptocurrencies. Our futuristic interplanetary traders will likely make use of some version of Bitcoin or Marscoin, maybe even Earthcoin, when trading between colonies. Right now, Bitcoin is a good way to bypass all the hassle of dealing with Foreign Exchanges, international banks, and which government doesn’t like whom this week. Interplanetary traders would certainly favor them because they can carry as many cryptocurrencies as they like on a tablet clipped to their belt. In the future, cryptocurrencies could become a kind of “Federation Credit” system that can serve RBE supporters who can swallow enough pride to keep their colony from being left behind economically. Then cryptocurrencies become a universal form of currency that can be used by anyone who choose to “opt in” for any particular currency.

RBE can work on the local level, but if this economic model gets carried over to Mars, I would prefer that it be because it gives a survival advantage to those who use it rather than because somebody in a position of authority tried to force a square peg into a round hole. Mars is not a particularly friendly environment to begin with, so if you want to use it for socioeconomic experiments, you should first do some soul-searching to make sure you can sleep at night if you get a lot of people killed because you chose the wrong socioeconomic model. If the answer is no, you may be better off spending the money on a seastead where the people can at least straggle back to land if and when things go wrong. Then the rest of us can get on with the work of building the first society on another planet using models that actually make sense within the context of Mars.