Right now there are a lot of disappointed people on this planet. The Mars One applicants just went down from more than 200,000 people to 1058. Some of those who have been turned down at this stage may be nursing hurt feelings right now if what I’ve seen so far is any indication. If you had the moxie to let it all hang out with a nude video, it has to be disappointing that Mars One didn’t take your willingness to buck what’s considered normal very seriously. However, I wouldn’t take the rejection at this stage very personally. There are still ways you can stay involved until the applications open up again.

Even though you got rejected for this round, you will not be entirely out of the running unless you give up now. I know for sure that Mars Orbital is talking about taking applications for their planned Martian space station later this year. Mars One will also be opening applications up again in the near future. This is why I’ve recommended staying busy and focusing on self-improvement until another window opens up. At the least, I would be looking into local community colleges to brush up on skills. There will be other opportunities.

Even though you didn’t make this cut, Mars One and its contractors will very likely have other positions open. It can range from the person that handles quality control to the electrical engineer who makes sure all the circuits go into place correctly on the crew capsule. Getting involved with actually preparing the hardware needed for the first Martian colony will be a good proof of your character. It says that you’re willing to take on your share of the work even though you didn’t make it on the first try. Mars One could see that when you’ve updated your resume for the next application round.

I’ve seen waiting for the selection emails as a test of our patience. It was months between the end of the Round One applications and the announcement that the applicants had been whittled down to just over one thousand for Round Two. In December, barely a week passed when two or three people hadn’t asked if anyone had heard anything yet. Now that we know for certain, your test of patience will be waiting until the selections open up again. It will likely seem like slow going, which is part of why I think it’s a good idea to have something to occupy your time. You should have something to think about until the day when you hear that Mars One is seeking new candidates.

Trust me, I know what it feels to be rejected. Until now, I never considered the idea that I could actually be popular. It makes for a thick skin. The disappointment only hurts for a little while. I just think I finally found my niche with Mars One and I’m going to see exactly how far I can take this opportunity. So stick with it, and you’ll get your turn when you’re ready to try again.

A Humorous Perspective on Rejection

Let’s face it. Rejection hurts. But the authors of these stories have found ways to live with it while still retaining their sense of humor. 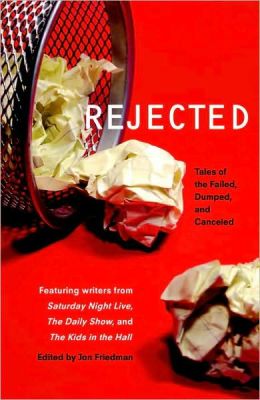