The face of the watch created by Garo Anserlian. Image credit NASA.

Mars has a slightly longer day than Earth does at 24 hours and 39.5 minutes. You might not think that’s very long – a difference of slightly over half an hour – but the people who worked on the Phoenix Lander in 2007 could tell you stories about how it messed around with their biological clocks for the entire ninety days. They had to hang shades from the windows to keep daylight from streaming through the windows when their clocks, set to Martian time, said it was three in the morning. Imagine holding a job that requires you to report to work 39 minutes later today than you did yesterday. The catch is that you have to tack that 39 minutes onto the end of your shift. Yes, it was like that for ninety days straight. As you can see from the below video, it can cause a certain amount of havoc in the personal lives of the people involved.

Watches like this Invicta selection would be moderately impractical on Mars besides being out of the price range of most aspiring Martians.

Just getting used to Martian time in which the days are called “Sols” to distinguish them from Earth days is a challenge. Recognizing the problem of constantly having to convert between Earth to Mars time, NASA hired master watchmaker Garo Anserlian to design a watch that could operate on Martian time. He was the only watchmaker who was so intrigued by the challenge that he didn’t insist on a minimum order or tell NASA that it was impossible. He described it as two months of frustrating work in which he damaged watches and occasionally felt like giving up, but finally managed to create a mechanical watch that is off by only ten seconds per day. Martian timepieces don’t really sell all that well outside of the community of Mars enthusiasts and the people who study Mars for a living, but they will be very useful when we actually start sending people to Mars.

So now you have a mechanical watch that is pretty good at telling time on Mars for something that runs on gears that are difficult to configure exactly right. Now you want to set it for local time, right? Well, Mars doesn’t really have set time zones yet. Right now, the system used by the Jet Propulsion Laboratory for every Martian mission is much like the system that the U.S. used to have before time zones. Each city had its own local time, and that’s what caused so much confusion for railroads that they pushed for time zones to make scheduling easier. If you want to figure out what the time would be under this system, just calculate the point at which the sun crosses the meridian at your location to get the Local True Solar Time – basically, noon at your location. This can vary because the orbits for Earth and Mars are not perfect circles, so astronomers stabilize the system by using the “fictitious mean sun” and charting it using an analemma. On Earth, this analemma looks like a figure eight. On Mars, it has a pear shape. Once you have the local noon, you can compare it to an arbitrary mean solar time that has been calculated by choosing a prime meridian and calculating its local noon. And I say “arbitrary” because Earth’s prime meridian runs through Greenwich but it could have also run through St. Petersburg (formerly Leningrad) or Beijing if our geopolitics system had been different at the time in which we had to choose a prime meridian. So Curiosity and Opportunity both use their own local times, but at some point we will choose a prime meridian that could easily be determined as the longitude at which the first humans land on Mars. 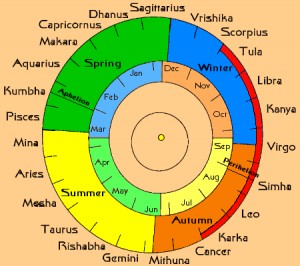 A comparison of the Darian and Earth calendars. Image credit Thomas Gangale

Another tricky timekeeping element is the Martian year, which is 688.59 sols long with the two moons orbiting too fast to be useful for dividing the year up into months. Goddard Institute for Space Studies emeritus professor Michael Allison has created a calendar with ten extra months scattered among the familiar Terran months. That system, he says, would keep the seasonal equinoxes and solstices in their familiar months. Another idea adopted by Robert Zubrin makes use of a zodiac system in which the sun appears to pass through each constellation as it would be seen from Mars. The Martian year would be divided up into 24 months, with only the complication of having only 12 Zodiac constellations. That means using both the familiar Latin names and the less well-known Sanskrit names for each sign of the Zodiac. Add in leap years every even-numbered year except for those divisible by ten, and you have a workable Martian calendar. Thomas Gangale, the designer of this system, dubbed this the Darian calendar.

Will you be one of the first to wear a watch on Mars? It would be hilarious to see one of us in a Buzz Aldrin pose with the watch in an obvious position on the off-chance that one of the large watchmaking companies paid big bucks to Mars One for the privilege of creating a watch for us to strike poses with. And hopefully it will be one that actually does a good job of telling time on Mars. Maybe we ought to see if we can look up Garo Anserlian to do the job for us.

Watches Made for Earth