So you’ve finally gotten fed up with all the hype surrounding “Twilight”. I don’t blame you. I never really got into it myself. You might wonder what happened to the Good Old Days when books like “The Wizard of Oz” were popular.

The good news is that those books are still around. They just aren’t on the brick-and-mortar bookshelves much anymore. If you know where to look, you could snap up some of those old children’s classics at a very fair price. So here’s a few favorites that I still read every once in a while when I want to get nostalgic about my own childhood.

Bilbo Baggins is content to have a small, ordinary life, forgetting any dreams of adventure and keeping the respect of his neighbors, until a wizard shows up at his door. The wizard is looking for a thief willing to partake in an adventure and turns out to be none other than Gandalf. Despite his better sense, Bilbo is recruited to join a band of dwarfs in an attempt to take a treasure and a kingdom back from a dragon named Smaug. Now he must test the limits of his luck and, to his great good fortune (maybe), becomes the new owner of a magic ring that can turn its owner invisible. It’s definitely recommended to read this before you see the movies because the book is way more fun and “kid-friendly.” Bonus points if you can find a copy of “The Annotated Hobbit,” which includes text from the original version, including a very different version of the chapter “Riddles in the Dark,” featuring (who else?) Gollum.

The Wonderful Wizard of Oz

This one’s my favorite return-to-childhood book. Significant differences from the movie include Dorothy’s silver shoes (not ruby), and the Lion faces many more challenges to his (supposedly nonexistent) courage but winds up returning to the forest as the King of Beasts anyway instead of staying to assist the Scarecrow. Also included are bear/tiger hybrids called Kalidahs, the Queen of the Mice, and the unnamed Good Witch of the East. The Wicked Witch of the West and Glinda, the Good Witch of the West, don’t make an appearance until closer to the end of the story. Literary experts say that there were many metaphors the socio-economic and political conditions of the era in which The Wonderful Wizard of Oz was written, but they have a tendency to analyze things to death. I just like to read the book and its sequels (more than 40 of them, and that’s just the canonical list!).

Alice in Wonderland & Through The Looking Glass

The barriers between our mundane world and our fantasy-land of choice are often very thin. Children are more prone to drop down rabbit holes or fall through mirrors into a fantastical Wonderland, so if they disappear for a little while and then reappear, be sure to ask them about their adventures. Alice doesn’t have to do any sword-swinging like she did in the climax scene of the Tim Burton version, but she still faces the dangers of her own mad Wonderland along with a tendency to grow or shrink when she eats or drinks anything. Only when she grows and finds her confidence can she stand up to the insane situations and a mad Queen of Hearts that is all too eager to lop off a few heads. A few familiar characters from the cartoon version actually don’t appear until “Through the Looking Glass”, which is why I recommend buying both as a set if you want to see Tweedledee and Tweedledum.

The Lion, the Witch and the Wardrobe

While staying in the home of a professor during the London Blitz, Lucy leads the Pavenski children into the world of Narnia through a wardrobe, where they find themselves in the middle of a classic war between Good and Evil. When Edmund turns traitor, the remaining Pavenskis must find the Lion Aslan for help with the assistance of the friendly Beavers. Sharp readers will catch many parallels between the Narnia tales and the Christian traditions of our world. Publishers now call this one Book #2 in the Chronicles of Narnia series even though it was the first Narnia book to be released. (If you’ve been waiting for Disney to make the rest of those movies, don’t hold your breath. They said they probably won’t after Voyage of the Dawn Treader sort of flopped in theaters.)

The Adventures of Huckleberry Finn

Set in the pre-Civil War American Midwest, Huckleberry Finn escapes the clutches of his alcoholic father and teams up with Jim, an escaped slave, in an attempt to reach the free state of Illinois. Finn wrestles with his conscience in an environment where he was taught that helping slaves escape is wrong until he finally mutters, “To hell with it.” After several adventures and some misadventures, the protagonists have a series of happy endings. Huckleberry Finn is a period piece that is best reviewed in the context of the time and does contain language that could be considered offensive in the 21st century, but can be a good teaching tool about race relations, dealing with moral conflicts the way Huck Finn has to while helping Jim escape, and the history of the period that this book is set in.

The boy who never grows up bring three children from a home with a nanny who happens to be a dog and a stern father who is intent on kicking his oldest out of the nursery to his home in Neverland, a dreamland populated by a tribe of Lost Boys, Indians, a crocodile that ticks like a clock, and the pirate group headed by the evil Captain Hook. While there, the children begin to forget their old life in favor of the wonders surrounding them. When Captain Hook starts making real trouble and kidnaps the newcomers to Neverland, Peter Pan must save the day without losing any of his innocence and beginning to grow up. It’s a fun romp for children who don’t see why they have to grow up or adults who secretly wish they could be children again. Fun Fact: Barrie is said to have invented the name of Wendy specifically for this story.

Four children run away after the death of their parents and set up residence in an abandoned boxcar. Their only wish is to avoid being separated from one another as the owner of a bakery threatened to do. They connect with a grandfatherly figure and are instrumental at solving several mysteries in this series of books. The children are astonishingly well-behaved for children in their situation, though it does help that the older ones look out for the younger ones. These books can be a good jump-off point for teaching kids about problem-solving and good behavior. If you already have earlier editions in your home, you’re lucky; they might be collector’s items. Even if you don’t, this makes a nice selection for children who would benefit from freely selected summer reading choices. 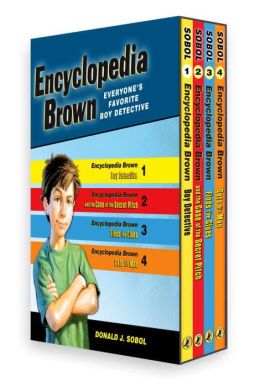 Can you solve these mysteries before Encyclopedia Brown does? Encyclopedia Brown and his feminine partner, Sally Kimball, who has become known for her ability to drop a bully in one punch, work together to foil the plotting of Bugs Meany and his Tiger gang, help Encyclopedia’s father, a cop, solve cases that have stumped the regular police force (usually at the dinner table and by the time dessert is served), and walk around town putting a stop to scams and minor nuisances. If anyone in town needs a mystery solved, he or she can hire Encyclopedia Brown for “25 cents a day, plus expenses” and he will usually solve them in a day or less. In most books in this series, the author challenges readers to solve the mysteries before the ending is revealed.

The pampered and ill-mannered Mary Lennox is found in her all-but-absentee parents’ mansion after a cholera epidemic wipes out the parents and their servants. Moved to a rich uncle’s manor, she is largely left to entertain herself and begins to lose enough of her disagreeable nature to connect with the servants there. She discovers a secret garden that has been locked up and neglected and, being just the right age, claims it as her own private domain. She also discovers a cousin named Colin, whom most of the servants refuse to admit exists because he has a spinal malady that is considered incurable. Can the secret garden help Colin defy the medical knowledge of the day and run again? 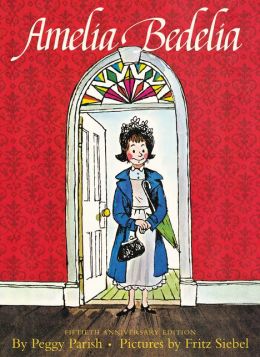 Amelia Bedelia has a bad habit of taking everything literally. She makes a very good sketch of curtains when told to “draw the curtains”. She makes coffee cake by combining coffee and cake. She steals bases while playing baseball, but does return them with the home plate full of cookies because “you should never return an empty plate.” She even almost gets herself fired by misinterpreting her employers’ list of things to do. (How do you “dress a chicken”?) The results are usually humorous and can be made even funnier by reading them out loud in an exaggerated English accent. Collect the entire series for more amusing visits to the world of Amelia Bedelia.

Did I miss one of you favorites? I am such a bookworm that I can’t even remember all the books I read as a child. Your Top Ten list might be different from mine, so drop me a line and you might remind me of one that I just forgot about.