Access control lists (ACLs) are used to filter packets traveling over the network according to rules set at the router level. They can be set to filter traffic based on source or destination IP addresses, protocol and port number, reference NAT information, filter debugging commands, and work with route maps. ACLs can be applied to any of your router’s interfaces, including the Telnet ports.

The common port numbers used in ACLs are necessary to know when taking a CCNA exam and when working out in the real world. 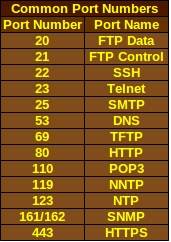 Wildcard masks are an essential part of many tasks such as managing Access Control Lists and helping some routing protocols run smoothly. They provide a way to tell routers which parts of an IP or network address to match. Wildcard masks work at the binary level using 1s to tell the router to ignore the digit and 0s to tell the router to match the digit. In human-readable form, wildcard masks have the same format as subnet masks and can be calculated by subtracting the subnet mask from 255.255.255.255. A wildcard mask is necessary if you are configuring your ACL to match entire subnets or networks. The command would look something like:

Configuring ACL to allow or deny specific hosts is a little easier if you’re using standard access lists because you don’t have to calculate for wildcard masks. Just make sure you don’t mix up the commands for allowing subnets and allowing hosts. The command for hosts looks like, Router(config)# access-list 1 permit host 172.16.1.3.

Remember what I said about extended lists being a bit tricker to manage? To configure them, you need to know the service or protocol, the source network or host, the destination network or host, and the port number you want to allow or deny for each entry. The command will look something like:

You can configure live Named ACLs that haven’t been paused, making them convenient if you are prone to forgetting to reactivate your ACLs when you are finished configuring them. The syntax for configuring named ACLs is a little different. First you tell the router that you want to configure a named ACL, and at the same time, tell it whether you want the ACL to be standard or extended: ip access-list extended YourACLName.

Your router prompt should now look like Router(config-ext-nacl)#. You can now configure your new named ACL with commands like, deny tcp any any eq 80.

You’re going to waste a lot of effort if you have all your ACLs configured but never assign them to interfaces. Common mistakes include disabling ACLs and then forgetting to enable them again and assigning the wrong ACL to a particular interface. First, you access the interface that you want to assign an ACL to with a command like interface e0/0. Then you can assign the ACL you want with the command ip access-group 101 in.

Configuring ACLs does take practice, so it helps to practice in a laboratory setting. There’s no need to be embarrassed by having to learn because even experienced networking professionals can be thrown by an ACL that hasn’t been configured correctly. You can call it “testing the new ACLs” if somebody walks in on you.