Okay, this one has a bit of a backstory. For the past couple of Christmas seasons, my mom’s mom (my grandma) has done a White Elephant exchange. Each family member has a turn and we can choose to take a gift off the table or “steal” somebody’s already opened gift. They’re mostly jokes. Two people got fish complete with food and tanks and my brother had to drag the Beta fish across two states to get it home. So my cousin Andrea has a turn and opens up this Chia herb garden. She obviously wasn’t real enthusiastic about it, but I’m going, “Hmm…” Considering some of my life plans, I need to get used to having an indoor garden. So, when my turn comes up, she isn’t too upset when I decide to “steal” it. 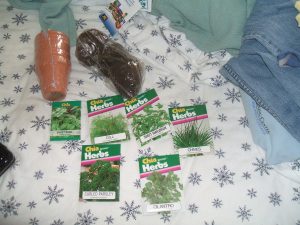 It’s already been a few weeks since then and I finally opened up the box. Okay, six packs of seeds and three teeny-tiny pots. I’ll need to either make some choices or scrounge for some more pots and potting soil. But no big deal. I just set up the pots in the little plates that came with them, put the dirt-sponge things into them, water them and select the three types of seeds I’m going to try growing first.

Basil, cilantro and parsley look good for starters. So I open them up. The basil seeds are tiny little black things that I’ll have to be careful not to spill. I just pour a few into my hand and sprinkle them into the pot on the left. They kinda disappear into the dirt. Cilantro seed are a little bit bigger, round and tan colored. They’re a little easier to see when I put a few in the middle pot. Parsley seeds might be a bit bigger than basil, but not by much. If I squint, I can kind of see a tan-outlined smiley face in the pattern they make when I sprinkle them into the dirt. 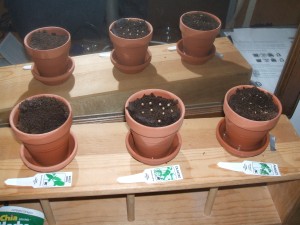 I’ll probably save the rest of the seeds for either another batch or more pots. When they start to sprout, I’ll just move them to a windowsill so they can get a good amount of natural sunlight. Having some fresh herbs in the middle of spring could make some of the neighbors who are JUST starting to get their gardens in jealous. I’m not quite the person who has racks of hydroponics on a sun deck, but between that and the avocado tree I have on my dresser, it’s pretty cool.

In fact, I wonder if Uncle Jim is having any luck with that Chia Duck Dynasty Uncle Si grass beard thing he got. Andrea seemed happy with the cheese board she got with the gift exchange and made noise about how she doesn’t have much of a green thumb anyway, so it worked out. So we’ll see how my recipes turn out when I start adding my freshly grown herbs to them.