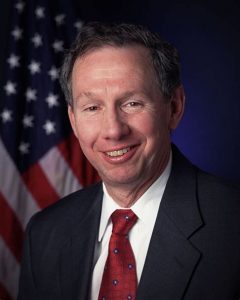 February 16, 2018 – Reston, Va. – The American Institute of Aeronautics and Astronautics (AIAA) congratulates Mike Griffin on being confirmed as undersecretary of defense for research and engineering. Griffin will oversee Pentagon technology investments and set R&D priorities, as well as serve as chief technology officer.

AIAA President Jim Maser made the following statement upon learning of Griffin’s confirmation:

“We are all fortunate that Mike Griffin will be returning to government service. Mike is the right person for this newly created and crucial position. Maintaining technological leadership and solving military space challenges is critical to the security of the United States and no one understands this better than Mike. He has been a tireless advocate of—and evangelist for—developing U.S. space and aviation technology for decades and has served in industry, academia, and the civil and national security government space sectors. His leadership and knowledge of aerospace and defense technology investments will positively influence the near- and long-term security, innovation, and technological advancements of our country.”

Griffin’s extensive experience in government, private industry, and academia is reflected in his wide-ranging career. As NASA’s 11th Administrator from 2005 to 2009, Griffin brought vision and innovation to the Commercial Orbital Transportation Services (COTS), a private–public partnership designed to provide commercial cargo launch services.

In addition, he served as Space Department Head at Johns Hopkins University Applied Physics Laboratory, was previously President and Chief Operating Officer of In-Q-Tel, Inc., and also served in several positions within Orbital Sciences Corporation, including Chief Executive Officer (CEO) of Orbital’s Magellan Systems division and General Manager of the Space Systems Group. Most recently he was Chair and CEO of Schafer Corporation.

Griffin is an Honorary Fellow and Past President of AIAA and has been a member for more than 40 years. He also is a Fellow of the American Astronautical Society, and a Senior Member of the Institute of Electrical and Electronics Engineers. Griffin is the recipient or co-recipient of numerous AIAA awards including the Goddard Astronautics Award, the Space Systems Award, and the Summerfield Book Award. His other honors include the NASA Exceptional Achievement Medal and the Department of Defense Distinguished Public Service Medal, the highest award given to a non-government employee.