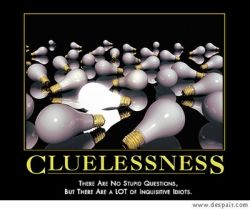 So you might have heard the quote, “There are no stupid questions, only stupid answers.” Only, sometimes you wonder about that. There always seems to be that one person who has to ask something totally random or obvious, and sometimes those sarcastic answers totally make sense. On the flip side, you might be the person with a question and you wonder if it will come off as stupid. You could spend your whole life wondering about it and never work up the nerve to ask. Well, there’s one day when you can ask those stupid questions without looking dumb. That’s right, September 28 is Ask A Stupid Question Day.

Who Comes Up With This Stuff, Anyway?

Ask A Stupid Question Day was invented by teachers who wanted to encourage more participation in the classroom. They noticed that some students tended to hang back because they were afraid that they would look stupid if they asked a question. So they invented a day where the students could ask their questions. It evolved into an annual event that usually takes place on the last school day in September.

Ask that question you’ve been wondering about. Maybe you know that guy who is an expert in a certain field and you’re afraid that he will think you’re stupid if you ask him something that sounds basic. Actually, it’s very possible that he’s heard it before. He might even be used to pointing to a certain part on your computer if you don’t know what a hard drive is, or showing you how he finds the satellite for your satellite TV.

Take a moment to answer other people’s stupid questions. They might sound stupid at first, but they might actually save trouble on down the road. Besides, really, how much trouble is it to answer their question and move on?

Be sure to thank somebody who answered your “stupid” question. You might not have realized until later how foolish the question sounded. So go ahead and show some gratitude with someone who was patient with your questions. 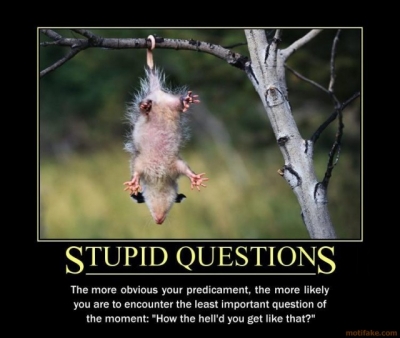 Is There Such A Thing As A Stupid Question?

Well, sometimes I have thought that there ought to be a seminar somewhere on how to ask effective questions. It is a skill that can be learned. With a little thought, you can phrase your questions so that they don’t sound quite so stupid and so the other person won’t be offended. You’ll be more likely to get good answers that way.