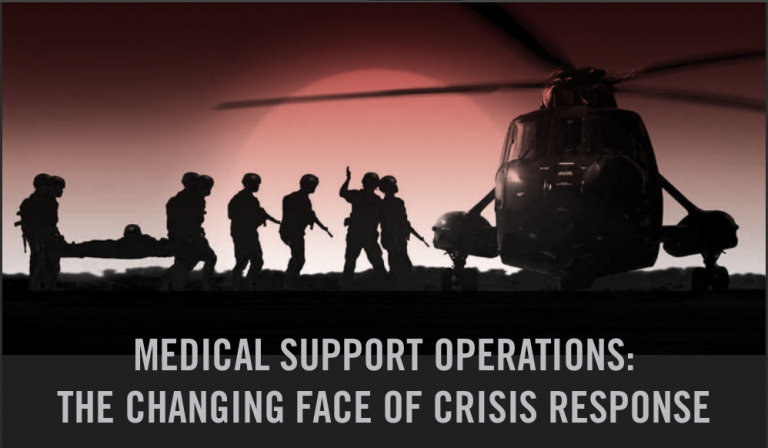 The challenges involved will be discussed at this year’s Medical Support Conference, which is taking place in London on April 25-26, 2017. This conference is currently being organized with the official support of the UK MoD’s Defence Medical Services and will focus on high-level strategic discussions on future threats to health. Case studies that will be presented by the US Air Force, NATO, ICRC, and German Red Cross will detail current attempts to improve both capability and interoperability. Innovations in clinical delivery, including telemedicine, will be crucial to a forum which recognizes the need for rapid, cost-efficient and targeted medical care. Telemedicine is expected to be a hot topic both at the conference and in future discussions, with 60% of respondents to the Defence IQ survey saying that this will be the most important emerging technology within the future medical support framework.

Dialogue As A Series Of Transactions

Communication can and should be seen as a kind of transaction. Every time you send an email or letter, make a phone call or post a message in a chat room, there is a recognizable sender (you) and receiver (the person you send the message to). The communication will ideally be two-way. The other person picks up the phone or emails back the information you requested. Then it becomes a dialogue that consists of a series of transactions that contain valuable information.

End-to-end communications systems are, naturally, critical for medical support teams. Besides the 60% who said that telemedicine should be seen as a vital new technology, another 18% said that whole hospital information systems are important for future medical support frameworks. Both rely on a robust and reliable medium for both sending and receiving information in real-time. In a chaotic environment such as a war zone or major natural disaster, medical support teams can benefit from a communications system that is decentralized enough that they won’t be cut off from their base of operations or other teams if the operation of one node is disrupted.

As with all things in the defense niche, security also matters when discussing medical support and the need to maintain the integrity of information that may be stored or transmitted using Information Systems hardware and software. In a 2015 incident, medical devices that contained malware that could be used in cyberattacks or by cyberspies were discovered. In a string of other security incidents, hospitals were infected with ransomware that rendered their data unusable by encrypting it and demanded a ransom. If medical support teams have to deal with similar issues while out in the field, it can cost lives that might otherwise have been saved. Because medical devices often make use of closed, proprietary software that are guarded by secondary firewalls, it can be difficult or downright impossible for security teams associated with medical support staff to detect problems with the medical devices’ software.

The highly sophisticated attacks made use of devices like X-ray machines and sensors to compromise passwords and grant the attackers possible access to patient data. Cyberespionage by agents in China was suspected in at least one case. It may even be possible for a cyberattacker to program these devices to give false readouts or otherwise compromise the proper function of devices that require the proper functioning of digital components. Of course this was not the fault of medical personnel and patients who were using them for their intended purpose, but this should be seen as proof that medical devices that may be used by medical support teams may become a security vulnerability at any time. The obvious solution would be to require medical devices and any other device that might rely on digital components or access the medical support information systems network to make use of completely transparent, secure, and open-source software so that infected devices can be detected and quarantined quickly.

What The Blockchain Can Solve

Sending a message over the Blockchain need not be very different from sending an email or a text message from a end user standpoint. The sender simply enters the recipient’s address, the message title if there is one, and the message in the appropriate fields and sends it off, and the message is stored in a way that makes it easy for the recipient to access at the earliest convenience. What makes the Blockchain interesting is what happens “under the hood” to make sending secure, fast and reliable communications possible.

To send any kind of transaction over a Blockchain network, the client device only has to be able to connect to one node on the entire network. That’s all it needs, though in the spirit of a decentralized network, it may be advisable to have two or three nodes in pace that the client can “see” even if it only connects to one and can’t tell that there’s actually a hundred or a thousand nodes on the same network.

The nodes store the transaction data and, with the help of processing power, can confirm whether the recipient actually received the transaction. In the terms of communications between militaries and medical support personnel, the Blockchain nodes can tell whether the commanding officer of a military base actually received and read the email sent to him by the chief of the local medical support units. The Blockchain will also know if the commanding officer sent a reply or deleted the email from his inbox without bothering to open it. This can help to address the concerns of the 25% of survey respondents who say that a lack of dialogue between the affected parties is one obstacle to collaboration by making it easier to track down the reasons that the dialogue isn’t happening.

It will still be possible to make it look to the end user like the email was deleted if the app designer chose to include that functionality, but it will be impossible to delete the data from the Blockchain ledger or alter it in any way short of completely disabling the Blockchain’s entire network. It may still be possible to hack into an email account and use it to send false information, but the Blockchain will log that event and it can be used as evidence when reconstructing the event. It may be possible to interfere with a client’s ability to connect to a valid node, but the user of the device loaded with that client will likely take it to the responsible technician for maintenance because his or her messages aren’t going through. It may be possible to attempt to tamper with or hide information, but the Blockchain is based on cryptographic technology that will throw up all kinds of warning signs if someone tries to fraudulently alter data and is designed to be fully transparent to anyone who has permission to access data on that particular Blockchain. If someone tries to hide questionable activity on the Blockchain or tamper with it in any way, the responsible expert is going to notice.

(In the case of Bitcoin, everybody has permission to view data stored on the Blockchain, though Blockchain.info makes it easier. That’s what Bitcoin users are used to. However, some companies and organizations may choose to make their Blockchain apps private instead of allowing the general public to view their data.)

The decentralized nature of the Blockchain also makes it easier to quarantine a malfunctioning or hijacked node without losing much functionality. The issues with hospital information systems being infected with ransomware were partly caused by use of a centralized model that made it possible to shut down access to data by taking over a few servers. That can be solved either by having backup servers and equipment ready to boot up quickly without becoming infected themselves, or by having the data stored and constantly backed up by multiple nodes that can function completely independently, can be separated by a vast distance, and can be quickly isolated from all other nodes if they become compromised without costing the entire network very much. The latter is a decentralized network that can include the Blockchain.

Communications and collaboration issues are scheduled to be among the topics discussed at the Medical Support Conference in April. While the Blockchain isn’t obviously on the conference’s schedule, it may help to provide the reliable communication needed for improved collaboration between militaries and medical support personnel.

The Blockchain on eBay