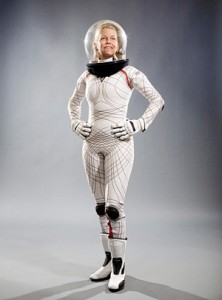 A proposed Mars suit. It might be suitable for outdoor wear, but would colonists want to wear something that looks like Latex all the time? Image credit: IEEE

So you thought about just about everything you need to live on Mars. You have a fully rigged habitat with food, water, oxygen and heat sources. You might even have your 3D printers working away to create spare parts and a first aid kit for the inevitable injuries. But have you thought about where your clothing is going to come from?

No shame if you haven’t. It’s pretty well assumed that future colonists will have thought to obtain something like the spacesuit pictured at left for outside work, though what Robert Zubrin said about suits like this in books like How To Live On Mars was essentially, “Don’t gain weight.” It’s also assumed that the first Martian colonists will have thought to pack their bags with clothing that’ll last a while even when they keep getting snagged on stuff and stained up from handling the dirty jobs. Even the best “self-healing” and easily patchable clothing is going to be reduced to rags eventually, though, and that’s not something people will want to see if the colony live-streams its members’ activities. This means doing one of two things, each of which will have its pros and cons.

The Latest Fashion Trend May Be 3D Printed

What Material Would Be Used, Though?

Good question. Future Martians would be very unlikely to devote growing space specifically to plants like cotton, a single-purpose plant that isn’t for food. However, they will want to do something about all the plant waste they’ll get from growing food. Insects and herbivorous fish could probably thrive on that plant waste (and, of course, chickens can eat the insects if you’re squeamish about eating crickets), but some food-producing plants can also be turned into textiles.

Hemp has been suggested because it can be turned into many materials that the colony will need and textile is one of them. Hemp clothing tends to last up to six times longer than other textiles because hemp is more resistant to mold and mildew, two things that may be unavoidable even with good sterilization procedures for anything going to Mars. Hemp is also very easy to grow with a minimum of fertilization.

Dr. Carmen Hijosa has recently developed a new fabric derived from the leaves of the pineapple plant called Piñatex. The website for Piñatex kids that, “No pineapple was harmed in the making of Piñatex,” so using pineapple leaves wouldn’t necessarily take away from the food supply of a Martian colony that chose to include pineapple plants.

Silk is an option if the colony becomes capable of supporting a silkworm farm. Silk has a remarkable tensile strength (the ability to hold up when stretched) that makes it resistant to breaking when tugged sharply. Traditionally, silk was a highly desirable trade item that helped lead to the rise of the Silk Road. In the modern era, silk could become a highly desirable fabric to Martians who want a textile that is lightweight yet durable.

Polyester is always an option once future Martians have the ability to produce synthetic thermoplastics. However, some sources warn that the manufacture and use of synthetic fabrics could introduce toxins that would be dangerous in an enclosed environment. An alternative might be plant-based biodegradable plastics or plastic substitutes derived from easy-to-grow plants like algae and seaweed.

It would be entertaining to see Mars-inspired fashion that would make today’s hemp bracelets look like just the beginning. However, if Martians were in it to spark a fashion trend, they probably would have just stayed home.

Even so, it will happen. Future Martian traders might pull into an Earth-orbital trading station and look around in amusement at all the Earthlings who are trying to make their traditional garb look good and not quite managing it. From their perspective, it’s like a real cowboy watching some kid in a cheerfully colored cowboy costume. However, they are perfectly willing to sell genuine Martian silk for premium prices on the rare occasions when they actually have it in stock.

Why Use Resources for Clothing, Though?

Why did our ancestors wear clothing? Clothing was invented as a way to protect ourselves from the elements. Martian clothing will likely be utilitarian, as well, mostly because future Martians will have more important things than high fashion to think about. They’ll care more about not getting their clothes torn up through the everyday bumps and snags that will come with life on Mars. The Red Planet is no tropical paradise anyhow.

There might be times when a Martian settlement has to conserve energy partly by regulating their usage of their heating units. During those times, the settlers will be seeking other ways to keep warm so they can stay at peak performance, including wearing layers of clothing that make use of a material that’s good at keeping the heat in.

After all, it’s not just about avoiding offending somebody’s sense of propriety even if you are more productive when you aren’t staring at somebody’s unmentionables. It’s about making a new hostile environment livable for hairless primates who evolved in Africa. Clothing might be a line item that’s not that high of a priority when a fully loaded habitat capable of producing essentials like heat, breathable air, food and water is more important. However, it will be something that needs to be considered once a settlement is established and the clothing items that the settlers brought in their luggage are beginning to wear out.