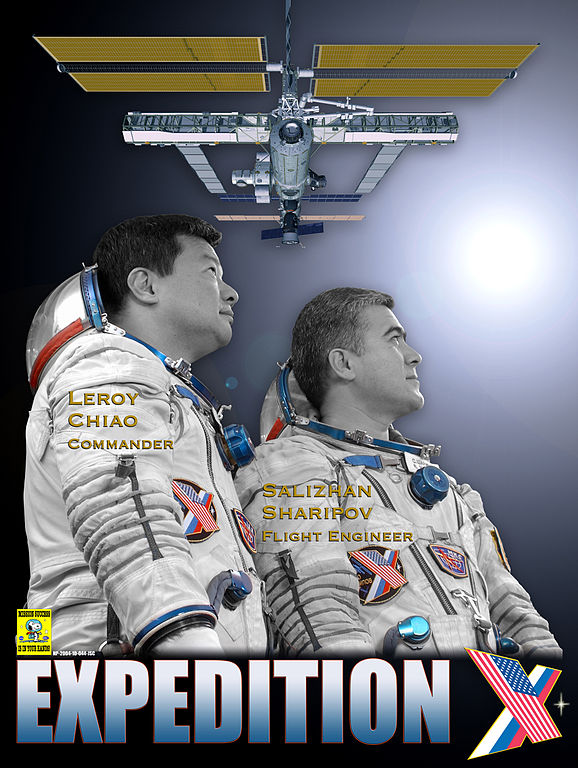 The launch of Soyuz TMA-5 was delayed twice due to technical difficulties. The Russians were characteristically closed-mouthed about the cause and the few details that made it out indicated a faulty ring of bolts on the docking system, and then a leaking membrane in a hydrogen peroxide tank. The Soyuz finally lifted off on October 13, 2004, with Salizhan Sharipov, Leroy Chiao and Yuri Shargin on board. Communications problem delayed orbital correction maneuvers and a malfunctioning braking thruster forced the Soyuz to take a wave-off for docking. Sharipov assumed manual control and earned himself a bonus by performing a perfect manual docking at 00:16 on October 16. 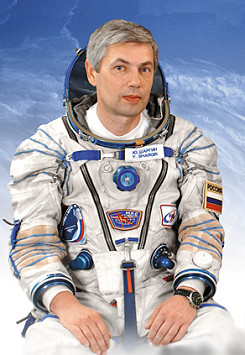 Yuri Shargin promptly transferred his couch liner to Soyuz TMA-4. He was on the space station to perform a package of experiments on behalf of the Russians. Most of his activities took place in the Russian sector and he returned home with Expedition 9.

In the meantime, Sharipov and Padalka continued efforts to repair the faulty Elektron unit while Chiao and Fincke worked on replacing a rotor pump in the EMU. This would hopefully fix the equipment that had vexed the American side before Expedition 9’s first Stage EVA. The four astronauts worked together to ensure a smooth handover and set up experiment packages for Expedition 10.

One of Expedition 10’s goals was to prepare the station for the return of the Space Shuttle with STS-114. Before the flight, Chiao had expressed his hope that the space station could return to three-member Expedition crews soon: “It is a very demanding timeline for a crew of two. … The purpose of the International Space Station is to do all kinds of cutting-edge science that can’t be done on the ground.” The reduced crews, along with time spent dealing with malfunctions, cut into the time they could spend on science. 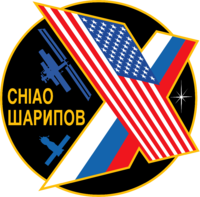 After the official handover on October 22, Padalka and Fincke returned to Soyuz TMA-4 along with Shargin and undocked on October 23. They landed successfully with recovery crews reporting that they had seen the plasma sheath of reentry. Near the end of the month, NASA announced that the Shuttle Return to Flight would slip to May or June 2005 to allow time to recover from the recent hurricanes. Expedition 11 would be delivered by Soyuz TMA-6 and Russia agreed to continue providing Soyuz flights in exchange for more hours spent on Russian experiments.

In the meantime, Expedition 10 started with a few days of light duty. They activated the EarthKam, which captured 800 images over the next eight days. Chiao and Sharipov used the experimental Advanced Ultrasound in Microgravity (ADUM) to scan one another and the results were sent to doctors on the ground. Chiao familiarized himself with the robotic arm (SSRMS) and used the cameras on the arm to take images of a possible dent in the Destiny module that had been observed during STS-113. While analyzing the images, NASA engineers decided that the dent had been caused by flexure due to changes in temperature rather than an impact. The ground reported that the Elektron had been returned to working status, which eliminated worries that the station might have to be evacuated.

Chiao moved the SSRMS so that its cameras could record the transfer of Soyuz TMA-5 to Zarya’s nadir port, freeing up Pirs for use during EVAs planned for the next year. Korolev used the Progress M-50’s thrusters to boost the station’s orbit, which ended with the station’s orbit being slightly lower than planned. Controllers blamed it on “human error” and delayed the launch of Progress M-51 by a day to compensate. In the meantime, the Progress was loaded up with garbage that included an Orlan suit that had exceeded its functional lifespan.

As November continued, Chiao and Sharipov conducted an inventory of their food supply and found that Expedition 9 had eaten into their alloted food. More food was scheduled to be delivered with Progress M-51, but if the Progress failed to reach the station, they would run out in mid-January. Just in case, they scaled back their rations and Sharipov growled to an interviewer, “We are short of food. We are eating less than half of our normal rations.” Considering that later studies would reveal that astronauts on the International Space Station actually burned more than 2,000 calories daily, perhaps his grouchiness was understandable. Both astronauts ended up losing more weight than normal due to the reduced rations.

December began with routine maintenance that included swapping out the filter cartridges on the Elektron and replacing a failed laptop computer with one from Sharipov’s sleep station. Three new laptops were scheduled to be brought up by the Progress. The Destiny module was prepped for more experiment racks that would be delivered by STS-114. With the Soyuz successfully moved to the Zarya module, Sharipov and Chiao performed some practice maneuvers with the SSRMS, finishing by leaving it with each end grasping exterior grapple fixtures in case they did have to evacuate.

Progress M-51 successfully launched on December 23, 2004, and docked on December 25th with Sharipov standing ready to take over manual control of the Progress if something went wrong. His controls were a remote-control system known as TORU. The crew called it “Our big Christmas present” and were delighted that they didn’t have to abandon the space station. They also sent out a special Christmas message and took rest of the day off to celebrate.

The celebration was short-lived, however, as December 26th saw an earthquake under the Indian Ocean that sent a devastating tsunami crashing into Asian coastlines. The Expedition 10 crew photographed the affected coastline and sent the pictures down to Houston for analysis.

NASA Administrator Sean O’Keefe announced his retirement but would remain in place until a replacement could be named. His successor would have the task of returning the Shuttle to flight status, completing the International Space Station, plan for the ending of the Shuttle program and plan for NASA’s future.

Beginning of the New Year

On the International Space Station, 2005 began with another malfunction in the Elektron oxygen generator. Some air bubbles had built up in the plumbing, forcing a shutdown. Sharipov and Chiao purged the system and replaced the electrolyte unit in the Elektron and controllers took the opportunity to add oxygen from the Progress to the space station’s atmosphere while they were working on it.

Experiments performed during the first week of 2005 included the NEUROCOG, which studied how a microgravity environment affects balance. The crew also sent a special message to the victims of the Asian tsunami and worked with Houston to make updates to the computer software. Preparations for a Stage EVA scheduled for January 26th included checks of the Orlan suits, charging of pressure suit batteries and preparing tools.

The pesky Elektron failed again on January 20th but Sharipov was able to get it running again by purging more air bubbles. Houston controllers performed tests on the CMG-2 gyroscope to insure that it ran smoothly at all 15 of its available speeds. Solar storms on January 18 and 20 caused both men to shelter in the shielded Zvezda at intervals. January 21 marked their 100th day in space and, five days later, they were ready for their first Stage EVA. 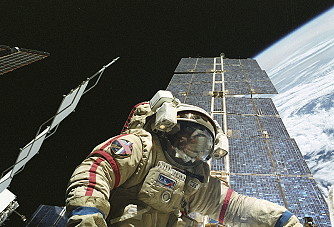 With the station in standby mode, the January 26, 2005, EVA began in the Russian Pirs module with Sharipov and Chiao wearing Orlan suits. On Zvezda, they installed a Universal Work Platform and mounted the German Robotics Component Verification on ISS (ROKVISS). The ROKVISS was designed to test German-built components that included a double-jointed manipulation arm, illumination system, antenna for receiving commands from the ground, and a power supply. At first, the antenna didn’t work, but Chiao solved the problem by returning to the ROKVISS and adjusting the wires attaching the antenna to the power supply.

Other work including moving the Japanese MPAC/SEEDS experiment designed to study micrometeoroid impacts and test the effects of microgravity on a variety of materials to make more room for the antenna on ROKVISS. The two spacewalkers also examined vents connected to environmental control systems that included the finicky Elektron. Sharipov reported a coating of residue on the Electron and Vozdukh vents and an oily substance on the thermal insulation protecting them.

They also installed the Biorisk-MSN experiment near the hatch on Pirs. This experiment tested the effects of the space environment on microorganisms and various materials for an ecological study. The crew then returned to the Pirs airlock and began the process of returning the International Space Station to active status for crewed operations. The EVA lasted for 5 hours and 28 minutes. 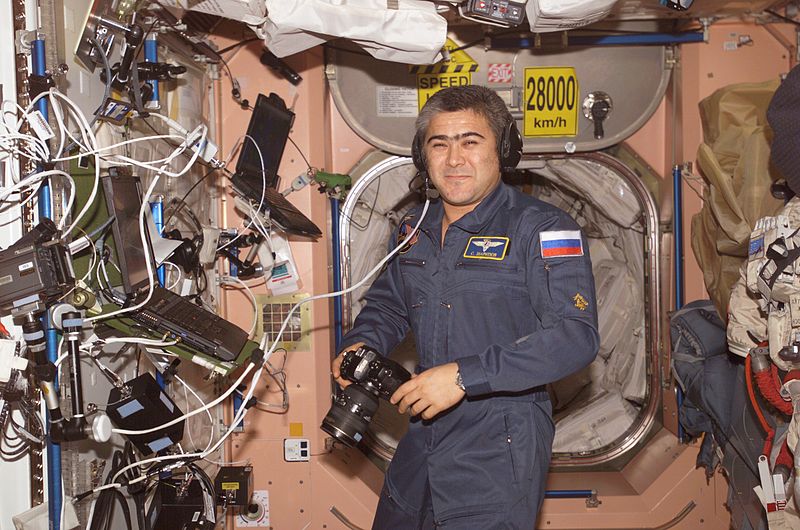 As February began, preparation for the Shuttle Return to Flight continued. Chiao reported that the American items slated to be sent back to Earth had all been packed and they were preparing the Russian items for return. As a precaution, an inventory of remaining food was conducted. Experiments that included work with the EarthKam and a few student experiments were conducted. Maintenance included software updates to the Space Integrated GPS/Inertial Navigation System and routine checks of the EMUs and supporting equipment in the Quest airlock. Controllers in Houston made software updates to the SSRMS which allowed the robotic arm to be controlled from the ground. The new software was tested with Chiao standing by at the SSRMS’s onboard control system in case there was a problem that required him to take manual control. The test was successful.

Propellant from the Progress M-51 was transferred to Zvezda’s tanks and the Progress was loaded with garbage. Progress M-51 undocked on February 27 and spent the next ten days in orbit while the Russians used it for engineering tests. Progress M-52 arrived on March 2, 2005, with 2.4 tonnes of cargo that included 160 days’ worth of food. In the meantime, NASA voiced concern about the long-term launch schedule that wouldn’t be sufficient to fill the long-term needs of the space station.

In the meantime, Michael Griffin took charge as NASA’s new administrator. He had been critical of the International Space Station along with the projected schedule for the Space Shuttle along with plans for sending NASA astronauts beyond Earth orbit. Now he was in charge of carrying out the current American plan for space exploration. 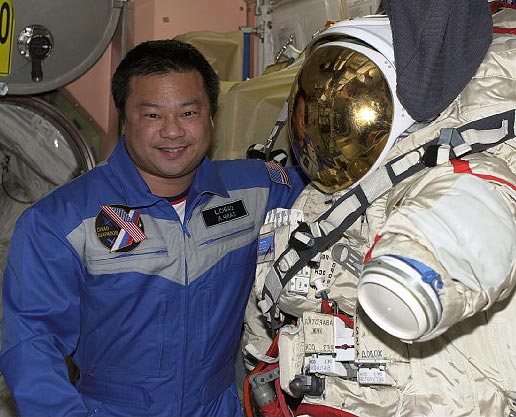 Chiao and Sharipov started their second spacewalk at 01:25 on March 28, again wearing Orlan suits and exiting through the Pirs airlock. Sharipov began by prepping a small satellite called Nanosat and throwing it into an independent orbit. Nanosat was designed to test procedures for satellite control from the ground. The crew also installed three WAL S-band antennae on Zvezda’s ram and installed a GPS receiver as part of preparations for the planned arrival of the European Space Agency’s ATV. They also took photographs of another antenna and secured several cables on their way back to Pirs.

In preparation for this spacewalk, ground controllers had deactivated the thrusters. The station began drifting out of the planned alignment during the EVA activity and Russian controllers reactivated the thrusters once the spacewalkers were out of the danger zone. The two men returned to Pirs one hour earlier than planned after an EVA duration of 4 hours and 30 minutes. Soon afterwards, one of the two working Control Moment Gyroscopes experienced a series of spikes in vibrations. Houston began troubleshooting the problem and the International Space Station was repositioned to reduce the load on the gyroscopes.

As the final month of Expedition 10 passed, Chiao and Sharipov continued preparations for the Shuttle Return to Flight. Some bulky items like Progress docking probes were beginning to pile up in certain parts of the station due to the lack of the spacious Shuttle to transport them back to Earth and the cramped conditions was really getting to be a nuisance.

Can You See The Space Station?