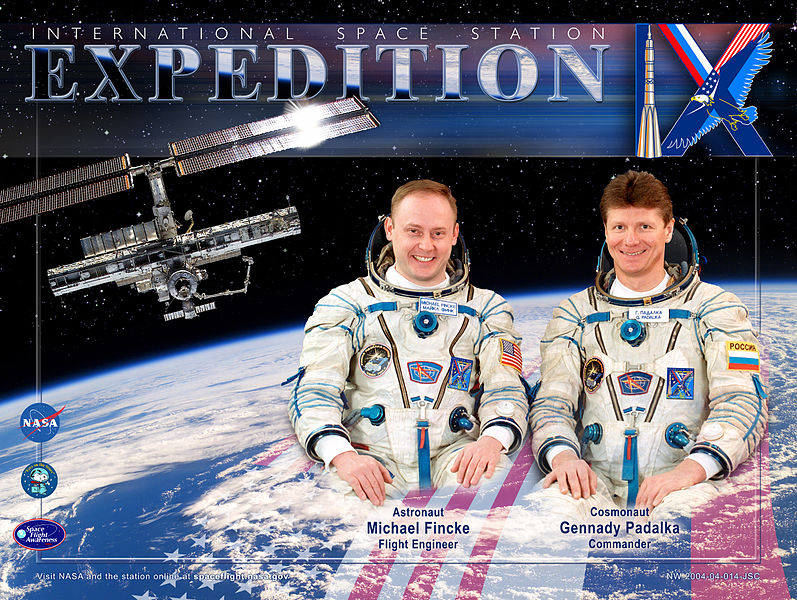 A Look Around The Station 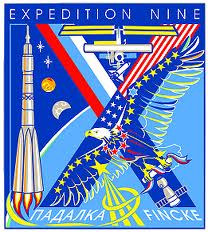 The crew of Expedition 9 had been shuffled around after original crewman William McArthur became ill. He eventually recovered and was assigned to Expedition 12. Expedition Commander Gennady Padalka, Flight Engineer Michael Fincke, and Engineer Andre Kuipers launched in Soyuz TMA-4 on April 18, 2004, and docked with the International Space Station on April 21. The crew went through the usual familiarization routine with the station and Kuipers transferred his seat to Soyuz TMA-3 for return to Earth. 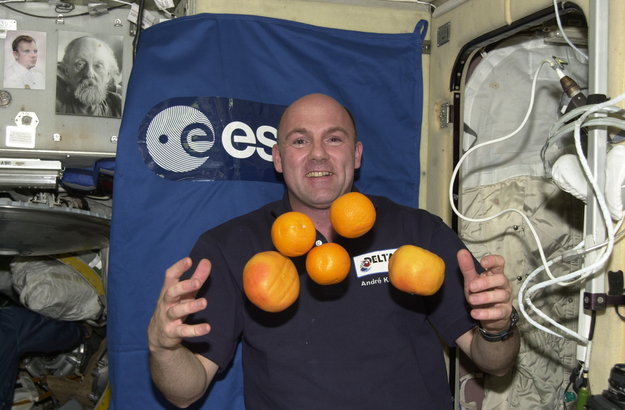 Andre Kuipers has some fun with some fresh fruit during his Delta Mission. Image credit European Space Agency

Andre Kuipers began work on a series of fifteen experiments that included testing the use of a grooved heat pipe to transfer heat away from sensitive equipment to a radiator, a look at reported back pain by astronauts in space, observation of lightning and “sprites,” and a study of bone cells in weightlessness. He also participated in an educational program that included growing watercress in space and a demonstration of human physiology in the weightless environment. He answered questions from the winners of a “Zeg Het ISS” competition in which students had drawn pictures or written stories about astronauts.

Kuipers’ experiments were enough to keep him busy but he also found time for looking out the window. He described it later, “It was amazing, better than I expected. … You see cities from above and lightning on top of clouds instead of underneath. At times like that it hits you that you really are in space.” The heat transfer experiment failed twice; after some troubleshooting, Kuipers ran it successfully the next day. A centrifuge on another experiment gave him difficulties. Otherwise, the experiment package was a success and he returned home with the Expedition 8 crew on April 28. 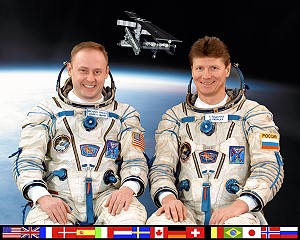 Gennady Padalka and Mike Fincke spent most of May working on experiments along with checking out the American EMUs that were used for spacewalks. Both suits had developed problems with the water circulation system used to keep them cool, which led to a change of plans in an EVA scheduled for June 10. They ended up rescheduling the EVA for June 16 and decided to use the Russian “Orlan” suits.

That gave Russia some leverage to bargain for extra time spent on Russian experiments. They also insisted that future Expeditions should be extended to 12 months. This would open up more Soyuz seats to sell to tourists and they frequently reminded the international partners that they were bearing the brunt of maintaining the International Space Station while the American space shuttle was not in operation. Though some people on the American side were intrigued by the idea and pointed to the fact that some cosmonauts had flown for more than a year on Mir, NASA vetoed that idea for Expedition 10 but was open to the idea of trying it for Expedition 11 if the shuttle was flying again.

In the meantime, the American side uploaded software updates for the multiplexer/demultiplexers and two S-0 ITS MDM computers. Padalka and Fincke loaded up Progress M1-11 with garbage, installed an EarthKam in one of Zvezda’s windows for Earth observations, and took care of some biomedical experiments. Just before undocking, the Progress fired its thrusters to boost the station’s altitude and also make a correction to the station’s orbital inclination. The inclination has a tendency to deteriorate over time and the correction would keep it within the desired range of between 51.62 and 51.68 degrees. The Progress undocked on May 24 and spent the next ten days in orbit before reentering the atmosphere and disintegrating. On May 27, Progress 49 docked with 2,566 kilograms of cargo.

During the first week of June, Padalka and Fincke began preparations for the rescheduled Stage EVA and checked out the Orlan suits. It was delayed again until June 24th to optimize Russian communication coverage and give it a better placement in the crew’s day. Fincke learned that his son was born on June 18th and he took the opportunity to send out thoughts for all servicemen and women who had to miss important milestones while deployed. He was certainly looking forward to the upcoming EVA. 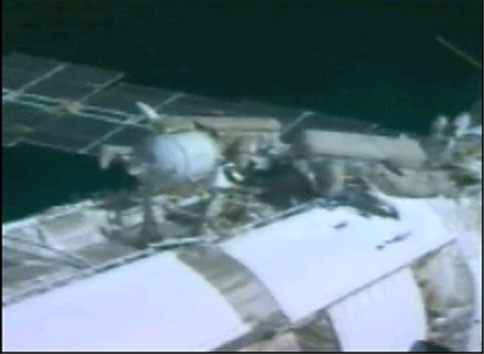 Padalka and Fincke replace a part on the coolant system during one of three EVAs. Image credit Space.com

The EVA’s primary goal was to repair a malfunctioning RPCM used to remotely control the power supply on the International Space Station. It began at 17:56 on June 24, 2004. Unfortunately, the primary oxygen bottle in Finckes Primary Life Support System (PLSS) sprang a leak, so they called it off and the EVA ended after just 14 minutes and 22 seconds. Fincke complimented controllers on the ground for noticing the problem before the leak became dangerous. The EVA was rescheduled for June 30 and troubleshooting on the faulty PLSS revealed a problem with the injector switch.

The second attempt at the EVA began with more promise on June 30, twenty minutes ahead of schedule. Padalka described his surroundings as “dark, but very beautiful.” Fincke rode the Strela crane out to Zarya’s wake with Padalka operating it with a hand crank. Fincke secured it in place and Padalka made his own way along the crane. They both proceeded onwards to the Unity module and Houston controllers guided them from there to work positions on the S-0 ITS. The two crewmen replaced the faulty RPCM and, fifteen minutes afterward, the ground confirmed that the operation was a success. Power was now flowing freely to the affected Control Moment Gyroscope, CMG-2. The crewmen made their way back to the Strela and Padalka used the hand crank to maneuver it back to his stowed position. They also installed two handrails, a contamination monitor that would measure station thruster exhaust, and added end caps to two more handrails. They reentered the Pirs airlock after 5 hours and 40 minutes.

Controllers on the ground performed checks to insure that the CMG-2 was functioning correctly and it was put back into operation to help control the International Space Station’s attitude. The crew spent July 2 getting things back in order after the EVA, and then took a 3-day weekend in honor of American Independence Day.

After the EVA, life returned to normal on the International Space Station. Russian controllers attempted to update their software to allow for support of an ESA-developed Automated Transfer Vehicle that could carry more cargo than a Progress. The attempt was unsuccessful. The crew took care of experiments that included several biomedical studies. They also took part in a fire drill and cleaned the fire alarm equipment after a couple of false alarms.

The international partners held a meeting in Holland on July 23, 2004, for a complete review of progress being made on the International Space Station and discussion of the future. NASA was still attempting to return the Shuttle to flight status and the contract with Russia’s main supplier of Progress and Soyuz vehicles was due to end after the last of the Soyuz vessels was recovered in April 2006. This posed a major hurdle because Russia was demanding payment for use of its Soyuz spacecraft afterwards and NASA was forbidden by the Iran Non-proliferation Act to send money directly to Russia. There was talk of making an exception for support of the International Space Station but it didn’t sound promising. At the end of the talks, there was no real solution to the problem other than getting the Shuttle back into operation.

The end of July saw the departure of Progress 49 and Fincke attempted some soldering experiments in microgravity. They also prepared for a second EVA on August 3. During this EVA, they replaced a material exposure experiment with fresh samples and the Kromka contamination experiment on Zvezda’s exterior, installed two antennae and replaced three laser reflectors with an improved three-dimensional reflector. The CMG system was overloaded during the EVA and, during an attempt to compensate, the ground lost contact with the S-band antennae. Once the crew members left the area, the CMG was able to resume control. They finished by disconnecting a cable on a malfunctioning camear and removing a second material exposure experiment. The EVA ended with a duration of 4 hours and 30 minutes.

August and the beginning of September was a rough one for the legendary launch site in Florida, Cape Canaveral. Hurricane Charley caused $700,000 worth of damage to the Cape in early August and, one month later, Hurricane Francis came through and caused damage to a building that housed two Shuttle ETs and various SRB. Luckily, the shuttle components and three remaining shuttles were not damaged. Hurricane Ivan threatened the area, and then changed course and missed Florida altogether. Fincke reported having caught pictures of Francis a few days before it hit Florida.

Early September also saw the third and final EVA for Expedition 9. On September 3, the crew replaced a flow regulator valve panel and installed three communication antennae on Zvezda to assist with the docking of the European ATV. Fincke photographed the Japanese MPAC/SEEDS experiment. On the exterior of Pirs, the spacewalkers installed covers on the handrails around the airlock hatch to prevent tethers from being tangled up during EVA activity. This EVA ended with a duration of 5 hours and 21 minutes.

As September continued, Padalka made partial repairs to a faulty Elektron unit that was becoming a real headache for both the Russians and the Americans. Tests suggested that the problem might be caused by crystals of potassium hydroxide in the oxygen supply line. The faulty Elektron unit was alarming enough for NASA to publicly admit that they might have to evacuate the ISS if the available oxygen fell below a 45-day supply. The station’s atmosphere was replenished using oxygen carried by Progress M-50 and nitrogen from the tanks on Quest. Fincke handled some maintenance in the Destiny module, replacing a flex hose that had malfunctioned and allowed air to pass between two panes of glass. Later in the month, they began making preparations for their return to Earth.

The Inside of a Soyuz

Mike Fincke shows us the inside of a Soyuz. They’re tiny compared to the Space Shuttle.