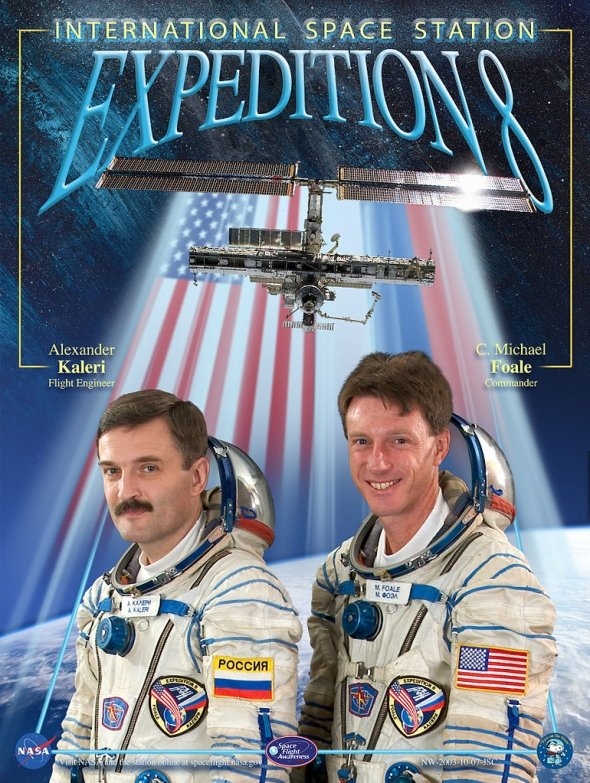 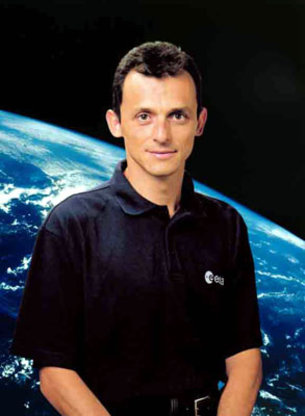 Expedition 8 commander Michael Foale had previously served on the Russian space station Mir and, in an interview before the mission launch, expressed his confidence that his experience and training would help make the mission a success. Flight Engineer Alexander Kaleri had served on Mir’s last crew and commented that, while he regretted that his Mir crew had been the last, he was looking forward to the experience on the International Space Station. Pedro Duque was not an official member of the Expedition 8 crew, but was flying to the space station as part of an arrangement with the Russians to take care of some experiments while the ESA continued to work on the Columbus experiment module. He would return with Expedition 7.

The Soyuz launched on October 18, 2003, and docked on October 20. Some officials, still nervous about the loss of Columbia, expressed concerns about the state of equipment and supplies on the International Space Station and the condition of the Soyuz during launch. The astronauts and cosmonauts quickly assured the public that, while maintenance of sensitive onboard equipment took up a significant amount of time, they weren’t concerned about the station’s condition. Administrator O’Keefe got a little short with the media and American politicians who questioned the international partners’ commitment to safety, stating that if something went seriously wrong, the people on the space station could simply “get aboard the Soyuz, turn down the lights and leave.” In the meantime, the five crewmen went through the usual routine of safety briefings and transferring Pedro Duque’s couch to Soyuz TMA-2.

Pedro Duque jumped right into a package of 24 experiments known as “Cervantes”. He had been working with the engineers on the Columbus module since wrapping up the post-mission work on his first space flight, STS-95 in 1998, and commented before the flight that he was looking forward to working with the European-built Microgravity Science Glovebox. He also commented that there was a long line of experiments waiting for Columbus and this would hopefully give Europe a kick-start on its scientific program.

Duque spent forty hours over the next eight days working on experiments, most of which were sponsored by Spain and included studies of the “space aging” phenomenon, the effects of the space environment on genetics, the nervous system and plant cells, Earth observation studies that included collecting data about lightning-induced phenomena called “sprites”, and the formation of microporous crystals in orbit. Duque also participated in educational programs that included answering questions from elementary school children and used a 3D camera to capture images that could hopefully be used to improve astronaut training.

The experiment package was a success and Pedro Duque returned home with the Expedition 7 crew on October 26. The station gave them one moment of excitement when it rolled suddenly. The cause was a control on the Soyuz that had accidentally been bumped. Zvezda’s thrusters corrected the station’s attitude and the Soyuz returned home without further incident. 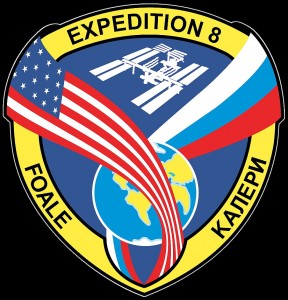 The Expedition 8 crew settled in quickly after the Soyuz’s departure and began work on maintenance and their scientific experiments. Some radiation-monitoring equipment had malfunctioned, and an important exercise machine called a veloergometer also failed. Faole and Kaleri took shelter in shielded parts of the station when radiation from a series of solar storms interacted with Earth’s magnetic field. Officials on the ground were quick to assure the public that the station wouldn’t orbit through the worst of it. On the plus side, the crew got positive ratings in an emergency evacuation drill and Foale got a chance to talk to members of the Skylab 4 crew during celebrations of the 30th anniversary of their launch.

During the week of November 12th, activities included replacing ten smoke detectors, the preliminaries for a renal stone development study, preparations for a Fluid Dynamics Investigation experiment that would study the growth of 3-dimensional cell cultures, and a rehearsal for a Stage EVA planned for February. The rehearsal included a simulation of emergency procedures in which the crew would have to transfer from the station exterior to the Soyuz while still in their Russian-made Orlan EVA suits. Kaleri had a considerable amount of trouble getting through the airlock with his Orlan suit on, even with an assist from Faole, and the attempt was abandoned.

Representatives of the international partners celebrated the fifth anniversary of the launch of the Zarya module on November 20, 2003. Despite officials’ reassurances that the station was still safe, there were signs of deteriorating equipment on some of the older station components that included an unusual noise coming from the treadmill used for exercise. The cause was determined to be a failing gyroscope and the treadmill’s Vibration Isolation System was disabled to compensate.

A loud bang got the crew’s attention on November 26. It was initially believed to be some kind of impact. Faole did not believe that it had punctured the station. He hadn’t even felt any popping in his ears as he had when a collision between Mir and a Progress vehicle caused the loss of some of the atmosphere. He used the robotic arm’s cameras to scan for damage and officials on the ground asked the Pentagon to use a reconnaissance satellite to scan for damage. Nothing alarming was found. The noise was eventually tracked down to a camera mounted on Destiny.

Life went on, and Foale set a new American record for total time in space on December 8, beating out Expedition 4’s Carl Walz. Nine days later, NASA announced four new Expedition crews that were dependent only on the shuttle being back in service before November 15, 2004, when the launch of Expedition 11 was planned. On December 17th, the Expedition 8 crew had a relaxing day and observed the 100th anniversary of the Wright Brothers’ first powered flight. They talked to some schoolchildren at the Wright Brothers’ Memorial in Kitty Hawk.

After the holidays, the crew spent a few days tracking down a slow leak. The Elektron, which helped maintain the station’s atmosphere, also suffered a series of failures and engineers on the ground began planning for a replacement. President George W. Bush addressed the nation on January 14, 2003, outlining his vision of future space exploration. He expressed the confidence that the shuttle would return to service and would focus on building and maintaining the space station. He also envisioned a Crew Exploration Vehicle as a possible replacement for the shuttle and a return to the Moon. He called for Congress to increase NASA’s budget. The projected costs were in the tens of billions of dollars and NASA officials tried to do some reshuffling to make up the cost.

In the week before February 26, the crew began preparations for the only EVA planned for Expedition 8. They ran through one more trial run of transferring from Pirs to the Soyuz, this time successfully. On the 26th, they switched the station over to an automatic mode and made their way through the Pirs airlock. The station was technically unoccupied. Most of their work took place on the Zvezda module. They replaced a sample for a Japanese experiment that measured micrometeoroid impacts and installed a Russian “Matryoshka” experiment on exterior handrails to study the effects of radiation on simulated human tissues.

Kaleri reported difficulties with his suit’s cooling system that caused a rise in temperature in the suit and the formation of water droplets on his visor. Engineers in the Russian control center concurred and Kaleri returned to the airlock early. Foale replaced a cassette of long-duration exposure material samples before returning to the airlock himself. He inspected Kaleri’s suit and discovered a kink on one of the cooling water tubes. He straightened it out, solving the problem.

The International Space Station had survived the brief unoccupied period. The crew’s duties were light for the week after the EVA and they occupied much of their time with experiments and housekeeping. Progress M1-11 used its thrusters to boost the station’s altitude. 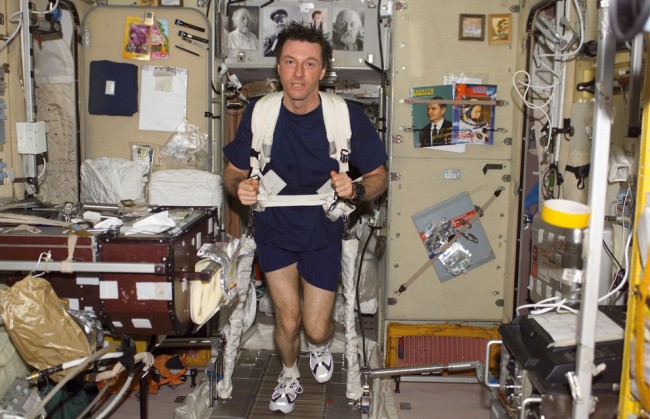 As the mission began to wind down, Kaleri did some troubleshooting on the still-troublesome Elektron oxygen generator. Oxygen was transferred from the Progress to the station to supplement the atmosphere and two oxygen candles were burned to help generate more. In the meantime, Foale wrapped up American experiments that included the FOOT project, which studied the use of legs in microgravity. He also set up the ESA’s HEAT experiment in preparation of Holland astronaut Andre Kuipers. This experiment would test a new method of piping heat away from sensitive electronics.

There were still a few worries about the Soyuz they planned to return home in. Kaleri replaced fans that helped control humidity levels and ventilation in the cabin and a test of the thrusters revealed a helium leak. Russian controllers tested the helium system still further and decided that it wouldn’t be a serious problem.