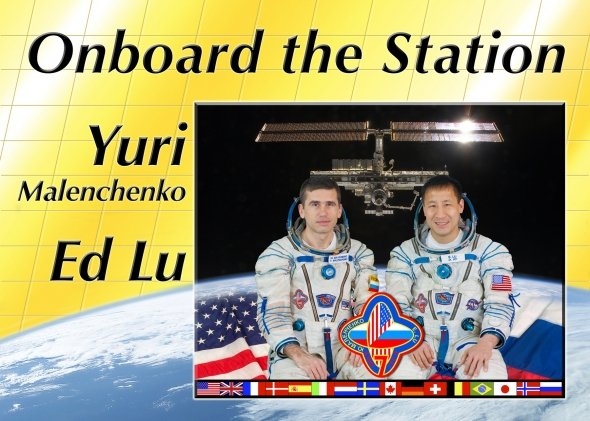 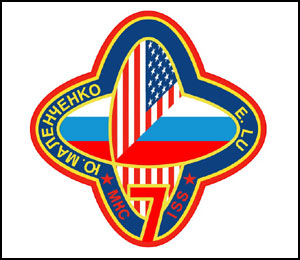 Yuri Malenchenko and Edward Lu launched in Soyuz TMA-2 on April 25, 2003, and docked on the Zarya’s nadir docking port on April 28th. During the approach, Budarin adjusted the International Space Station’s attitude to take pictures of the approaching Soyuz. NASA was considering a similar procedure for future Shuttle dockings to provide pictures for analysis on the ground. The hatches were opened about half an hour after docking. During a press conference after the welcoming ceremony, Pettit assured reporters that they had trained for return in the Soyuz and weren’t especially worried about it.

The Expedition 7 crew jumped right into work with familiarization training on the robotic arm and troubleshooting a problem with the station’s computer system. On May 3rd, the Expedition 6 crew formally handed over command to Expedition 7 and returned home. Difficulty with Soyuz TMA-1’s guidance computer caused them to land short of their goal and lose contact with Russian controllers and Pettit’s shoulder was injured in the process, but they were otherwise fine and Pettit was more impressed by the return of familiar Earth-based sights and sounds. NASA Administrator O’Keefe was scathing about the Russians’ handling of the communications malfunction. He was more complimentary of the way the Expedition 6 team was able to pull together and keep going after the loss of STS-107.

Meanwhile, Lu and Malenchenko spent the next few days settling into the International Space Station and performing maintenance. Drills included fire and practice donning EVA suits without help from a third crew member. There were no EVAs planned for Expedition 7 but it was a possibility if there was an emergency. Malenchenko, the Expedition commander, expressed the hope that the station partners would be able to pick up the pieces after losing the Columbia and Expedition 7 would still be able to turn out good science despite the loss of Shuttle flights and the elimination of one crew member.

Life pretty much continued as normal on the International Space Station. Progress M1-10 came and went, delivering consumables and equipment and disintegrating in the atmosphere filled with rubbish. Lu focused on experiments that included a study of magnetorheliological fluids when exposed to magnetic fields. He also celebrated his 40th birthday on the International Space Station and penned a series of letters detailing life and work on the space station titled “Greetings, Earthlings”. 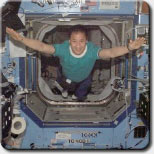 Greetings Earthlings: Ed Lu’s Letters from Space
Ed Lu talks about a variety of topics ranging from what it’s like to launch on a Soyuz to making food in space. Worth checking out if you have any unanswered questions about what it’s like to be on the International Space Station. 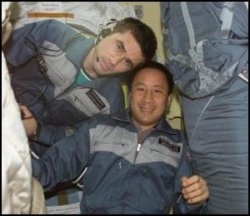 The crew of Expedition 7 poses for a picture. Image credit NASA

Malenchenko stayed busy with Russian experiments that included medical studies and particles in a vacuum chamber that had been excited by radio frequencies. On August 10, he became one of only a few space fliers to have a wedding during a mission when he married an American of Russian descent named Eketrina Dimitriev. Lu had brought along a keyboard with his personal kit and played the Wedding March for the ceremony. It was an unauthorized use of Russian facilities that could have gotten Malenchenko in trouble, though the Russians decided not to pursue the matter.

Maintenance included systems checks in the Pirs module. A hiccup in the onboard computer system caused the station to shut down nonessential systems and the crew worked with controllers to troubleshoot the problem. It turned out that the computers had failed to recognize some thermal system loops in the Russian part of the station. Lu conferred with Expedition 6 crew member Don Pettit to track down a cable needed for the PFMI experiment, which was meant to study bubble formation in melted plastic. Progress M-48 delivered equipment and experiments that would be used by Expedition 8 and ESA astronaut Pedro Duque during his brief stay on the space station. During the beginning of October, Expedition 7 began preparations to turn things over to Expedition 8.

There was still some talk on the ground about the possibility of abandoning the space station until the shuttle was back up and flying. The committee investigating the loss of STS-107 had been scathing of NASA management in their final report and it was obvious that some changes would have to be made. Some people in NASA floated the idea of using the International Space Station as a safe haven for any shuttles that had been damaged during launch. The Russians were still having budget difficulties and floated the idea of having more paying space tourists on their Soyuz flights. Lu stated in a press conference that abandoning the space station would have been a bad idea and having a crew on board would help deal with unforeseen events that might cripple the station otherwise.

Earth has had a few close shaves involving asteroids lately. Ed Lu intends to do something about it by launching a telescope into solar orbit to track asteroids. Why? Because every proposed plan for deflecting asteroids relies on early detection.