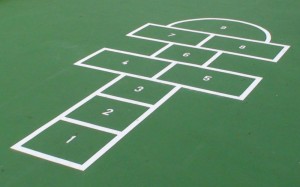 Hopscotch is a classic playground game that has been played by children at recess for decades. There is a variety of possible layouts of the hopscotch court, but it is usually recognizable as an arrangement of rectangles or combination of rectangles and triangles. The court is usually drawn with chalk or painted onto the pavement. Children take turns hopping through the course, usually skipping the square that a marker has been tossed into. In most games, the first person to complete a turn without losing their balance, stepping on a line or missing a square wins the game.

The History of Hopscotch 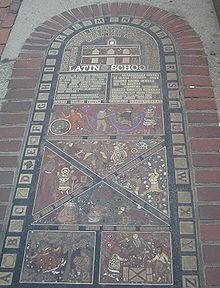 The exact origin of hopscotch is a favorite topic of debate for historians who study children’s entertainment. There is a myth that recognizable versions of hopscotch were played by ancient Romans or Chinese. In the late 17th century, an English manuscript called The Book of Games documented a game called “Scotch-Hoppers.” It was apparently already popular with schoolboys and other names or variations of Scotch-Hoppers included Hop-Score, Peevers and Pabats.

Versions of hopscotch may have been around for centuries and are still played around the world. The French marelle ronde is played on a spiral course in which players hop on one foot towards the center and back outwards again. In India, Kith-Kith is very similar to Western versions and is usually played by girls.

The Guiness Book of World Records has an entry for fastest hopscotch game, which is currently held by Ashrita Furman at one minute, eight seconds. Furman currently holds more than one hundred Guiness records and credits meditation techniques for his success.

Some people believe that hopscotch was brought to England by the Roman army. The Romans may have used a hopscotch-like running course to improve their footwork. Some children saw and copied the soldiers, and it evolved from there to the familiar game.

The “scotch” in hopscotch refers to the lines used to draw the course.

There are societies that attach spiritual meaning to Hopscotch. The German name for it translates as “Heaven and Hell.” The French Canadians have a superstition that, if you waver at hopscotch, it represents an uncertain soul.