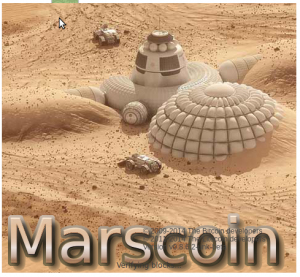 I remember the first time I heard about this little cryptocurrency called Marscoin. It was created by a few future Martians for a future Martian economy. My honest first reaction was, “Okay, this may be jumping the gun a little bit, but at least somebody’s thinking ahead.” Like most cryptocurrencies, it doesn’t rely on banks or governments and, as I archly pointed out to one dreamer who protested the idea of having a currency already, we don’t even have to use it if we don’t want to. While doing that, I privately thought it was neat that you could so easily create a currency that doesn’t depend on a socioeconomic infrastructure that doesn’t exist yet. It’s not like we’ll be able to walk into the nearest bank and withdraw some cash when we reach the Martian surface.

This is what really sucked me into the whole world of cryptocurrencies. Bitcoin, Litecoin, Darkcoin, and coins of just about every color you can think of. If you own a business, you could easily complement your branding just by choosing which cryptocurrencies you’re going to accept in your online retail site.

The problem is that sites like Coinpayments don’t work with every single cryptocurrency you could name. So you have two options. You could grease a cryptocurrency developer’s palm to create a native payment processor for your retail site. Or you could stumble across an online marketplace like the MarineCoin-based Bidcoind, which works with a lot of altcoins, including ones I’ve never even heard of. And it includes Marscoin.

Don’t get me wrong, I like Coinpayments enough to use its plugin in my WordPress store. The problem is that nobody is actually using many small but promising altcoins. One valiant but doomed attempt to create a marketplace where digital artists could sell their work for Marscoin has already tanked. Fortunately, I have a few contacts in the cryptocurrency world and a friend of mine who is involved in a few cryptocurrency-related development projects likes the idea of a bigger Marscoin marketplace that would go way beyond selling digital art.

I could go a lot of ways here. The Bitcointalk community seemed to like the idea of creating a jobs board that would be proactive about eliminating the scams and spam that riddle a lot of the current sites that claim to connect employers willing to pay in Bitcoin with potential employees. I’ve gone back and forth with people on Facebook about creating a site that helps people who might have been left behind by our current economic systems bring their wares to market more easily and they agreed that cryptocurrencies can be a huge help in this department once I explained the concept to them. It’s possible that I’ll end up working full-time running two or three online businesses.

So you probably think I’m crazy right now. But it shouldn’t be hard to bootstrap a new Bitcoin business by using cryptocurrency-based services that already exist.

I don’t fool myself that it’s really going to be as simple as an idea that I can write about in a blog entry. However, it’s doable when you consider that, right this minute, cryptocurrencies are at the point that the Internet was in 1995. Geeks take it seriously and the rest of the world laughs until the digital ecosystem reaches the point where just about every important financial decision you make involves a connection to a server somewhere out on the Internet at some point. Every holiday season, I think that those news stories about somebody being trampled over a television are so completely unnecessary when it’s very easy to just stay home and take advantage of Cyber Monday deals. It’s going to reach the point where those Cyber Monday deals have a good chance of involving one altcoin or another and now is a good time to get in on the action.

Why consider supposedly minor altcoins when opening a new business anyway? Well, it’s a matter of having choices. The Bitcoin infrastructure is the best developed, but there’s a few serious competitors. The NXT Freemarket could rock the boat. A lot of people don’t seem to notice that you can use Dogecoin to buy gift cards on eGifter. I’m testing some ideas by creating a listing for a book I wrote on Bidcoind with Marscoin as the payment option (Here it is!). It’s possible that altcoins like Marscoin and Earthcoin could become huge if somebody would only give them a chance. So stay tuned, and a lot can happen if the right kind of people get behind their favorite cryptocurrencies.