You know Grumpy Cat as that cute little feline with the grumpy look on her face. She’s rocked the Internet with proof that cats with dwarfism deserve to be loved too, even when they look like they’re in a nasty mood most of the time. What could we learn from this cute little girl? 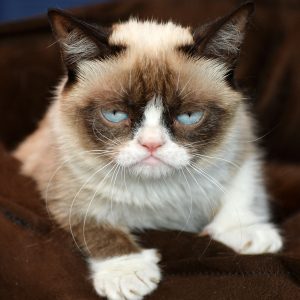 It’s okay to be in a bad mood. Grumpy Cat tells it like it is when she tells the people who are making her grumpy to get lost. She knows that certain people and situations are just enough to put anybody in a bad mood and you can survive the occasional bad day if you just acknowledge those things that are making you grumpy and deal with them up front. Even when you’re not Grumpy Cat, it can become impossible to force that good cheer on those days when the customer isn’t necessarily right, an annoying co-worker is getting on your last nerve, or the kids picked a bad day to squabble in the back seat of your car. That’s all right if you can be like Grumpy Cat and own up to the fact that you’re not in the mood for it right now.

It’s okay to say no. Grumpy Cat knows that a good, “No,” can be very therapeutic, especially when you’ve already got four or five projects going and can’t take on “just one more thing” because you need to get your scheduled catnap in. “No,” you can’t get involved in somebody else’s personal drama right now. “No,” it’s not your problem if a co-worker gets himself fired because he’s too lazy to do the job. “No,” you are not going to skip your catnap simply because somebody else insists on giving you an ear scratch!

It’s okay to be a little bit different. Grumpy Cat, whose real name is Tardar Sauce, is a cat with a form of dwarfism that gives her that adorably grumpy look. The downside is that she has a deformity in her back legs that gives her a slightly “wobbly” walk. Grumpy Cat has reportedly donated some of the money she’s earned to help animals in need, including animal shelter pets who might have been dumped by previous owners due to health problems or birth defects like Grumpy’s and need a loving home.

You can get away with telling it like it is if you’re doing it right. Grumpy Cat makes us laugh because she says exactly what we might have all thought at one time or another about the people we have to deal with every day and does it without being a blowhard or a know-it-all. She’s built her online persona by being a grumpy little girl who can call it like she sees it in a way that offends no one.

You can be successful just by being what you are. It’s kinda hard to argue with a cat who has her own Christmas special, a few best-selling books and a plushie and she did it all just by being herself. At about three and a half years old, it’s possible that Tardar Sauce doesn’t recall a time when she wasn’t famous, though she reportedly just acts like a normal cat most of the time. She’s earned quite a bit of catnip just by being the most famous cat with dwarfism ever, though there is some dispute over whether she’s really worth $100 million. For a cat who can basically sleep through her own book signing and look unimpressed by the crowds when she does wake up long enough for a quick picture, that’s pretty good.