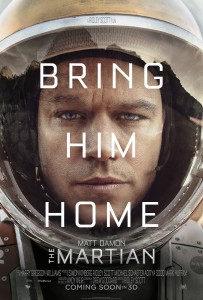 Bring Him Home Movie Poster for Andy Weir’s The Martian

So I just went to see “The Martian” in 3D today. It’s performing respectively, claiming the top slot during its opening weekend with earnings of $55 million. The movie has topped $230 million worldwide since its release and the book it’s based on is selling like hotcakes on Amazon, which has to be a real delight for author Andy Weir considering the amount of time he spent doing the research before he ever thought of writing the story. I like to tell people that they should read the book first and, in this case, it’s going to be a context thing simply due to the high science content. If you’re already fairly familiar with proposed plans for manned Mars missions like Robert Zubrin’s “Mars Direct,” you could pretty much geek out to this movie.

Some Things You Need To Know:

One Way To Make Rocket Fuel On Mars

So, what did I think of it? It’s a good movie for people who go into the theater ready to, as Watney put it, “science the shit out of this.” There’s a couple of explosions, but not because of any kind of alien invasion or big space battle that seem to be the norm for science fiction movies. The one happened because Watney forgot that any chemical reaction involving rocket fuel is likely to be explosive, and the other happened because the airlock had outlasted the lifespan it was designed for and the materials just wore out.

It’s good, fast-paced storytelling that highlight many important aspects of space exploration as well as hinting at the current prevailing culture at NASA from the senior officials who don’t like to take risks with people’s lives even when it’s necessary to the astrodynamics nerd who might seem to be snubbing his bosses but that’s only because he’s busy coming up with a brilliant solution to the problem. The courageous ones are the ones who are actually up to their elbows in every aspect of actual space flight, from the flight director who risks his job to get the solution to saving Watney up to the Hermes crew to the astronauts who decide to go back for the one they left behind even though it means mutiny. Watney might use the F-word rather frequently and, sure, he gets mad at times, but he mostly just sucks it up and gets the job done even when things are exploding in his face. The PG-13 rating is partly due to the profanity, but that’s pretty realistic and forgivable when (context again) real life astronauts have let the occasional swearword over a live feed before, such as during Apollo 10 when the lunar module went berserk during the “dress rehearsal” for the first lunar landing.

Basically, don’t let the scientific nitpicking turn you off. If you’ve wished that Hollywood would come up with more original science fiction movies or want to see real, live Mars missions in your lifetime, vote with your money and go see this movie, in 3D if possible because the landscapes are plain awesome. And, BTW, author Andy Weir is a pretty cool dude.

My Interview with Andy Weir

“The Martian” on Amazon