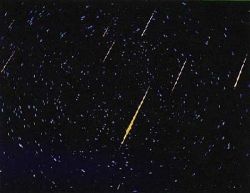 This one’s for the sky watchers: Meteor Day, June 30th. Why this day? Well, if you happen to be looking up at a clear night sky on June 30th, you might catch some of the Draconid meteor shower coming from the Big Dipper. The good news is that, if you can’t get out of the city for some good meteor watching on this night, you don’t need to be discouraged. There are several meteor showers going on throughout the year. I’ve seen some pretty good meteor showers just through the window of my car while traveling between cities.

What Are Meteors, Anyway?

And Are They Scary? 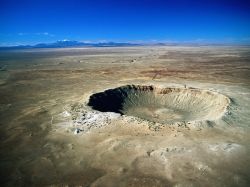 Meteors are small objects that streak across the sky. They are made up of mostly rock and are usually just clumps of dust or chips off celestial objects like asteroids. Most are no bigger than a peanut and burn up in our atmosphere. Some are bigger and the really spectacular meteors can be as big as a basketball. If they are big enough to survive the trip through Earth’s atmosphere and land on the surface, they become known as meteorites. Potential meteors that haven’t fallen into our atmosphere yet are called meteoroids.

Usually, meteors aren’t scary at all and just make an interesting show for skywatchers and astronomy enthusiasts. There have been reports of meteorites falling through people’s ceilings, damaging cars or otherwise causing property damage, but this is not very common. Very rarely, a meteor is big enough to cause serious damage or leave a large crater like this one in Arizona and it is believed that a very big meteor caused the extinction of the dinosaurs. For this reason, forward-looking individuals are interested in creating a defense system against large objects that might be on a collision course with Earth.

Ed Lu talks about the most important factor in defending Earth against large meteroids that might threaten Earth: early detection. His non-profit B612 Foundation aims to put a large telescope in solar orbit to detect potentially dangerous meteoroids.

When Are Meteor Showers