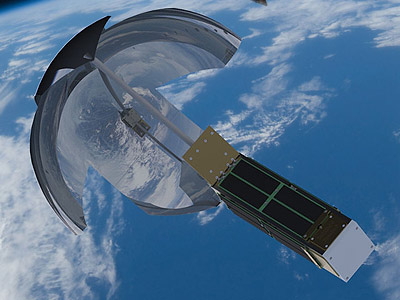 NASA is set to enhance its ability to track and predict re-entry location by releasing Technical and Educational Satellite 5 (TechEdSat 5) from the International Space Station at 12:20 p.m. C.T. on Monday. TechEdSat 5 is a CubeSat that represents a joint project between San Jose State University (SJSU) and the University of Idaho and is overseen by NASA’s Ames Research Center. Stated goals of TechEdSat 5 include:

This 3.5U CubeSat contains an enlarged bus and a modulating exo-brake that can change its surface area, allowing for a more controlled entry into Earth’s atmosphere. This is a departure from traditional braking methods used for reentry, which requires the use of retro-rockets. Rocket-related hardware is normally not stored on the International Space Station.

It also contains a Digi XBee® 802.15.4 module, which will demonstrate out-of-the-box RF frequency communications by taking over internal communications between CubeSat components from the typical wired connections and transmitting important orbital data within the satellite, including the satellite’s translational acceleration and angular rate, magnetic field, atmospheric pressure, temperature, and strain. This data will then be used in the design of future satellites.

“NASA is continually expanding the boundaries of creating and applying innovative technologies and we’re thrilled to be part of these efforts,” Rob Faludi, chief innovation officer for Digi International, said of the inclusion of its Digin XBee module on the CubeSat.

“NASA is looking at wireless sensor technology as another tool to help understand vehicle dynamics, heat-shield or ablator performance, and fluid mechanics” said Marcus S. Murbach, principal investigator, at Ames. “Of particular interest is the application of wireless sensor technology to a controllable Exo-Brake – to which data can be compared to entry systems models of drag-based de-orbit.”

TechEdSat 5 is likely to burn up in the atmosphere during this test, but later TechEdSat missions may be equipped with wingsail style parachutes that will continue the effort to bring perishable experiment samples quickly back from the ISS.

CubeSats and Small Satellites on eBay