The National Oceanic and Atmospheric Administration (NOAA) released the first images from two Earth and solar weather-monitoring space instruments aboard the GOES-16 satellite, which launched in November. Today’s images from the Geostationary Lightning Mapper (GLM) are a first for continuous lightning tracking in geostationary orbit, 22,300 miles above the earth. Last week NOAA also released the first images from the Solar Ultraviolet Imager (SUVI), which gives faster warning for solar storms. Both GLM and SUVI were designed and built at Lockheed Martin’s Advanced Technology Center in Palo Alto, California.

GOES-16 is the first of a series of four next-generation satellites built by Lockheed Martin, each of which will host a GLM and SUVI instrument. The GOES-R program—as the series is called—is a collaborative mission between NOAA and NASA. 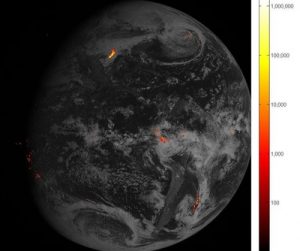 “GLM is a first-of-a-kind capability for lightning monitoring at geostationary orbit,” said Jeff Vanden Beukel, Lockheed Martin GOES-R instruments director. “Seeing individual lightning strikes from 22,300 miles away is an incredible feat, plus we’re monitoring cloud-to-cloud lightning for the first time. All this will give forecasters better data to give people on the ground, at sea and in the air faster severe weather warning.”

The GLM is already returning image results like the one at left, which provides data to meteorologists who are interested in improving the quality of weather data. Expect weather reports that have been refined by data from the GLM to reach the news or weather channel that you watch for the daily forecast soon. 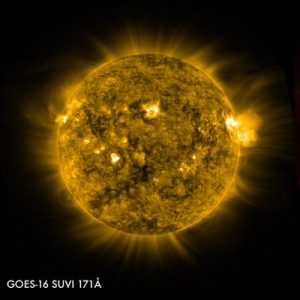 The Solar Ultraviolet Imager, built by Lockheed Martin, now delivers the fastest warning time of solar storms, which can knock out satellites in orbit and power grids on Earth. (Image courtesy of NOAA)

“We built SUVI so it can deliver solar storm warning faster than any other space instrument, plus an upgrade in resolution over current GOES systems,” said Jeff Vanden Beukel, Lockheed Martin GOES-R instruments director. “Solar storms can cause blackouts here on Earth and shut down satellites in orbit. Faster warning lets us protect these assets before disaster strikes.”

Solar storms could cause a worldwide meltdown in the technologies that human society currently depends on, including satellites and power grids. Instrument like SUVI can help prevent the economic chaos that could be caused by a solar storm if corporations and militaries that own satellites are willing to act fast on the data provided by SUVI.

Headquartered in Bethesda, Maryland, Lockheed Martin is a global security and aerospace company that employs approximately 97,000 people worldwide and is principally engaged in the research, design, development, manufacture, integration and sustainment of advanced technology systems, products and services.