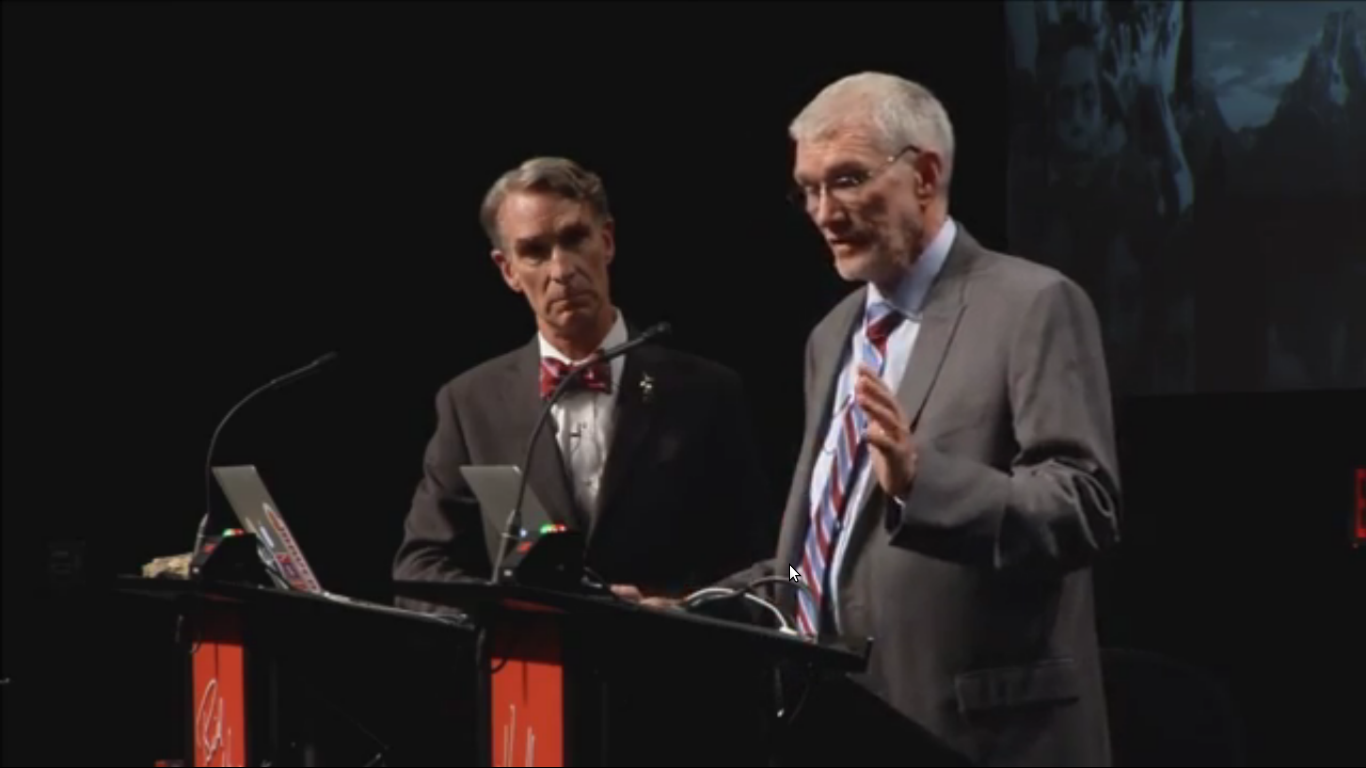 So I am about to watch the Nye vs. Ham Debate. Here goes nothing… (Headphones are now on.) Something to be said for the epic sounding orchestra music that preludes the debate. Less than a minute to go.

Cartoon message from the Creation Museum. The usual. And the MC tells a Super Bowl joke while introducing Ken Ham and Bill Nye. Looks like a decent crowd. Bill Nye has aged a bit since I used to watch his “Science Guy” show but still looks good. And Ham is apparently no slacker with a degree in applied biology.

And right away Ham calls upon one of his friends, Stuart Nurgess who is an inventor, to support his theory. He certainly doesn’t deny that science has done a lot of good things. But he calls evolution and naturalism a religion. He doesn’t get into observable evidence very much.

So. Nye’s turn. First he tells a story about his bow tie, and then he ties it into tonight’s debate. Does the evolution story or the creation story hold up to inspection? And, yes, he does mention fossils in the Grand Canyon and how they do not seem to support Noah’s Great Flood.

Now Ham has a 30-minute presentation to give. He introduces the inventor of the MRI scanner. If he keeps just throwing up examples of scientists and inventors instead of focusing on real scientific evidence, he’s not going to get far.

And now he’s questioning whether logic can even exist in a Godless universe. It is as if math doesn’t even exist in universe with a pure evolution model. And now he’s talking about how it’s impossible to go back in time to find out what really happened to lay down the minerals in the Grand Canyon. It’s like he expects scientists to have a time machine. If you have a piece of uranium, you can measure its half life over and over and not get a different figure. You could find a rock that has both uranium and the substances that it decays into and use that half life figure to calculate “backwards” to see how long the uranium has been in that particular rock. So the idea that you can’t use geology to draw conclusions about the past does not really hold water.

And now he held up an old biology textbook talking about how there are “five races” of man with Caucasians on top of the heap. I would say that says more about how both society and scientific theories can evolve than it does about whether the evolution model is valid.

And now he’s pulling things out of the Bible. He didn’t get too much into the evidence of anything like the Garden of Eden or even whether the Tower of Babel actually existed. And of course the truly good science textbooks are ignoring the supernatural, simply because the “supernatural” by definition can’t be easily measured with a yardstick or a voltage meter or much of anything else.

Bill Nye’s turn. And he does have a fossil! He’s talking about how limestone is actually a fossil and how could the layer of limestone that he is standing on right now could have formed in only a few thousand years. There are trees that are 6,800 years old and even one, “Old Tiko,” that is 9,800 years old! Neither does geology or the fossil record support a Great Flood. There’s no kangaroo fossils in the Middle East like you would expect if every single type of animal was on the Ark. He does some math to show that it would be impractical for millions of types of animals to evolve from only 7,000 in the short amount of time that Creationism gives. His point is that there’s just no way that there could have been a worldwide flood 4,000 years ago.

He questions Noah’s boat building skills. If skilled craftsmen can’t get a wooden boat to go across the ocean, Noah shouldn’t have been able to do any better, especially when it comes to supporting things like elephants on a wooden boat.

Funny part is, Bill Nye is the one that brings up gaps in the fossil record. If you have a gap between fish and lizards, there’s gotta be a type of fossil that we haven’t found yet. And, usually, they find a fossil with elements of both. Even sexuality is an evolutionary trait in fish that cuts down on parasites.

And now he’s talking about evidence for the Big Bang. Stars are still moving away from each other from the energy involved in the Big Bang. And he ended by asking how things like Arctic ice, trees and rocks could be older than 6,000 years if the Earth is only that old.

So Ham says a lot about “historical science” and comments that radioactive dating can be unreliable because isotopes in the past could have decayed at a different rate than it does now! Does uranium arbitrary decide to decay at one rate in this century and a little bit faster the next?

And Bill Nye absolutely destroys the idea that you can’t observe the past simply by using the speed of light. When you look at a star that is 6,000 light-years away, you’re looking at light that left the star 6,000 Earth years ago. He even made a joke about people in the back of the auditorium looking a little younger than the people in the front. He made a good point about trusting words in a book that is a few millennia old over the world we can observe around us.

So Ham basically wants scientists to have a time machine so they can go back and see what actually happened. Bill Nye has real science on his side. At the end, Ham made jokes about how “there is a book out there” that refers to all the questions brought up, but barely brought up any outside scientific evidence that supported creationists. I was writing this while watching the debate, so it may lack my usual deft finish. But it’s good to see that both pretty well kept their cool during the whole thing. So I say that Bill Nye took Ken Ham apart in this debate.

Learn More About The Evolution vs. Creation Debate