First off, let me just say congrats to the ESA for pulling off something that nobody’s ever done before. Rosetta has rendezvoused with a comet and dispatched Philae to land on it. I hope they get a lot of good science out of that and we’ve already gotten some neat pictures. At a cost of only 3.50 Euros per European, this is one case where I can’t argue with where people’s tax dollars are going. That’s less than half the cost of a typical movie ticket. So I posted this on Facebook just to give people some perspective about the cost of space travel: 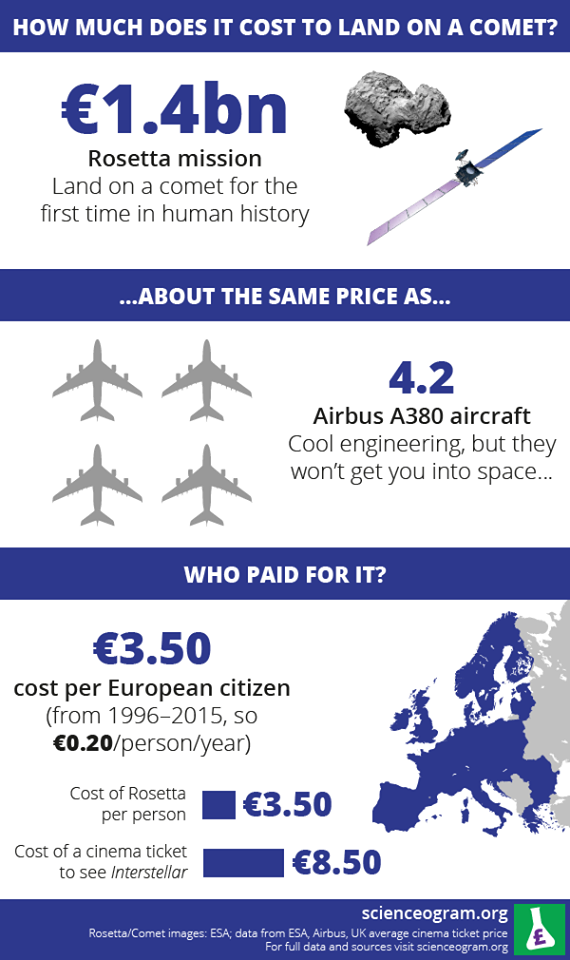 Of course, I promptly got what I thought was a snippy comment about waste of tax dollars. I won’t say who it was or even exactly what he said because I’m sure he would rather be anonymous in this case, but he seemed to imply that space exploration is not something that the government should be funding. So of course I bit back about how programs like this one are keeping engineers and scientists off the welfare line and, if he didn’t like it, he could let his government know and they might be understanding about his obvious lack of sympathy for the kind of people who make our highly technological society possible.

He did backtrack a little bit. He claims to have donated $200 to space projects and programs this year. He just doesn’t think that people should be forced to pay for this kind of thing if they don’t want to. I do get that when there are so many welfare rats with five kids who are riding on other people’s tax dollars and none of them did anything to earn the money I pay in taxes. I just think that sometimes people need to be reminded that scientists and engineers are people, too, and need to earn a regular paycheck just like the rest of us if they don’t want people complaining about them being the welfare rats. The government and its contractors hire a lot of them simply because nobody else is going to create space rockets that actually work, design bridges that won’t fall down, and explain what really causes volcanic eruptions in a way that doesn’t involve angry goddesses that burp.

Wouldn’t Microsoft and Apple hire some of the engineers? Sure they would, but there’s only so many science and engineering jobs in the private sector to go around and corporations are going to look out for their bottom line. Not too many of them are going to hire people like Carl Sagan or Stephen Hawking because they aren’t going to create the next hot gadget. So they go teach at universities, look into research grants and write several books to pay the bills.

It would sure be convenient if you could crowdsource the funding of pure science and engineering efforts and wean it off of the government dole, right? That won’t be easy, but some people are actually trying. A Canadian outfit called Northern Light is currently raising funds to send a rover to Mars. Project Blackmoon wants to literally send a cryptocurrency called Blackcoin to the Moon. The Sentinel Mission is currently raising funds to put an asteroid-hunting telescope into solar orbit. The Mars crowd is gaining steam with efforts like Mars One and Inspiration Mars. Organizations like the Space Settlement Network think that they can completely decentralize the colonization of space to make it more accessible to people who aren’t on the government payroll. If you’ve gotten sick of signing worthless petitions that your government never pays attention to, this could be your chance to actually contribute to the private space effort even if it means getting your hands dirty and taking a few risks.

You could argue that most people just won’t care, and one person did in the same Facebook thread. Most people will be too interested in catching the next episode of American Idol or dumping cash on “alternative” health products that aren’t scientifically proven to work to send so much as a penny to big science and engineering projects. I see all those lame ads for weight loss products and the likes of Viagra because the entities behind them know those ads work. Rosetta might have never gotten off the ground if the ESA had to rely on private donations. This is another case where Interstellar got it right. Most people are just too worried about getting through this day and the next to think much about those big dreams they used to have when they were children.

I look for the Coopers of this world who aren’t afraid to buck the system so they can actually get off this old planet. They’re going to be a minority, but they exist. Cooper is a pilot and, although the movie opens with a bad dream he had about an airplane crash, he still isn’t satisfied with a sedate life on a farm. When Cooper had his chance, he didn’t hesitate. He joined NASA knowing that it was the incredibly unpopular thing to do and it meant leaving behind the people he loved. (Loved the accent, BTW. Who’s the hottest pilot you’ll ever see?) This is the kind of person who is going to colonize Mars, and I don’t necessarily mean hotshot pilots. These are the people who think we can do better than grubbing in the dirt and are willing to move beyond the family farm to do something about it.

This isn’t any movie. This is the real world where we could get creamed by an asteroid or wipe ourselves out with nuclear war. In the case of the Rosetta probe, your “fair share” of the effort was 3.50 Euros if you live in Europe. That’s pretty affordable for a normal European. You could easily take the Libertarian tack that, if you want it badly enough, you should be the one to pay for it and, anyway, the people who expect the government to solve all their problems are a bunch of losers. If it comes down to a case of who should pay for it, you might talk to Elon Musk, who thinks he can get the cost of colonizing Mars down to $500,000 a person if he gets enough early adopters on board. To put that in perspective, you can buy this 258-acre resort land for the Bitcoin equivalent of $8,990,000 or you could save up that money so that your family can emigrate to Mars someday. If you picture some dude building a rocket on his farm while the government tries to shut him down, you’re watching all the right movies (Astronaut Farmer, I believe). Rely on the government? Maybe not, when you can’t count on them to stick with any kind of program for more than a couple of election cycles or create a government-funded space agency who won’t turn the whole thing into a bureaucratic nightmare. Just don’t complain to me about 3.50 Euros spent on a real-life space mission when you probably spent more than twice that to go see Interstellar.