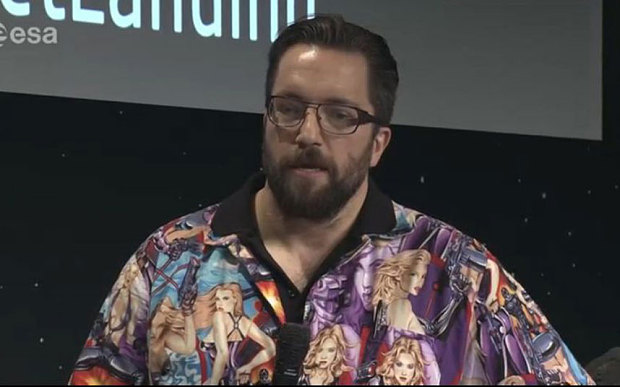 The kind of scientists and engineers who can land a probe on a comet are obviously very smart people. They would practically have to be pretty patient, too, considering it took Rosetta ten years to reach Comet 67P. One thing they aren’t known for, though, is fashion sense. The common image is the nerdy engineer with square glasses and a plain button-down shirt with a pocket protector. Over the past day or so, though, we saw something entirely different: Dr. Matt Taylor giving us a status update in what looked like a shirt that would be more suitable for a vacation in Hawaii at first glance. Look closer, and you notice that the shirt design includes women with guns and sexy outfits.

What’s up with that, right? My first reaction was that he was so excited about the fact that he was about to make history by sending the lander named Philae hurtling towards a comet that he didn’t think much about what he was going to wear today. He must have just grabbed the first thing he saw in his closet. This was buffered by later learning that the shirt was a birthday gift from a friend who just happened to be a woman. He must not have thought of the implications of wearing it.

Of course, the social media world saw it differently. Dr. Taylor’s major accomplishment of landing a probe on a comet for the first time ever got drowned out by what the Twitterverse was calling a “sexist” shirt. WTF, right? I’ve been to art museums with statues that would likely have been arrested for indecent exposure if they had been human and nobody was making a scene about sexism because, well, it’s art. The women on this guy’s shirt weren’t even completely nude – no nipples, no buttocks, not even a belly button in sight. They would not have been very out of place in a James Bond movie.

This is yet another case of Internet users blowing up about entirely the wrong things. One scientist wore one shirt on one day that would have been the best day of his life if people would have just left him alone about what he chose to wear. I’m sure his lady friend wouldn’t have given him the shirt if she would have been bugged about him wearing it. Update: Word on the street is that this particular shirt has sold out on her website.

Feminists should get their priorities straight. Little girls in the Middle East are being kidnapped and forcibly married off to the friends of their kidnappers. Families sell their adolescent girls to pimps in parts of the developing world. Miley Cyrus uses a dance move called “twerking” on national television and calls it art when really all it does is encourage the idea of women as sexual objects along with losing her all the Hannah Montana fans who recognize it for what it is. If you’re a real feminist, you would want to take care of these issues before you worry about a stupid shirt.

It’s kinda sad to see someone cry, whether that person is a man or a woman. I’m not a huge fan of people who are over-the-top emotional. Overdo it, and I’m going to start thinking you’re some kind of attention-seeking drama queen or king. However, I sympathized with Dr. Taylor when he broke down in tears while apologizing for his fashion faux pas. This is somebody who should have been riding the wave of a victory in the space exploration world after landing something on a comet for the first time ever, and instead he gets lambasted over a stupid shirt. How unfair is that?