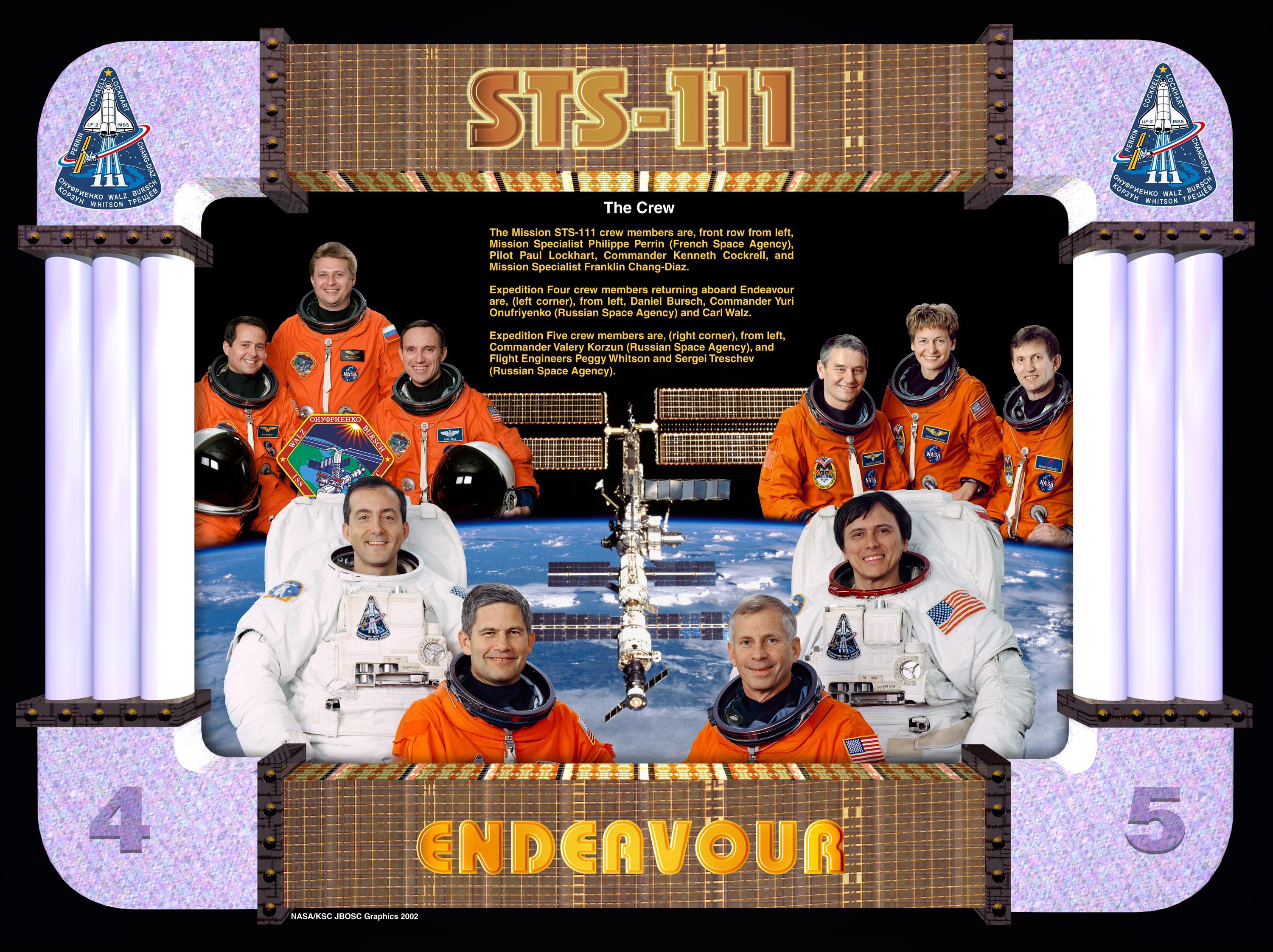 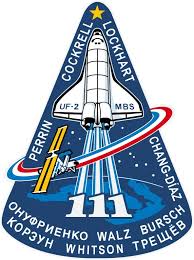 The Endeavour launched on June 5, 2002, and docked on June 7, delivering Station Commander Valeri Korzun and Flight Engineer Sergei Treschev of Russia, and Flight Engineer Peggy Whitson of America. The older individuals among the people arriving on the Endeavour took some kidding from the Expedition 4 crew, who dubbed them “our fathers of the International Space Station.” In fact, Mission Specialist Franklin Chiang-Diaz had just tied STS-110’s Jerry Ross’s record of seven spaceflights and expressed the hope that astronauts who flew that many or more missions would become more common.

The first day was spent on safety briefings, along with briefings between the two Expedition crews on the state of the station. Some initial cargo transfers were also made. The day was marred only by a failure of a Flash Evaporator System Primary controller. The two backup systems were able to pick up the slack and Houston began an investigation.

On June 8, Shuttle Commander Kenneth Cockrell used Endeavour’s RMS to transfer Leonardo to its berth on Unity. As the ten astronauts began unloading it, they reported hearing a growling noise. That noise turned out to be a malfunctioning CMG, one of four used to control the International Space Station’s attitude. Houston sent a command to shut it down and began troubleshooting. The remaining CMGs, along with backup systems, continued to operate well and NASA considered getting a spare CMG they had in storage ready to fly. 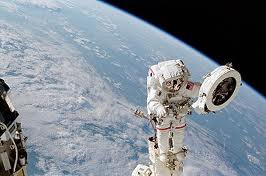 June 9 featured the first spacewalk by Phillippe Perrin from France and Franklin Chang-Diaz. Their first task was to install the PDGA on the P-6 truss segment. The PDGA would be used on a future shuttle mission to move the P-6 segment from its current location on the Z-1 truss to the end of the Port ITS. Chang-Diaz rode Canadarm2 between Endeavour and PMA-1 to collect six thermal blankets in Endeavour’s cargo bay. He and Perrin attached them to PMA-1, where they would be retrieved on another spacewalk and installed on their permanent location on Zvezda. This would bring Zvezda up to American standards for micrometeroid protection. They took photographs of the failed CMG for people on the ground to study, and then went back to Endeavour’s cargo bay and prepared the Mobile Base System (MBS) to be transferred to its new home on the Mobile Transporter. Peggy Whitson and Carl Walz used Canadarm2 to park the MBS on the S-0 Truss Segment, one meter from the MT. Perrin and Chiang-Diaz returned to the airlock.

A smoke alarm caused the crews to push back the change-of-command ceremony until June 10. It turned out to be a false alarm. Canadarm2 transferred the MBS to the MT and controllers on the ground sent up a computer command to close the hatches. 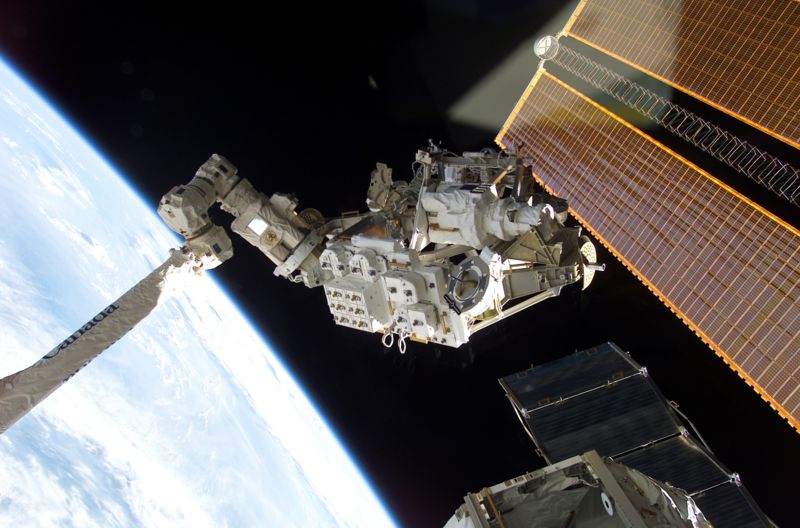 Components for the Mobile Remote Servicer Base System (MBS) are installed during an EVA. Image credit Space TV

Perrin and Chiang-Diaz went out for their second spacewalk on June 11. They finalized the connections between the MBS and Mobile Transporter by hooking up cables for power, data and video. Houston sent up a command to plug the MT’s umbilicals to the S-0 truss. The spacewalkers hooked up the Payload Orbital Replacemant Unit Accomodation (POA), which was a clone of the end-effectors on Canadarm2 and could be used to hold cargo while the Mobile Transporter was in operation. They secured four bolts that completed the installation of the MBS on the Mobile Transporter, hooked up an electrical extension cord and installed a video camera on the MBS to provide a view of future installations of space station components. They took pictures of their work and finished up their spacewalk an hour and a half early. Canadian astronaut Bob Thirsk, who happened to be in the Houston control center at the time, complimented them on a job well done.

The third spacewalk on June 13 was devoted to repairs to Canadarm2, which had been using a backup wrist roll joint since the primary one failed in March. Chiang-Diaz and Perrin swapped out the malfunctioning wrist joint for a new one. Once the new joint was in place, Bursch and Korzun ran Canadarm2 through a series of test maneuvers and declared it operational.

Meanwhile, the crew on the inside began wrapping up cargo transfers. On June 15, Endeavour retrieved Leonardo, the crew said their farewells and the space shuttle departed. The Endeavour spent an extra couple of days in orbit due to bad weather at the landing sites and finally landed at Edwards Air Force Base on June 19.

Brazil informed NASA that it would be unable to produce an agreed-upon EXPRESS rack due to budget problems. Japan also announced a delay in manufacturing the Japanese Experiment Module (JEM) that would push back delivery until 2006. That opened a window for the early launch of ESA and Canadian components that included the Columbus Laboratory Module and the Canadian Special Purpose Dexterous Manipulator, nicknamed Dextere. When rock musician Lance Bass failed to raise the $20 million necessary to buy a seat on the next Soyuz, it opened up a seat for Russian cosmonaut Yuri Lonchakov.