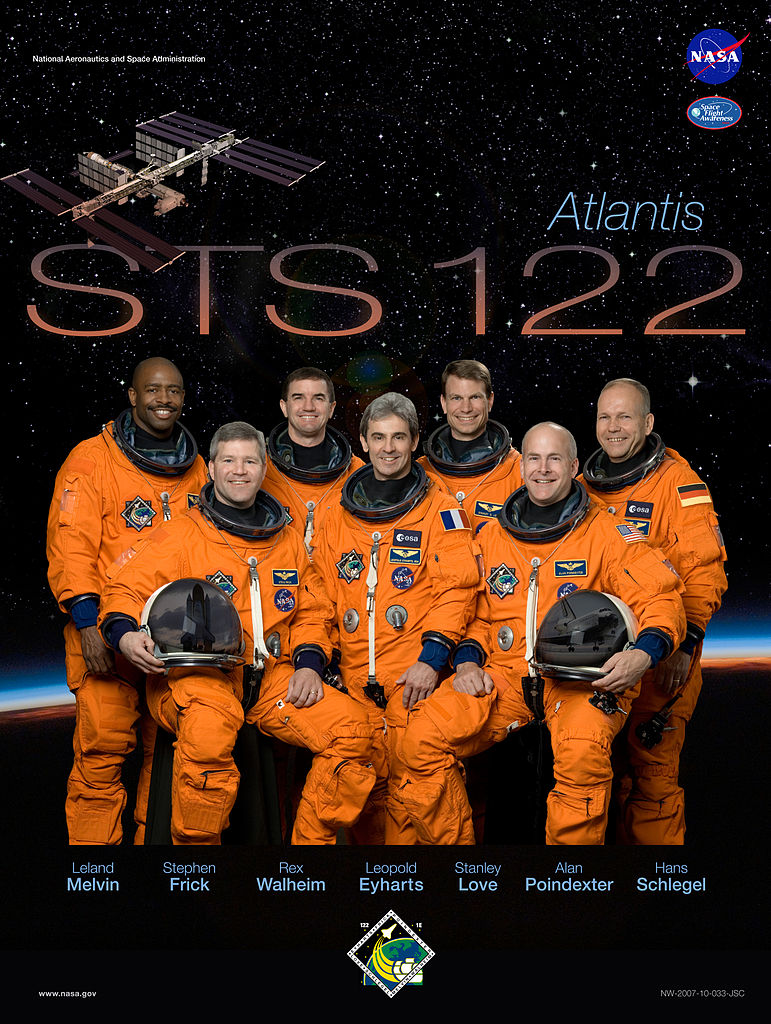 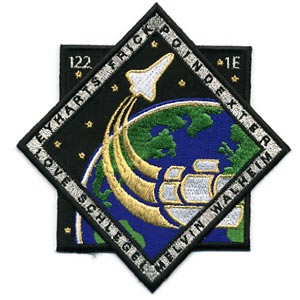 The Space Shuttle Atlantis launched on February 7, 2007 for the STS-122 mission, with the first addition to the station provided by the European Space Agency, the Columbus module. Engine ignition tended to rock the entire stack (External Tank and Orbiter) and Mission Specialist Rex Walheim said of it, “Suddenly you’re riding a wild animal.” The orbiter climbed with an acceleration of not much more than 3 Gs, less intense than the accelerations that Space Race-era astronauts had experienced but still noticeable to the crew. “You’re pushing to breathe,” Shuttle Commander Steve Frick said of it, “then it’s like you’re on a roller coaster at the top of a hill … but it doesn’t drop. It just keeps going.”

STS-122 was the first to dock with the Pressurized Mating Adapter (PMA-2) as it was attached to Harmony on February 9. In interviews, Stephen Frick commented that it was only a little different from his last visit to the station on STS-110. The station had grown since then and there wasn’t quite as much redundancy on the relatively new Harmony module. That meant keeping a closer watch on items that had to happen for docking to be successful, both on the shuttle and inside the station. One of the station computers did experience some difficulties with guidance and navigation software, but the Expedition 16 crew smoothly switched operations to the remaining computers.

After the usual pressurized checks, the hatches were opened. Expedition 16’s Dan Tani brought his couch liner from the Soyuz over to Atlantis and his replacement on the Expedition 16 crew, Leopold Eyharts, performed the same task in reverse. The actual installation of Columbus was delayed by one day because one of the Atlantis crew had been affected by an officially unspecified medical issue. Stanley Love replaced Hans Schlegel on the first planned EVA of the mission and the change in schedule gave him extra time to prepare. Because Atlantis wasn’t equipped to draw power using the Station-to-Shuttle Power Transfer System, this meant the crew had to stretch their power supply to account for adding an extra day to their mission.

Having played football in college, Mission Specialist Leland Melvin compared the in-flight changes to the way a planned play might change according to the defensive setup on a football field. The quarterback and wide receiver spot the change at the same time and adjust the play to suit. Every single STS-122 crew member had trained to back each other up and there had been cases where crew members on various missions got to know each other so well that they could go through training sessions without saying a single word. 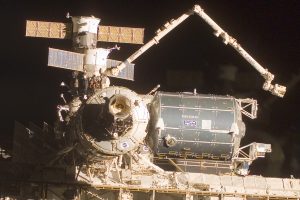 Canadarm2 is used to attach Columbus to the International Space Station. Image credit Logos In Space

On February 11, Stanley Love and Rex Walheim began their EVA. Love described that first egress as, “It was going to be 200 miles down and watch that first step.” They proceeded to the Atlantis’ open payload bay and attached a grapple fixture that the payload bay hadn’t had room for during launch. They also prepared electrical and data connections for their final configuration on the space station. Leland Melvin, Daniel Tani and Leopold Eyharts used Canadarm2 to maneuver Columbus to its berth on the starboard side of Harmony module. They were performing precision work with clearances of maybe a few centimeters while relying on three video monitors. Melvin commented later that his video game skills were very helpful. Meanwhile, Walheim and Love began preparations to replace a large nitrogen tank for the ammonia cooling system. The EVA ended with a duration of 7 hours and 58 minutes.

A Look At The Columbus Module

Most of the actual commissioning of Columbus was done from the inside of the station. The combined crews replaced pressure relief valves and installed intramodular ventilation to insure that Columbus was getting a proper supply of air. They also installed four of the planned experiment racks and the European Transport Carrier for storing experiments and serving as a workbench inside Columbus.

On February 13, Rex Walheim and Hans Schlegel replaced the empty nitrogen tank for the ammonia cooling system with one that had been brought up on Atlantis. Inside the station, crew members used Canadarm2 to place the tank inside Atlantis‘ payload bay. The EVA astronauts took care of some “get-ahead” tasks in preparation for their third EVA. That EVA lasted 6 hours and 45 minutes.

In the meantime, the U.S. Navy announced plans to fire a missile at a failing spy satellite in the hope of breaking it up before it could pose a threat to the Earthbound population. This caused some concern with NASA planners who considered the possibility of cutting the mission short to reduce risk to the Atlantis crew. Although the satellite was at a lower altitude than the station, some of the debris could fly up to a higher apogee. The combined Atlantis and International Space Station crews indicated that they weren’t very worried about it. Expedition 16 Commander Peggy Whitson joked about it, “NASA and the DoD [Department of Defense] love the Station crew as much as they love the Shuttle.” Of course, they could simply ride home on their Soyuz if there was ever any problem. NASA worked out the details with the DoD and the satellite was destroyed after Atlantis returned home.

Rex Walheim and Stan Love began the third and final EVA of STS-122 on February 15. They installed an experiments rack known as SOLAR, which could be used for observations of the sun, and the European Technology Exposure Facility (EuTEF). They also retrieved a malfunctioning gyroscope that had been replaced and stowed on the station exterior and transferred it to Atlantis’ payload bay for return to Earth. For their final task, they inspected a damaged handrail and tested a sample of overglove material to determine whether the handrail could have been the cause of damage to gloves on previous EVAs. They returned to the airlock with an EVA duration of 7 hours 25 minutes.

The Atlantis’ engines were used to boost the station’s orbit in preparation for the arrival of STS-123. The two crews finished up joint operations, and then the STS-122 crew returned to Atlantis during the afternoon of February 17. During the early morning hours of February 18, Alan Poindexter used the Atlantis’ small jets to back away from the station and perform the usual station fly-around. “They sound like cannons going off,” Rex Walheim said of the firing jets. The Atlantis landed on February 20. Expedition 16 Flight Engineer Dan Tani had expected to be the most affected by being back in normal Earth gravity but he kept up with the STS-122 crew very well as they left Atlantis. 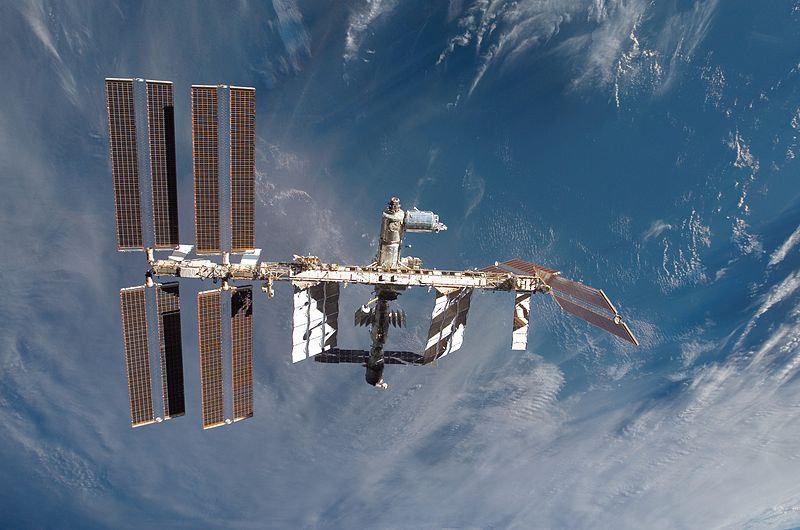