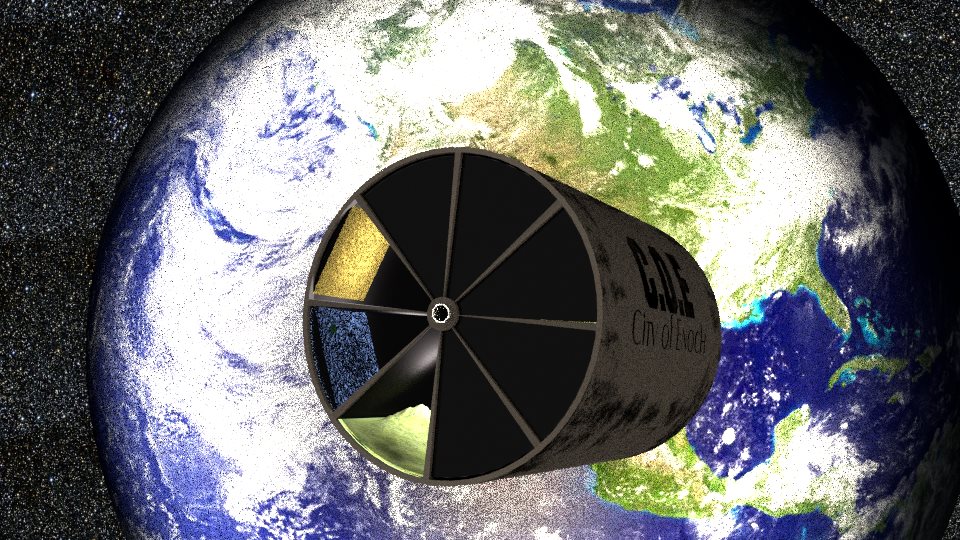 The colonization of Mars is a hot topic lately. Everybody imagines small, but growing, colonies scattered across the surface of Mars and those sketches look good, but the future of settling Mars is not likely to be as neat and tidy as the sanitized versions of the Wild West you see in the movies. When you’re several months’ travel from Earth, you’re not going to count on that planet to send supplies and help quickly when there’s a disaster. That’s not good news for people who are used to the idea of a government agency coming in and helping whenever there’s been a bad storm or earthquake.

There are proposals on the table for an orbiting station that can provide a swifter response time to events on the surface, handle logistical support for activities on a planetary surface and also provide a docking point for incoming ships. One of these is the City of Enoch Project, a pipe-shaped station that can house 150,000 people, provide support for incoming and outgoing ships, and handle support for exploration on the Martian surface. At 19.5 km long and 16.5 km in diameter, its size is a little smaller than the Martian moon Phobos and larger than Deimos.

A space station this size might make launches from Earth uneconomical, so City of Enoch founder Mark Carney said that it could be built using materials mined from the asteroid as a way to save resources in a recent interview. The station can serve as a space mining center to which ships can deliver cargo for processing by docking in the Core level that is basically a gravity-free tunnel running through the center of the station. The crews can disembark through the docking ports and gradually readjust to gravity before going on to the Martian surface. He explains how the station can assist with crews who need to become acclimated to gravity:

“Coming back from Mars, one of my big concerns is that Mars missions that are going to occur before the City of Enoch is built is they’re going to get out there and they’re going to be weakened by their time in zero G. Then they’re going to spend a year in a third gravity and they’ll adapt to that relatively quickly, but then when they launch again to come back, they’re coming from about a third of Earth’s gravity and then traveling for six months back to Earth and then in full Earth’s gravity. I’m not 100% sure the human body can survive the stress of full gravity coming from an extended period of reduced gravity.”

Once the station is built, incoming crews would be able to make use of the different gravity levels available on the City of Enoch to gradually adjust to gravity when returning from long duration missions. These levels will be part of of the City’s organizational structure and will run parallel to its axis of rotation and would include High Gravity, Earth Equivalent Gravity, Reduced Gravity and the microgravity-level Port (Core) level that incoming crews would encounter first. Each level, along with disks that run perpendicular to the axis of rotation, could be sealed off in an emergency like a fire or collision. There would also be zones that would be similar to city zoning plans here on Earth, with each zone being dedicated to a certain purpose like residential, commercial or industrial zones.

“[The telescope] could disprove the Big Bang Theory,” Mark Carney said of it. For reference, the planned James Webb Telescope will dwarf any orbiting telescope we have now with a primary mirror diameter of 6.6 meters and the diameter of any telescope is a major limiting factor in the distance that it can peer into the cosmos. A telescope with a diameter of several miles would be able to provide images that could help astronomers refine their theories or even revolutionize our understanding of the universe. This could make the City of Enoch a favorite destination for astronomers and astrophysicists.

The City of Enoch is still in the concept stage but could be quite useful as a support structure for activities on a planetary surface, as a docking port for interplanetary vessels, and as a home for a scientific community working on the next big breakthrough. Be sure to visit the City of Enoch’s Youtube channel and Facebook page to learn more.