War of the Worlds

This is the radio transmission that caused a panic in 1938 because people thought it was really happening! But what if we humans became the alien invaders who bring war to other worlds?

Some people might see this blog entry as a trifle premature, but it’s worth thinking about. Mars has long been associated with war in classic mythology and we’re now gearing up to travel there. At some point, one group of colonists is going to set up base a little too close to another for comfort. They could end up competing for resources and that will lead to hurt feelings and resentment. The resentment grows into hostility until one group decides to take explosives made out of fertilizer to the other group’s infrastructure. That’s not a very pleasant way to export war to Mars.

Is there room enough on Mars for everybody? Sure there is. Are some organizations that want to set up shop on Mars going to care? Probably not. In fact, some especially belligerent nations that actually have a space program could actually try this tactic and then cry foul when their base has a “critical malfunction” that those who were already there have caused. We can’t count on everybody who is capable of reaching Mars being high-minded enough to care about the future of humanity if they can use some kind of twisted logic to justify trying to crowd out the ones who have already been on Mars for ten or twenty years and are content to just live out their lives on the Red Planet. That’s a bad precedent to set, but it’s a precedent that’s going to happen if controlling the situation doesn’t start on Earth.

You might argue that war will be unnecessary on Mars. At first glance, I am inclined to agree. Two small colonies on opposite sides of the planet will theoretically not have a lot to argue about. The most they should be able to do is shout insults at each other over the radio if they feel the need to vent a little aggression. Things start getting a little more serious when both sides start bringing in their friends who will mostly likely represent their sponsors on Earth. Those two isolated colonies suddenly aren’t so isolated after all. When does it become a necessary war and not just a couple of colonies who dislike each other for reasons known only to them. 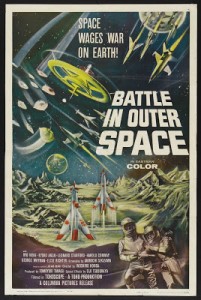 Let’s not fool ourselves. This could really happen at some point. And it probably isn’t going to be us attacking Earth for a long while. Image credit: Weird Posters

The majority of wars right here on Earth aren’t “necessary” ones in the sense that the fate of humanity will hinge on the outcome. If you’re just minding your own business and suddenly an invading army shows up, sure, that’s going to be unpleasant. Then you can get away with fighting in self-defense. Just don’t fool yourself that all of humanity is going to disappear off the face of the planet if you’re defending a small nation that nobody really notices.

However, imagine that the invading army was just the opening salvo in World War II. That would have been really unpleasant. Your little nation couldn’t have even counted on help from the Allies in the early days of the war due to a policy called appeasement. Only, the Allies found out the hard way that appeasement does not work when it comes to dealing with a madman and his goonies any more than “ignoring” the playground bully would have worked when you were a kid. If you were smart, you figured out that the only way to get that bully to respect you is to send him home with a bloody nose and a couple of black eyes. Sure, you might get in trouble for fighting, but it will save you from having to fork over your lunch money every day. From the Allies’ perspective, when it became obvious that Hitler’s goons were the playground bully that only respects people who fight back, then it became a necessary war to defend Europe, Asia and possibly the entire world from the Nazi’s tyranny.

It was most likely a war that none of the Allies really wanted. The United States stayed out of it until provoked by the Pearl Harbor attack. Very few of the people who actually fought in the war actually wanted to be there. World War II was a nasty piece of business that needed to happen to stop a tyrannical madman.

Will we ever get such “necessary” wars on Mars? I hope not. I also hope that we don’t let the pure pacifists keep us from doing what needs to be done if somebody else seems intent on picking a fight. I don’t consider myself a war hawk in the sense that I’m going to be the one who shows up first to all the battles. If I’m breaking people’s noses, that just means I’ve gotten cornered. We can shut down on the massive ones like World War II just by putting our feet down right from the start and making it absolutely clear to the tyrannical types that they’ve crossed the line before it has a chance to degenerate into full-scale war. I would very much prefer that we take a few explosives to one single habitat to take out the tyrant than have to use thousands of kilos of explosives to smack down his army. It’s damage control. Hopefully it will take only a few of those cases before people get the hint that we will enforce Wheaton’s Law, “Don’t be a dick,” and not acting like the playground bully will just become a cultural thing and a matter of being alert enough to recognize certain behavior patterns and applying a little social pressure when necessary.