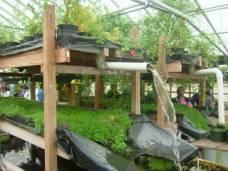 So I’ve already considered hydroponics on Mars. It’s like indoor farming for people who are serious for colonizing other planets. Somebody else suggested to me that maybe we could have an aquaponics system if we really want to go advanced with this concept and I do like the idea of adding fish to the equation. It will be a challenge to make it work, though. I heard from some people who have tried creating a “mini-ecosystem” involving both fish and plants on a small scale that it takes patience and a lot of work to get the balance exactly right.

Not that it won’t be an interesting effort. Imagine being able to harvest the occasional fish for supper when you notice that the population has reached a certain point while gathering 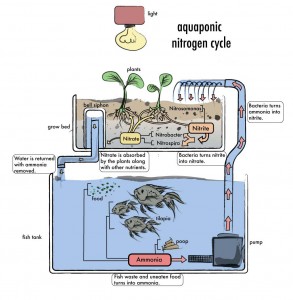 tomatoes for salad. Aquaponics systems combine aguaculture, or fish farming in an enclosed environment, with hydroponics, growing plants in a soil-free environment, to create a theoretical closed system in which the water cycles endlessly from the fish tank to the plants and back to the fish tank. It’s an efficient system that only requires monitoring, maintenance and the occasional adding of the few nutrients that the waste coming out of the fish tank don’t provide to the hydroponics side. A truly good aquaponics system can use only ten percent the water used by hydroponics alone and there are people who claim that they can get hundreds of kilograms of food in six months from a growing area of about 32 square meters of growing space, a little less than the 50 square meters that will initially be provided for greenhouse space with the Mars One plan.

Feeding the fish will be a challenge on Mars because it will be difficult to find prepared fish pellets. Because of this, we’ll probably be limited to the varieties that can thrive on the waste plant materials from the plant-growing side of the system. Tilapia is a favorite herbivorous fish to use in aquaponics with a diet that includes both algae and plant matter. It can withstand lower water oxygen levels and is especially resistant to disease. Get a sudden craving for fish after a month’s worth of vegan meals? Go ahead and harvest one. Tilapia has a good growth rate and most types of fish can be raised at a good enough density to produce a fair amount of protein with a few decent-sized tanks.

Growing enough tilapia to make the system worth it is going to produce waste and lots of it. That waste needs to get from the fish tanks to the hydroponics side through the connecting pipes. Before it gets to the plants, it goes through a system containing microbes that will transform the dangerous ammonia into nitrates that can actually be used by the plants. The plant roots act as a filter that absorbs the nitrates and clean water comes out at the other end. An optional filtration system can keep any remaining contaminants under control after the water has left the hydroponics side and is on the way back to the fish tank.

Sound like a complex system? Sure it is. It’s going to be more complex than either aquaculture or hydroponics by themselves. Users of aquaponics are constantly checking the water to make sure it’s friendly towards both fish and plants. An alert aquaponics user can detect potential problems early by watching for changes in the fish behavior or noting that the plants look a little different. Of course you have to make sure the water is moving from the fish tank to the plant beds and back again without much leaking, and moving parts can become a problem in the most complex systems. You need a place to keep everything where the water can stay at a temperature that the fish like. At excessively frigid Martian temperatures, that can be a challenge unless we have a very good heating system. Think of Alberta, Canada in the winter. It can be colder than typical Martian temperatures, but not by much. However, if we can keep the habitat temperature at something that humans find relatively comfortable, the fish should be fine.

There are two pretty big benefits of combining the two, though. First, you don’t have to worry quite as much about cleaning the tanks like you do with purely aquaculture, or about adding just the right amount of fertilizer to your hydroponics. You really don’t have to add much if you plan on trying it at home. You just need fish food and maybe the occasional dose of the few nutrients that don’t come out of the fish tanks. A Martian aquaponics system will ideally use the plant waste as the fish food.

Second, you have the satisfaction of producing your own food in a way that doesn’t involve a lot of chemicals you can’t pronounce. Fans of self-sufficiency and organic gardening who are ready to go advanced like aquaponics for exactly that reason. You don’t need herbicides and pesticides that might be harmful to both fish and plants. If I had the budget, I would probably have turned my basement into an impressive mini-ecosystem by now. I imagine walling off Martian cave systems and turning them into a real-life, large-scale “Genesis cave” like in the Star Trek movies once we have the resources for large-scale construction. That’s how cool an aquaponics system can be.

Building Your Own Small Aquaponics System

You know you want to. Here’s a way to build an aquaponics system that can fit on a typical desk.

Supplies for an Aquaponics System