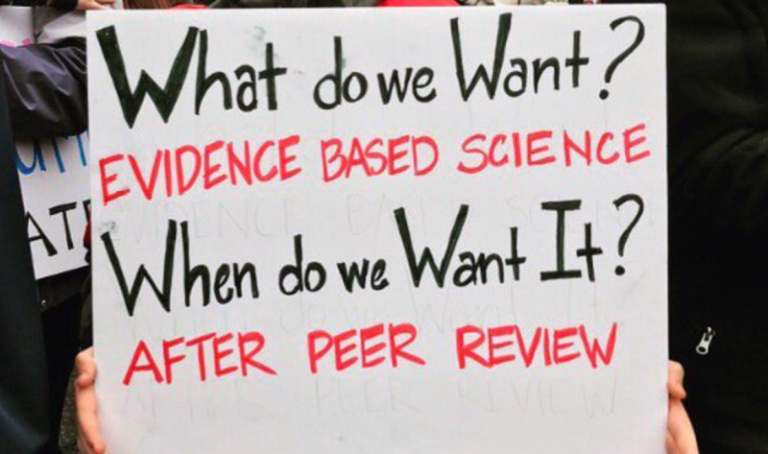 The revolution will be peer reviewed. Image credit Wonderful Engineering

President Donald Trump did not waste any time attempting to muzzle organizations like the Environmental Protection Agency and National Parks Service. Perhaps he did not expect them to fight back, as employees of the National Parks Service did when they created an alternative Twitter account, @AltNatParkSer. @RogueNASA is also (obviously) a rogue Twitter account that can’t even be confirmed as being run by current or former NASA employees.

Now the scientific community is planning a Scientists’ March on Washington in support of STEM careers and education, which is currently scheduled for April 22, 2017. Their platform includes the idea that science should be completely nonpartisan, that scientists should be able to make taxpayer-funded research available to the public without requiring a Freedom of Information Act (FOIA) request, and that topics such as the causes of climate change and evolution as the source of the wide variety of life on Earth should be a matter of data and facts, not political ideology. One goal of the Scientists’ March on Washington is to call attention to the ways that politicians who ignore scientific facts in favor of political ideologies and personal beliefs endanger the entire planet.

Anyone who values imperial science is welcome to become involved with the Scientists’ March on Washington. The organizers intend to be all-inclusive and will welcome anyone who supports science regardless of race, gender, sexual orientation, immigration status or beliefs. They hope that diversity among the participants will send a message to politicians that science does not change due to any of these factors.

For the latest news about the Scientists’ March on Washington, be sure to follow them on Twitter at @ScienceMarchDC, on Facebook, and on Reddit. To help with any aspect of the March, be sure to fill out this form on Google Docs.