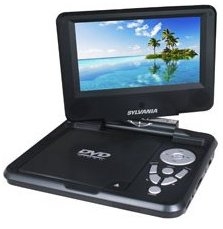 So you want something that can keep your kids entertained on that long driving trip. There will be times when that bag of games and snacks just don’t cut it and you’d rather not have the constant battles and repeated warnings to “cut that out!” You just want to enjoy the trip without having to deal with the kids misbehaving and maybe you’d like to have something to listen to while you’re driving without having the radio tuned to the latest (awful) pop tunes. That’s where a portable DVD player loaded with their favorite movies can come in handy. When the kids finally fall asleep, you can even take a break from the likes of Barney and Disney and pop in a movie of your own on low volume.

The Sylvania 10-Inch Portable DVD Player includes a swivel screen, CD slot and a USB reader along with a rechargeable Li-Ion battery and stereo speakers. If you don’t want to listen to Barney for the umpteenth time or you worry about the volume being too low, you might want to encourage your kid to try using some earphones. One parent who had previously bought Sylvania models and was looking for a replacement reported that it has become a new favorite toy that keeps her child busy while she takes online classes. Finding a DVD player like this for under $90 is pretty rare and it works very well for long car trips when the kids are starting to get a bit cranky. The Sony DVP-FX750 7-Inch Portable DVD Player includes a car charger and AC adapter and supports multiple DVD and CD formats along with MP3 audio files and JPEG slideshows. This makes a good cure for the “I’m bored” blues when everything else fails and also makes a good alternative when that iPod loaded with your favorite tunes starts to get a bit stale. It’s durable enough to take being occasionally dropped, soda spilled on it and other unintended abuse though doing that to electronics on a frequent basis really isn’t recommended. If you have more than one child and can’t take their kiddie movies anymore, the twin headphones are very helpful. As far as image is concerned, it doesn’t really have the “wow” factor of Blu-Rays but it does good for a portable DVD player. A brand-new offering from Insignia, this option features a 9″ screen with a swivel design and up to 2.5 hours of viewing per charge. Get your child to plug in her headphones for easy listening while you drive along in relative silence. The Coby 7-Inch Portable Tablet Style DVD/CD/MP3 Player is about the size of many tablets and features anti-skip circuitry, parental controls, Dolby digital compatibility and digital and analog AV outputs for hooking up to your home theater system. Coby isn’t as well-known as Sony or Panasonic but still knows how to make a DVD player. Because it isn’t one of the big names, you can get more features for the money like the ability to display digital pictures and play music. The picture is pretty good for a 7″ screen and can hold up to a certain amount of abuse. If you worry about the screen getting scratched, maybe you can try one of those screen protectors like you would use for a tablet with a 7″ screen. Overall, it’s a bargain and you really get a lot of accessories with this one. With two 9″ screens, this DVD player cuts down on figuring out the best angle for a screen and you can even have two separate movies going at once during those times when your kids can’t even agree on which movie to watch. The controls are easy to use though there was the occasional gripe about no rewind or fast forward. It’s not a Blu-Ray, but if you’re not trying to compare this DVD player to one, it does well enough for the casual movie watcher or parents who want to keep their kids occupied for a couple of hours. This DVD player impresses with the number of available input options, including a USB slot and an SD card reader along with the ability to recognize JPG and MPEG4 files. It actually includes a remote control to avoid one common gripe with other portable DVD players about the difficulty of reaching buttons from a car seat. With USB and SD slots, this DVD player doesn’t fool around when it comes to playing your movies on a 10.2″ swivel screen with an aspect ratio of 16:9 and Dolby Digital sound.

With a 9″ swivel screen and several input options, this DVD player has a good reputation with teachers who want to show educational videos on an inexpensive system. While it is unfair to compare it to a Blu-Ray system, the picture is pretty good and the sound is excellent for a portable DVD player.

There isn’t much that says, “For Kids!” more than plastering cartoons like Ben 10 on a DVD player. However, this is a decent 7″ portable DVD player that can deliver Ben 10 and other cartoons as good as any and even comes with a cool Ben 10 bag.