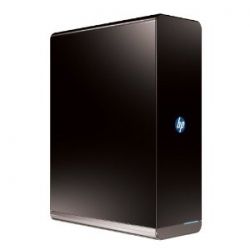 You might have seen those external hard drives and heard that they’re good for backing up your files and also storing extra stuff like videos that you don’t have room for on your regular computer. However, you still wonder if they’re worth buying. Well, I have one of them, and I can honestly tell you that it’s handy for grabbing that important file that I accidentally deleted. Besides, my laptop is good but I know it’s going to go down eventually, so it’s good to know that I won’t lost time and effort because that stuff I’ve been working on is regularly backed up. So, if you’ve been wanting to back up your data but don’t want to spend the money on Carbonite, just buy one of these, remember to use it as often as you edit your important files, and you can just stow it someplace where it’s easy to grab and take with you when the worst happens and you need to get your files back. Do you have some serious backup needs? If so, you might like a hard drive like this LaCie 4big Quadra USB 3.0 12TB External Hard Drive. It’s 12 Terabytes of serious storage, USB 3.0 for faster speed and backwards compatibility with USB 2.0, and can be hot-swapped for speed and security. Don’t mess around if you have a business in which your data is critical or you’re just a media freak who knows perfectly well that will happen to all your cool videos when your computer crashes. The My Book Thunderbolt Duo 6 TB Dual-Drive Storage is an impressive 6 TB of backup space with two hyperfast Thunderbolt ports to speed up your backups. Choose from two drives (RAID 0 or RAID 1) for your backups. It claims to be user serviceable though I would only recommend this if you actually have some knowledge of computer hardware. Some reviewers would have liked to have a couple of USB 3.0 or 2.0 ports along with the Thunderbolt but had few complaints otherwise. It’s fast and it’s quiet. 6 TB might be overkill if you don’t have multiple computers to back up or if you’re not a media junkie, but one person did recommend buying two of these and using liberally in case one tanks. The Seagate Backup Plus 4 TB USB 3.0 External Hard Drive features USB 3.0 and can be upgraded to Firewire or Thunderbolt for faster speeds. It can be formatted as NTFS to work with Mac and then it works with both PC and Mac. One reviewer recommended NOT installing the Seagate Dashboard software with extra features because this can cause problems, but otherwise liked this as a backup device. (There is a way to remove the software, though.) It can run for more than an hour without getting overheated and did a 320GB disc image in 45 minutes. It’s kind of tough to beat 4 TB for the price. The Seagate Expansion 3 TB USB 3.0 Desktop External Hard Drive includes a power supply and USB 3.0 cable for easier connecting to your laptop or computer. This is a particularly good option if you have been procrastinating about backing up your files and need to do it NOW. There were some complaints about lack of a cooling option for a device designed to be always on. It is a hard drive and hard drives wear out, but this one can last a while if properly managed and it’s good for its intended purpose. The Western Digital My Book Studio 3 TB Hard Drive is specifically designed to be used with Macs and is compatible with Apple Time Machine. Set a password and use the hardware encryption for extra security in your backups. Reviewers like that it’s small enough to be stuck in a drawer if your desktop is already crowded and FireWire makes this backup unit fast. The operation is quiet. It’s not a bootable backup, so if that’s what you’re expecting, you’re going to be disappointed. Most reviewers agreed that it’s nice to see a hard drive designed specifically for Macs that isn’t a problematic second-rate hard drive. The Toshiba 3TB Canvio Desk Desktop External Hard Drive is compatible with USB 3.0 and 2.0, features a pre-loaded backup software and three-year warranty, and has enough room to back up multiple desktop and laptop computers. The “mutant cable” some reviewers complained about might have been either an error made while packing their order, or a misunderstanding about which end of a cable goes into which slot, because the one I got worked fine. It doesn’t hang up very often, and when it does, just make sure the cable is hooked up correctly and restart it. If it does this multiple times in a row, try getting in touch with Toshiba’s customer service because a three-year warranty is good for something. Unless you have a desktop with a 3TB internal hard drive, and most people don’t, it really can back up just about every computer you own. The Toshiba 2 TB USB 3.0 External Hard Drive is compatible with USB 3.0 and 2.0, makes it easy to drag and drop files to its storage and has a 3-year warranty. It has no VCD, formatting or transfer problems and reviewers reported transfer speeds between 26 and 51 MB/second depending on what you’re doing with it at any given moment. It boots within 5 seconds which is unusual for hard drives released in 2011 and most computers have no problems finding it. If you don’t want to reformat it to use with a Mac, I recommend getting an Iomega (see above) but otherwise it works fine for most backup needs. The Fantom GreenDrive Pro 2 TB USB 2.0/eSATA External Hard Drive features USB 2.0 and eSATA operation with 32MB cache, preformatted in NTFS (which stands for New Technology File System if you’re curious) and is compatible with PCs and Macs. Reviewers commented that it works great for its intended purpose as a backup drive, though there were a few gripes about poor customer service and an unreliable eSATA port. It’s a “green” drive, so it will take a few seconds to “spin up” when you want to do something with it. As one reviewer noted, drives do fail so he recommended buying two external hard drives so you have a backup for your backup (and also tweaking the “Disk Management” tool if you worry about eSATA failing). This one lasts a good amount of time, though. The Fantom G Force 2TB USB 3.0 External Hard Drive is compatible with Windows and Mac with a USB 3.0 connection and 3-year warranty. Reviewers like the quiet and quick operation, the 3-year warranty and the fact that it comes pre-formatted. It works with Windows Vista and 7 (no word on Windows 8 yet), Windows Server 2003 and 2008, and Mac OS X 10.5 and later. The USB 3.0 connection is noticeable faster than 2.0 so it’s good to know that the Phantom G-Force is getting full use out of the USB 3.0 standard. If you’re using this for an intense backup job, you might want to do it in stages to keep it from overheating and/or crashing. Otherwise, it’s a good external hard drive for your backup needs. Silicon Power Rugged Armor Portable External Hard Drive features compatibility with USB 3.0 and 2.0 with anti-pressure and anti-dust features and compatibility with military standards for drop resistance and water resistance. Reviewers were impressed that somebody took the time to design an external hard drive that can be dropped into dishwater without a problem though nobody wanted to try it or even drop it from a height greater than about 3 feet. You’ll have to convert the formatting from FAT32 to NTFS if you want to store files larger than 4 GB. Read/write is fast. One might hope that the company releases a 3-TB or 4-TB version of this but it’s pretty good if you want to back up your data and then not worry about dropping it.